The incidence and prevalence of Crohn’s disease (CD) are increasing globally. The efficacy of elemental nutrition (EN) for CD has been reported for decades. Recent studies demonstrated that elemental diet (ED), one of the types of EN, which contains individual amino acids, sugars (mono- or polysaccharides), and low fat, improves the anti-TNFa antibody therapy outcome by reducing the loss of response and has the preventive effect against the postoperative recurrence. Given its excellent safety, ED can be a promising concomitant therapeutic option for CD. However, the underlying mechanisms of ED remain unclear. Imbalance of the gut microbiota, dysbiosis, is thought to be involved in CD pathogenesis. Meanwhile, diet influences gut microbiota. We hypothesised that ED exerts clinical efficacy by shifting the gut microbiota to the anti-inflammatory environment. We also believe that investigating human samples is crucial to obtain mechanistic insights into ED therapy, considering species-specific differences in interactions between the host and microbiota. In this study, we examined the impact of ED on the intestinal bacterial compositions as well as metabolites in human subjects.

Four healthy individuals participated in the study. The subjects continued their dietary habits for 2 weeks after the registration of the study and then replaced 900 kcal/day of their regular diet with 900 kcal/day of ED (time point 1, T1). ED was continued for 2 weeks (T2). After the withdrawal of ED, subjects resumed their original dietary habits for 2 weeks until the endpoint of this study (T3). Faecal samples were collected from all subjects at all time points, T1-3. Faecal DNA and metabolites were extracted and analysed with 16S rRNA gene amplicon sequencing and metabolomic analysis, respectively. This study was approved by the Institutional Review Board of Kyorin University School of Medicine (IRB No. 720) and performed in accordance with the principles of the Declaration of Helsinki.

Interindividual differences were observed in the gut bacterial compositions (Figure 1) as well as metabolites (Figure 2) at all time points. Changes over time varied among subjects. On the other hand, some bacteria (e.g. and ) and metabolites including short-chain fatty acids and bile acids changed significantly between time points among the 4 subjects. The bacterial and metabolite profiles at T3 were different from those T1 in all subjects. 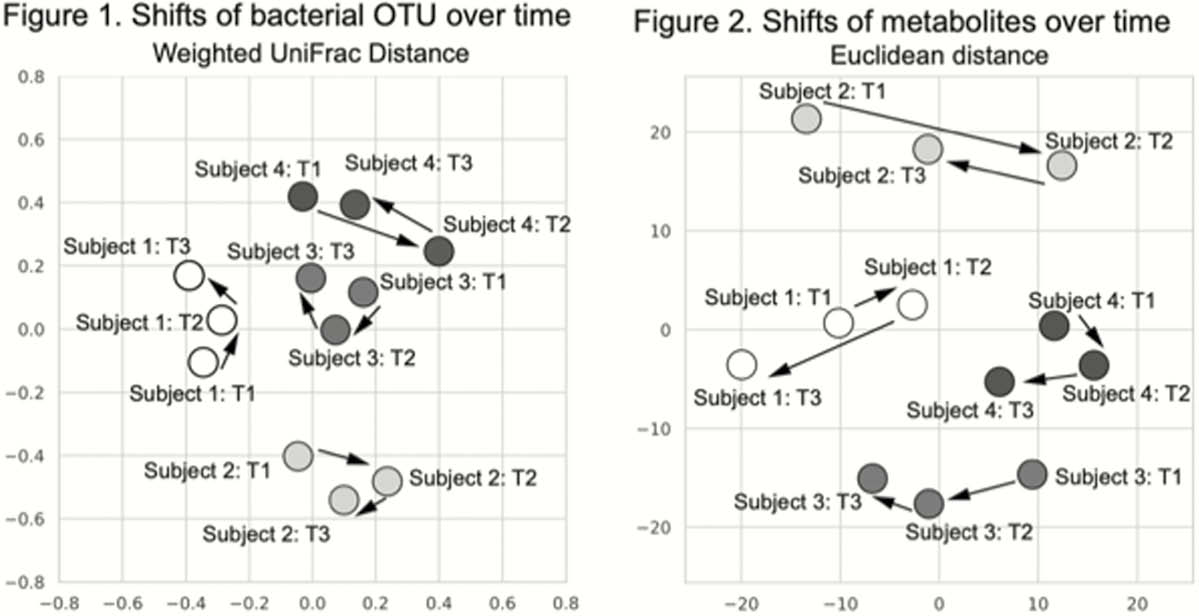 The alterations of the gut microbiota induced by ED vary with each individual. Some microbes and metabolites change commonly across the subjects. ED may have a lasting effect on the gut environment even after the withdrawal.