Ulcerative Colitis (UC) associated single nucleotide polymorphisms (SNP) are mostly in non-coding regions of the genome. Because of that, it has been challenging to determine their role in the disease onset and severity. We have previously developed an integrative workflow (termed iSNP) to understand better how these SNPs are involved in the pathogenesis of UC. Here we present a recent update both in the methodology and new results, including a new player for prediction of therapeutic escalation in UC.

From immunochip data of 376 UC patients of an East-Anglian, UK cohort, the SNPs were filtered for only the UC-associated ones. Then we predicted the SNPs’ effect on regulatory interactions using two complementary transcription factor-target gene prediction methods, RSAT and FIMO. SNPs were considered if the SNP was located in the promoter region of a gene or in an enhancer region of a gene defined by the HEDD database. We considered a gene ‘SNP-affected’ if the risk allele and the non-risk allele had different transcription factor binding sites detected by any of the two methods. The proteins encoded by the SNP-affected genes were mapped to the integrated and high-confidence signaling network resource OmniPath. We also identified the direct physical interactors (first-neighbours) of these SNP affected genes/proteins. We created networks for each patient separately using their individual SNP-profiles. Finally, based on these patient-specific networks, we clustered patients in an unsupervised manner.

We found 15 UC-associated SNPs which affected transcription factor binding sites, which in turn were modulating 54 genes. From these 54 SNP affected genes, 29 coded proteins that were present in the OmniPath signaling network. The patients formed five clusters, which were significantly correlated with therapeutic escalation defined by mesalazine or other more advanced therapy (p <0.05). Patients requiring immunomodulatory treatment have a greater prevalence of  SNP RS943072 (G), corresponding to the transcriptional regulation of VEGF (vascular endothelial growth factor). VEGF is elevated in UC and stimulates angiogenesis, which is involved both in tissue regeneration and inflammation. VEGF is upregulated in the presence of this risk SNP causing increased inflammatory phenotype. 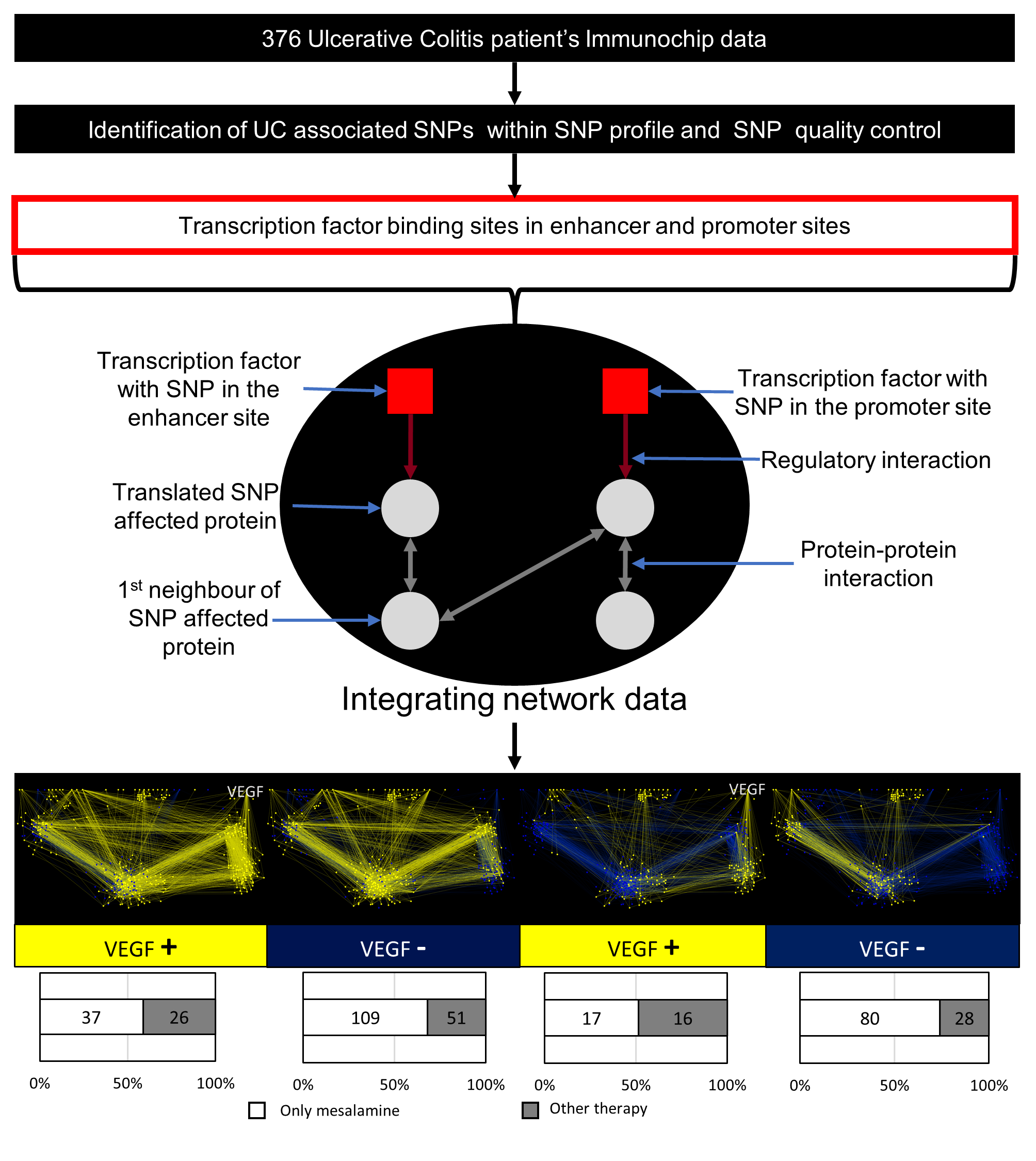 We updated the iSNP method by including enhancer regions and multiple transcription factor binding site prediction methods, and were able to predict that those UC patients who have a VEGF-affecting SNP require therapeutic upscaling.