Inflammatory bowel diseases (IBD) are characterised by intermittent relapses and their course is heterogeneous and often unpredictable. The ability of protein, metabolite, or microbial biomarkers to predict relapse in patients with quiescent disease is unknown.

This prospective study enrolled patients with quiescent Crohn’s disease (CD) and Ulcerative colitis (UC) defined as absence of clinical symptoms (HBI < 4, SCCAI < 2) and a colonoscopy within the 1 year prior with endoscopic remission. The primary outcome was relapse within 2 years, defined as symptomatic worsening accompanied by elevated inflammatory markers resulting in a change in therapy, or IBD-related hospitalisation or surgery. Metabolomic and proteomic profiling was performed on serum samples and stool samples underwent shotgun metagenomic sequencing on Illumina HiSeq platform. Biomarkers were tested in a derivation cohort and their performance examined in an independent validation cohort.

Our prospective cohort study included 164 patients with IBD (108 CD, 56 UC). Upon follow-up for a median of 1 year, 22 patients (13.4%) experienced a relapse. Three protein biomarkers (IL-10, GDNF, and CD8A) and four metabolomic markers (propionyl--carnitine, carnitine, sarcosine, and sorbitol) were associated with relapse in multivariable models at < 0.05. Proteomic and metabolomic risk scores, defined as the tertile sum of the serum levels of these biomarkers independent predicted relapse with a combined AUC of 0.83. This risk score clearly differentiated relapsers from those who remained in remission in both the derivation and validation cohort (Figure 2). A high proteomic risk score (OR 9.11, 95% CI 1.90–43.61) or metabolomic risk score (OR 5.79, 95% CI 1.24–27.11) independently predicted higher risk of relapse over 2 years. Faecal metagenomics from 85 patients demonstrated increased abundance of ( 0.0019, = 0.019) and ( 0.0040, q=0.020) and at the species-level ( 0.000008, = 0.0009) among relapses. Proinflammatory changes in the microbiome correlated with the metabolomic and proteomic perturbations associated with relapse.

Kaplan–Meier curve describing time to relapse in patients with quiescent Crohn’s disease and ulcerative colitis, stratified by the proteomic (a) or metabolomics (b) biomarkers of relapse 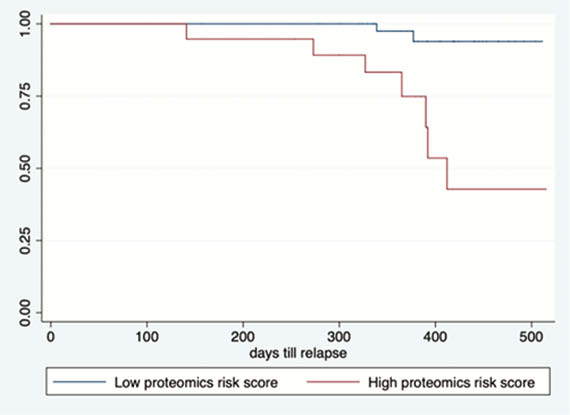 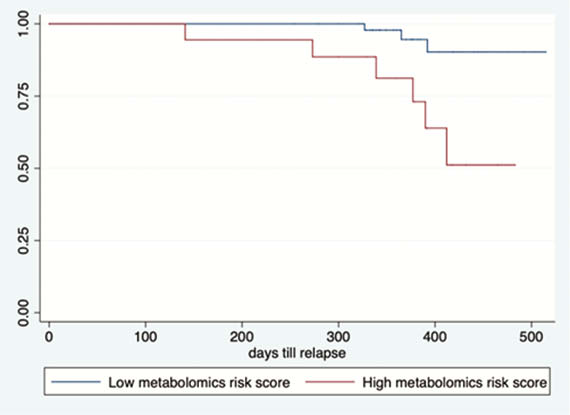 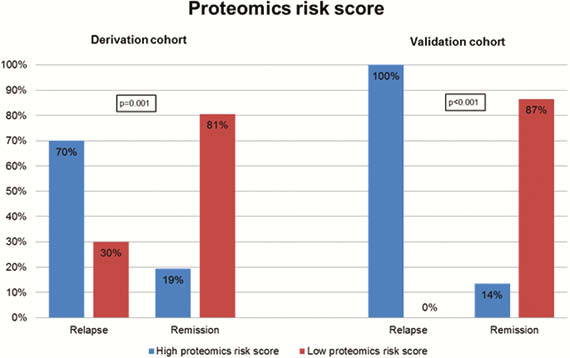 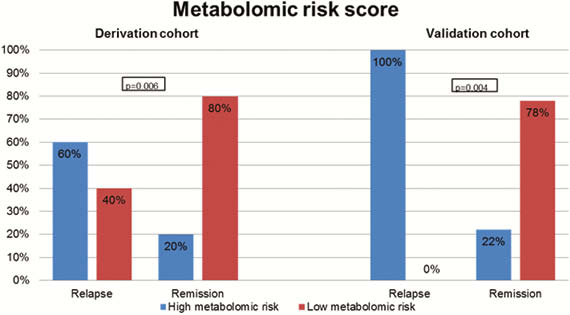