Under normal physiological conditions, colonic crypts accrue ~40 somatic mutations for every year of life. That somatic mutations contribute to the development of cancer is well established, but their patterns, burden and functional consequences in diseases other than cancer have not been extensively studied and our understanding of the effects of chronic inflammation on the mutational profile and clonal structure of the colon is limited. Here, we investigated how the recurrent cycles of inflammation, ulceration and regeneration seen in IBD impact the mutational and clonal structure of intestinal epithelia.

We isolated and whole-genome sequenced ~400 individual colonic crypts from 46 IBD patients and compared these to ~400 crypts from 41 non-IBD controls. We compared the mutation burden, mutational signature exposure, clonal structure and cancer driver mutation landscape in crypts from actively and previously inflamed regions with crypts dissected from controls.

We estimated the base substitution rate of affected colonic epithelial cells to be doubled after IBD onset. This change was primarily driven by acceleration of mutational processes ubiquitously observed in normal colon (Figure 1), and we did not detect an IBD-specific mutational process. In contrast to the normal colon, where clonal expansions outside the confines of the crypt are rare, we observed widespread millimetre-scale clonal expansions, even in the absence of mutations in , and (Figure 2). We discovered that mutations in and genes in the interleukin 17 and Toll-like receptor pathways, were under positive selection in colonic crypts from IBD patients (Figure 3). With the exception of , these genes and pathways have not been previously associated with cancer risk. A previously published mouse model of suggests that LoF mutations in this gene may facilitate healing of affected mucosa without promoting tumorigenesis. This could make the encoded protein an attractive drug target. The observed enrichment of mutations in PIGR and IL17 and TLR pathways suggests that somatic mutations may initiate, maintain or perpetuate IBD pathogenesis through disruption of microbe-epithelial homeostasis. 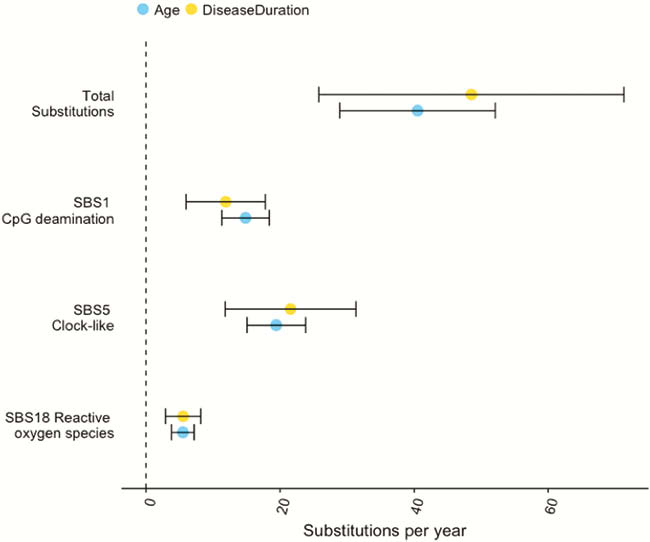 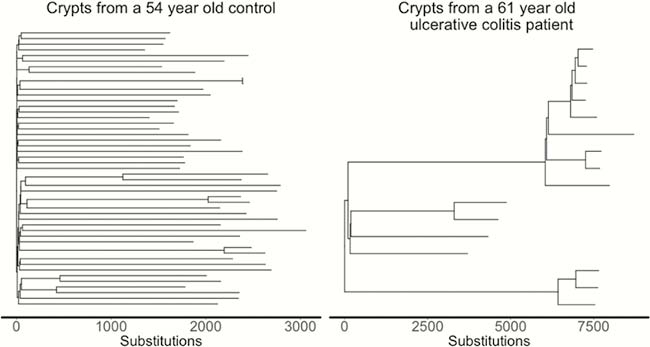 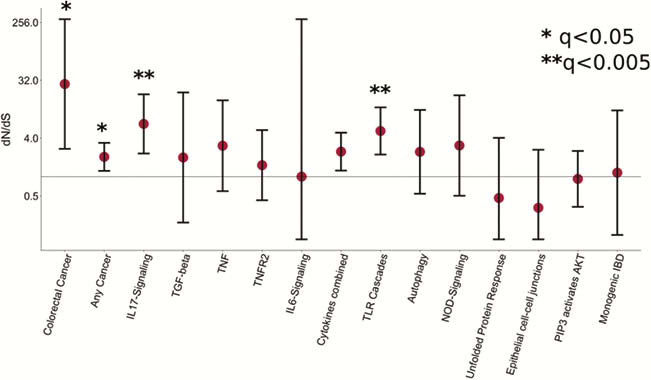 Our results provide new insights into the consequences of chronic intestinal inflammation on the mutational profile and clonal structure of colonic epithelia. We identify the mutagens driving the increase in mutation burden and mutations which are under positive selection in the context of inflammation. Our results suggest that studying somatic mutations in the colon can reveal putative drug targets and pathogenic mechanisms for IBD.