Previously, we identified subsets of biologic-naïve patients (pts) with Crohn’s disease (CD) from the EVOLVE study who had higher rates of clinical remission (CR) [Fig 1] when initiating vedolizumab (VDZ) vs anti-TNFα treatment, using prediction models based on multiple baseline characteristics.1,2  To aid use in practice, we investigated whether these subsets could be identified using simpler rules based on fewer baseline characteristics.

Using data from EVOLVE, we used recursive partitioning and regression tree (RPART) classification to predict membership in the previously identified higher CR subsets for VDZ. The RPART algorithm repeatedly splits data, based on baseline predictors (demographics, prior treatments, clinical characteristics at treatment initiation, Charlson comorbidity index, prior extraintestinal manifestations [EIMs], and prior healthcare resource use). At each split, the predictor and its value as chosen by the algorithm to split the data were those that maximized the number of pts classified correctly. Simplified rules were developed from the resulting RPART decision trees. Analyses of the treatment effect of VDZ vs anti-TNFα were conducted in the subsets of pts identified by each rule.

Pts with data on CR and candidate predictors were included (VDZ [n=195]; anti-TNFα [n=245]). Three simplified rules (A, B, & C) were identified (Table 1). Pt characteristics included in the rules (exacerbation ongoing at treatment initiation, no emergency department/emergency room (ED/ER) visits prior to treatment initiation, no fistulae at most recent assessment prior to treatment initiation, pre-initiation disease behaviour) were among the main predictors of CR in VDZ pts identified previously. Pts identified by Rule A comprised 32% of the EVOLVE population, and were those who 1) had an exacerbation ongoing at index, 2) did not have ED/ER visits prior to initiation and 3) had pre-initiation disease behaviour classified as other than stricturing with/without perianal disease. Among these pts, median time to CR for VDZ and anti-TNFα pts were 6.7 and 18.1 months, respectively (unadjusted log-rank p<0.001), and the adjusted hazard ratio (HR) of CR for VDZ vs anti-TNFα was 2.9 (95% CI: 1.7, 5.0). Rules B & C identified larger subsets in which VDZ vs anti-TNFα treatment differences were smaller but still statistically significant.

Simple rules were developed to identify biologic-naïve, CD pts in whom VDZ initiation appeared to have a larger effect on CR relative to anti-TNFα initiation. Validation of these rules in other data sources is important to confirm these findings; if validated, these simplified rules can inform targeting of treatment and optimization of outcomes for pts with CD treated with VDZ. 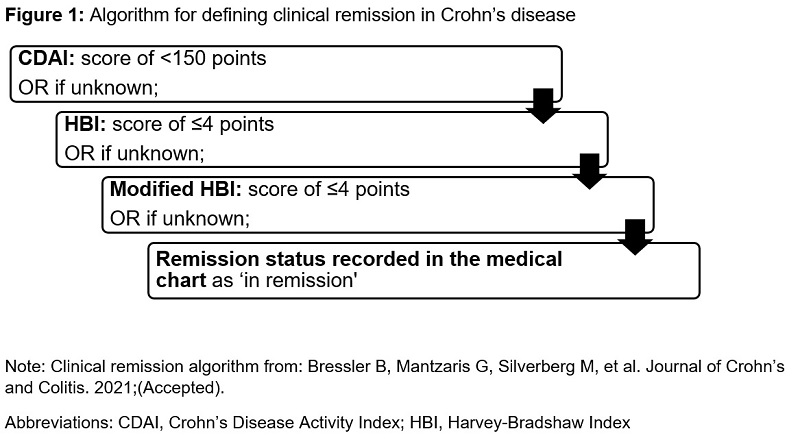 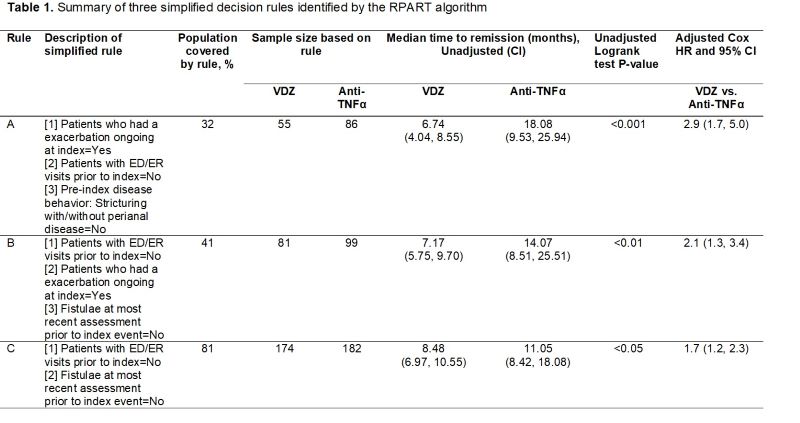