DOP61 Impact of prior tumour necrosis factor inhibitor failure and prior corticosteroid use on the maintenance of efficacy of tofacitinib following dose reduction in patients with Ulcerative Colitis who were in stable remission: 6-month data from the doub

Tofacitinib is an oral, small molecule JAK inhibitor for the treatment of ulcerative colitis (UC). RIVETING (NCT03281304) is an ongoing, double-blind, randomised, parallel-group study designed to evaluate the efficacy and safety of dose reduction to tofacitinib 5 mg twice daily (BID) vs remaining on 10 mg BID in patients (pts) with UC in stable remission on tofacitinib 10 mg BID maintenance therapy. Eligible pts had received tofacitinib 10 mg BID for ≥2 consecutive years in an open-label, long-term extension (OLE) study (NCT01470612), and had been in stable remission for ≥6 months (M) and corticosteroid (CS)-free for ≥4 weeks prior to enrolment.1 We aimed to evaluate tofacitinib efficacy outcomes by the number of prior tumour necrosis factor inhibitors (TNFi) failed and by prior CS use.

Of pts who enrolled into RIVETING, 26 pts were receiving CS (9 received <15 mg/day and 17 received ≥15 mg/day) at induction study BL, and 7 pts were receiving CS at OLE study BL. At Month 6, rates of mMayo score remission were numerically higher in pts with CS use at induction study BL (84.6%) vs those without CS use (72.7%). The rate of mMayo score remission was numerically higher in pts without CS use (77.8%) vs pts with CS use at OLE BL (71.4%), although pt numbers were very low in the CS-use group. These trends were also observed for other efficacy endpoints (Table 2). The Month 6 change from RIVETING BL mMayo score and total Mayo score was numerically higher in pts with vs pts without CS use at induction BL (0.7 and 1.1 vs 0.6 and 0.9, respectively) and OLE BL (1.0 and 1.3 vs 0.6 and 0.9, respectively) (Table 2). 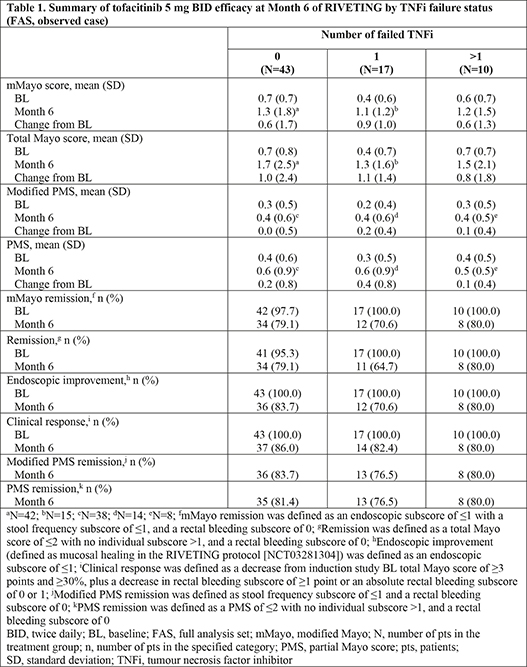 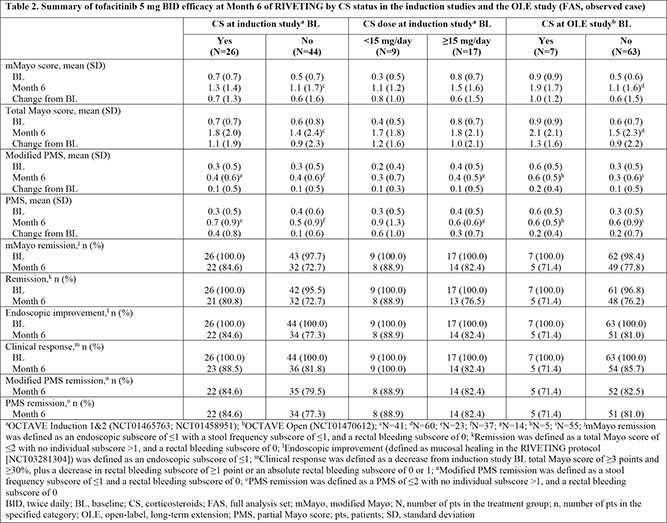 In pts who were in stable remission for >6M, efficacy endpoints were maintained following dose reduction to tofacitinib 5 mg BID, regardless of the number of prior TNFi failures or prior CS use. These analyses are post hoc and limited by the small sample size.