Tofacitinib is a partially selective Janus kinase inhibitor that was approved for the treatment of refractory moderate to severe ulcerative colitis (UC) in 2018. We report the real-world clinical effectiveness and adverse effects of tofacitinib in UC.

We conducted a retrospective observational cohort study of tofacitinib-treated patients with UC between October 2018 to October 2019 from 4 UK centres. Disease activity was assessed using the Simple Clinical Colitis Activity Index (SCCAI) or Partial Mayo Score (PMS) depending on the study site. Response and remission were defined at week 8 and 26 as a reduction in SCCAI or PMS of ≥3, and SCCAI <3 or PMS <2, respectively. Corticosteroid-free remission was defined as remission with no corticosteroid use at the time of assessment irrespective of baseline corticosteroid status. 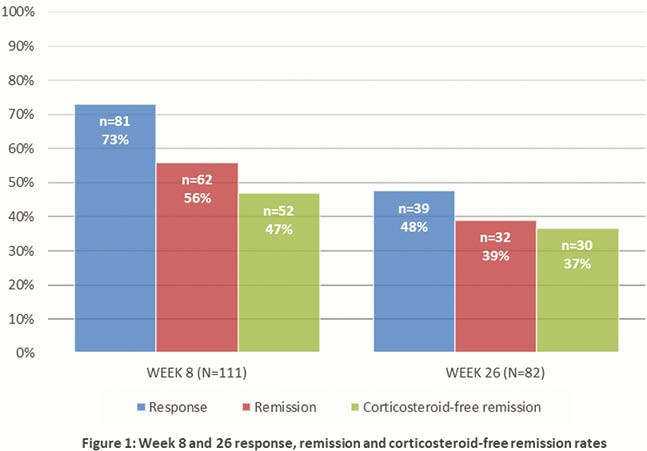 Clinical effectiveness and side-effect profile of tofacitinib in UC in this multi-centre real-world cohort were similar to that reported in the pivotal OCTAVE clinical trials.