DOP78 Intestinal surgery rates in ulcerative colitis and Crohn’s disease in the era of biologics: A Danish Nationwide Register Study from 2003 to 2016

Biologic response modifiers (biologics) has been introduced as potent drugs for the treatment of Crohn’s disease (CD) and ulcerative colitis (UC). Whether this has resulted in a reduction in the need for surgical treatment is controversial. This study aims to explore the surgery rates of patients diagnosed with CD and UC between 2003 and 2015 and correlate to those treated with biologics or not in Denmark with a follow-up until 2016.

This national register study included patients diagnosed between 2003 and 2015 and followed up until 2016, identified in the Danish National Patient Registry (NPR). Biologic therapies available in (parts of) the study period were infliximab, adalimumab, vedolizumab and golimumab. Surgery rates were identified through three types: bowel resections (code KJFB), total colectomies (code KJFH) and resections and excisions of the rectum (code KJGB). The share of patients undergoing surgery or initiating and receiving biologic treatment in each year was analysed. Additionally, patients undergoing surgery were stratified to receiving biological treatment in a period before the surgery or not and the time to first surgery was investigated.

Among 10,302 CD patients and 22,144 UC patients, 2,328 CD patients and 2,128 UC patients underwent intestinal resection. Numbers were driven by the two first surgery codes (97% for CD and 93% for UC), and >1 resection was observed in 20% of the CD cases and more in the UC cases (40%), as expected due to reoperations. In the same period, 2,939 and 2,504 patients were treated with biologics for CD and UC, respectively, with an increase observed over the years. The vast majority were treated with an anti-TNF-α biologic, as vedolizumab was not approved in Denmark before 2015. We observed similar surgery rates of patients receiving biologics compared with those not treated with biologics. However, the time period from diagnosis to first intestinal surgery was observed to be longer for the patients treated with biologics (Figure1). 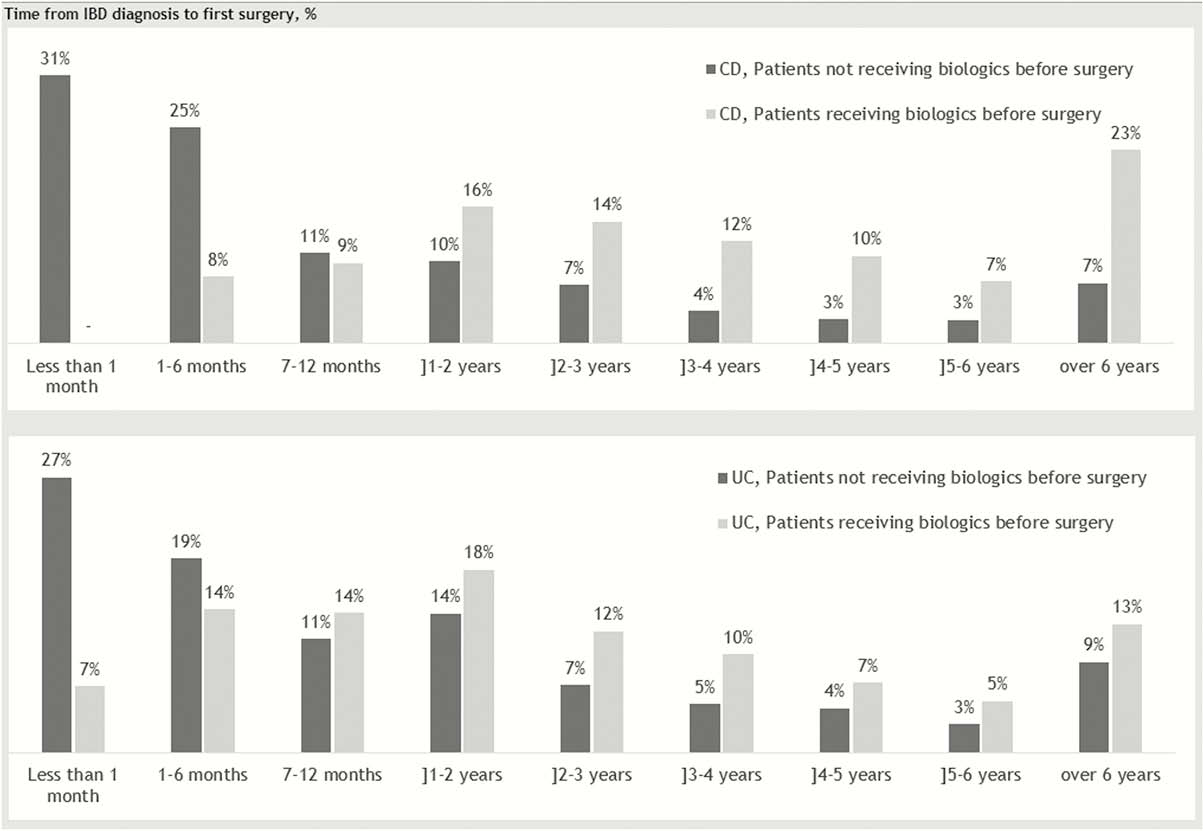