Ustekinumab (UST) is an IL12/23 blocker approved for use in Crohn’s disease and ulcerative colitis (UC). In the UNIFI maintenance study of patients (pts) with moderate-severe UC, >90% of the pts who achieved clinical response or remission at week (wk) 44 were able to eliminate corticosteroids, an important goal of therapy. In this analysis, we describe the corticosteroid-sparing effects of UST treatment through 3 years among pts who were treated in the UNIFI long-term extension (LTE).

523 intravenous UST induction responders were randomized to SC maintenance therapy (SC placebo [PBO], n=175; UST 90mg every 12 wks [q12w], n=172; or UST 90mg q8w, n=176). 284 UST pts who completed wk44 entered the LTE. PBO pts were discontinued after wk44 unblinding. Based on the investigator’s clinical judgement of their UC disease activity, pts in the LTE were eligible to receive dose adjustment starting at wk56: PBO to q8w, q12w to q8w, and q8w to q8w (sham adjustment). Pts in PBO or q8w groups were only eligible for dose adjustment or sham dose adjustment before unblinding. Efficacy was evaluated in randomized pts using symptomatic remission (Mayo stool frequency subscore of 0 or 1 and a rectal bleeding subscore of 0).

During the maintenance study, all pts receiving corticosteroids at maintenance baseline were required to initiate tapering. Through wk152 of the LTE, symptomatic remission endpoints were calculated with treatment failure and missing data nonresponder imputation, and dose adjustment was not considered to be a treatment failure. Missing corticosteroid dose data was managed using last observation carried forward.

UST maintenance therapy, with both q8w and q12w dosing regimens, was effective in reducing and eliminating the use of corticosteroids in pts with UC through 3 years. Through 3 years of treatment with UST, the majority of pts in symptomatic remission were corticosteroid free. 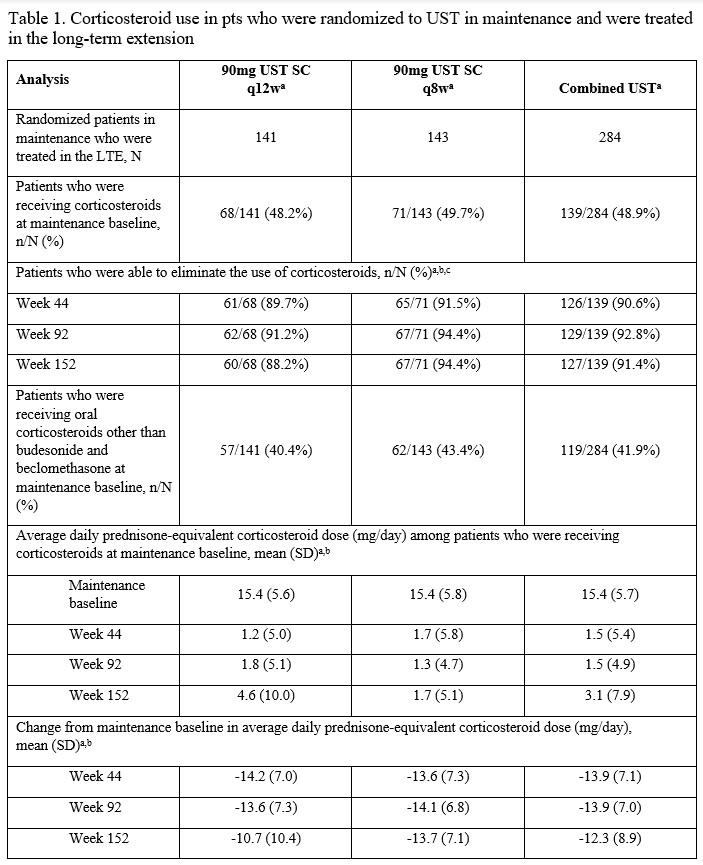