Breastmilk (BM) is a complex fluid that contributes to shaping the immune system of the offspring. BM composition depends on stage of lactation, maternal health status and diet, environment, and genetics. Limited data exists on the composition of the BM from women with IBD and its potential impact on the newborn’s microbiome composition.

The MECONIUM (Exploring MEChanisms Of disease traNsmission In Utero through the Microbiome) study is a prospective cohort study including pregnant women with IBD, pregnant healthy control (HC), and their offspring. BM samples were collected 2 weeks post-delivery. Stool samples from the offspring were collected throughout the first 3 years of life and used to assess faecal calprotectin (fCal) and gut microbiota composition (16S). Targeted proteomics of the BM samples was performed with the Olink inflammation panel (92 protein biomarkers). Correlations between specific proteins in the BM, fCal and 16S were assessed using non-parametric tests. Multiple testing correction was performed with false discovery rate (FDR). MaAsLin2 R package was used for multivariate testing.

236 BM samples were analysed: 174 from HC, 37 Crohn’s disease (CD), 25 ulcerative colitis (UC). Thymic stromal lymphopoietin (TSLP), a cytokine with an important role in the maturation of T cells, was significantly lower in BM of women with IBD vs HC (FDR p=0.0017). The levels of TSLP in the BM of the mothers correlated negatively with infant fCal at year1 (rho=-0.20, p=0.01), and with the relative abundance of Cronobacter (MaAsLin2 FDR 0.1) of the offspring at month 1. Chemokine (C-C motif) ligand 20 (CCL20), which acts in chemotaxis of dendritic cells and T-cells and B-cells, was also significantly lower in women with CD vs HC (FDR 0.013) and in women with CD vs UC (p=0.014). Matrix metalloproteinase-1 (MMP-1), a collagenase involved in the breakdown of extracellular matrix, was also lower in BM of women with CD (p=0.009) and a negative correlation was observed between the levels of MMP1 and fCal at 3 months and 1 year (rho=-0.20 and -0.18, p=0.01 and 0.02, respectively). Osteoprotegerin (OPG), higher in BM of women with UC (p=0.018), was positively correlated with Streptococcus (MaAsLin2 FDR p=0.2) and negatively correlated with Bacteroides and Parabacteroides (MaAsLin2 FDR p=0.03 and 0.1) in the offspring at month 1. 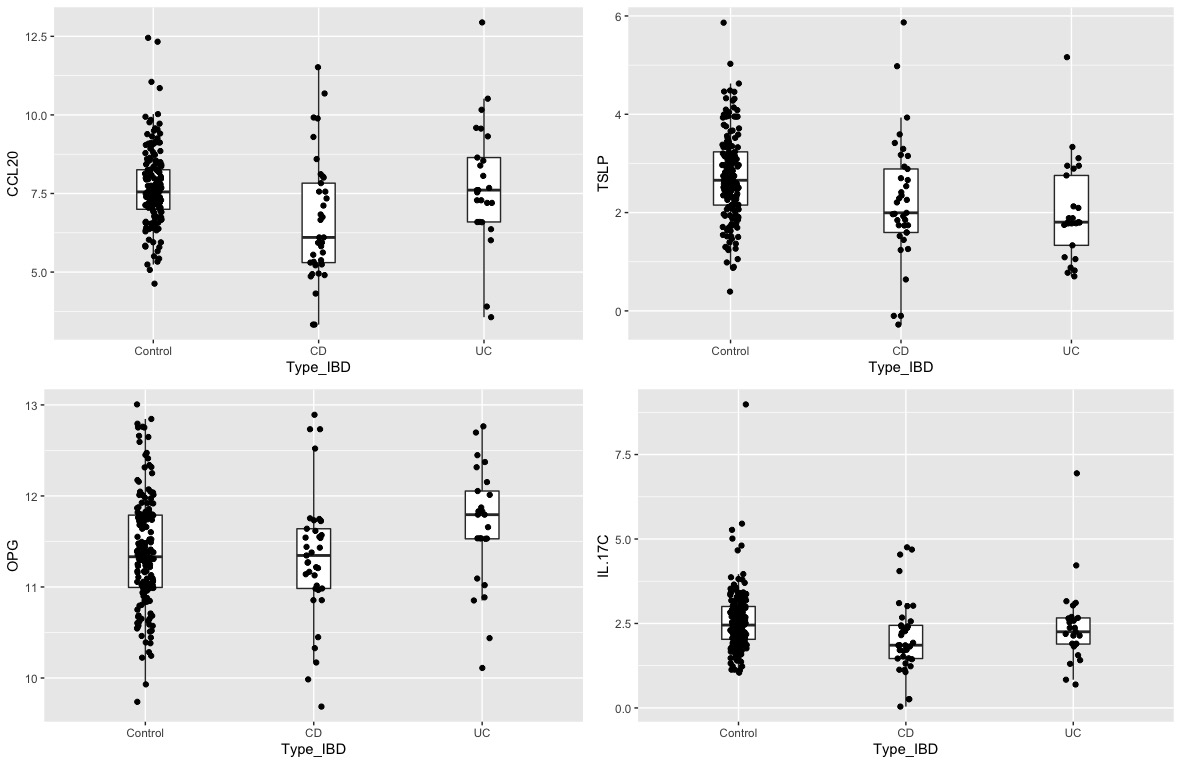