Four randomized controlled trials studying faecal microbiota transplantation (FMT) in active UC patients showed variable success rates. The efficacy of FMT appears to be influenced by various factors including donor- and procedure-specific characteristics. We hypothesized that the outcome of FMT in patients with active UC could be improved by donor preselection on microbiota level, by using a strict anaerobic approach, and by repeated FMT administration.

The RESTORE-UC trial (NCT03110289) was a national, multi-centric double-blind, sham-controlled randomized trial. Active UC patients (Total Mayo score 4-10 with endoscopic sub-score ≥2) were randomly allocated (1:1) to receive 4 anaerobic-prepared superdonor (S) FMT or autologous (A) FMT (Figure 1) by permutated blocks (2 and 4) and stratified for weight, concomitant steroid use, and therapy refractoriness.
S-FMTs were selected after a rigorous screening excluding samples with Bacteroides2 enterotype, high abundances of Fusobacterium, Escherichia coli and Veillonella and the lowest microbial loads (Q1).
A futility analysis after 66% (n=72) of inclusions was planned per protocol including a modified intention-to-treat (mITT) analysis using non-responder imputation (NRI) for patients receiving at least one FMT. The primary endpoint was steroid-free clinical remission (Total Mayo ≤ 2, with no sub-score >1) at week 8.

Between March 2017-2021, 72 patients signed the ICF and 66 were randomly allocated to S-FMT (n=30) or A-FMT (n=36) and received at least one FMT. In the S-FMT and the A-FMT resp. 4 and 5 patients terminated the trial early due to worsening of colitis (4 in both arms) or FMT enema intolerance (1 A-FMT). They were included in the mITT analysis using NRI (Fig. 2). Both study arms were matched for baseline characteristics (Table 1), yet a trend (p= 0.066) towards higher concomitant biological use in the S-FMT arm was observed.
After 66% of intended inclusions, the primary endpoint was reached in 3/30 (10%) S-FMT and 5/31 (13.9%) patients randomized to A-FMT (p=0.72).
As the predefined minimum difference between both treatment arms was not attained, the study was stopped due to futility. The full set of endpoints are summarized in Table 2.Of note, no patients on concomitant biologicals reached the primary endpoint.
There were 2 serious adverse events in the A-FMT arm: dysuria requiring hospitalization and worsening of UC requiring colectomy. 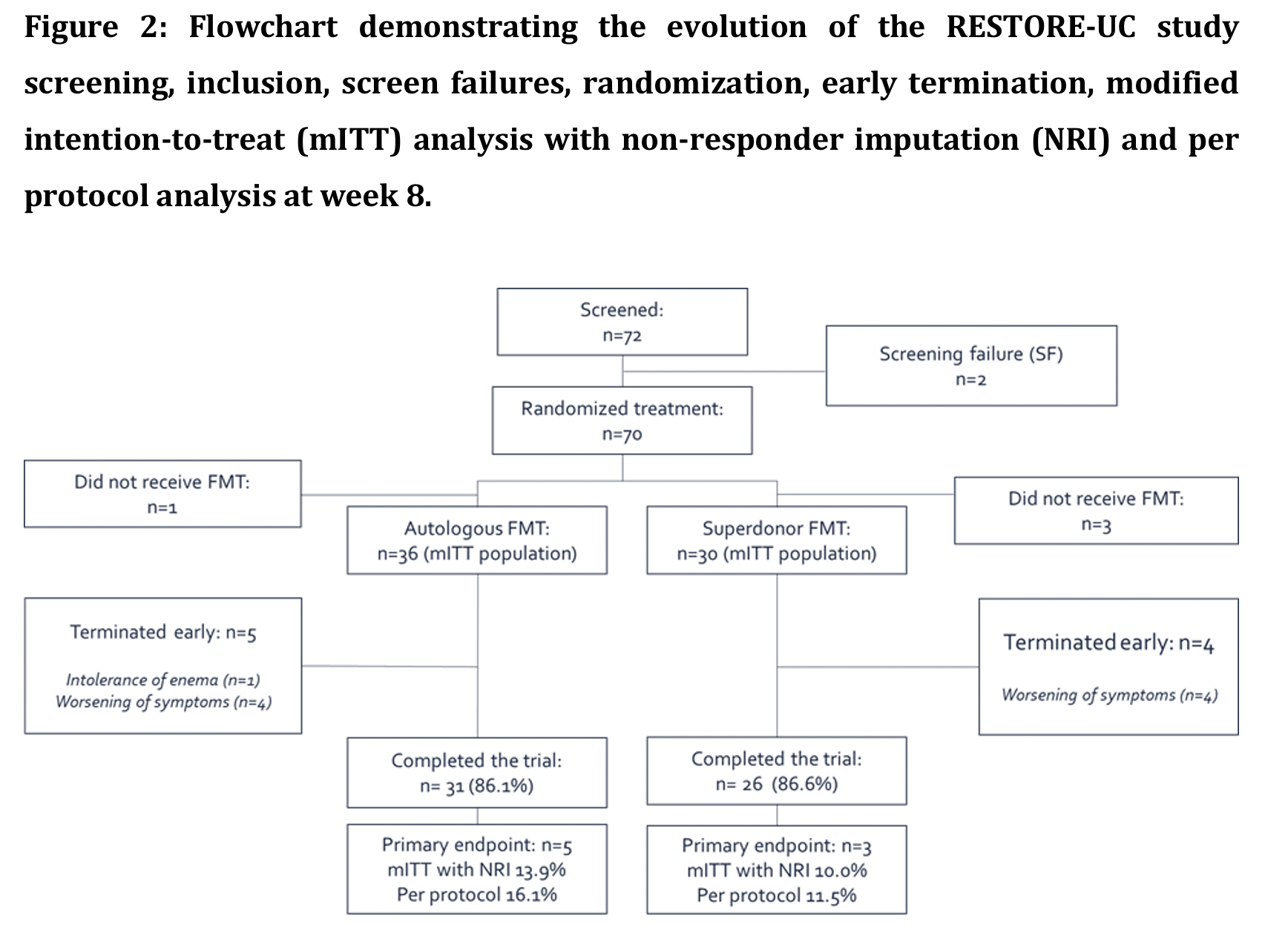 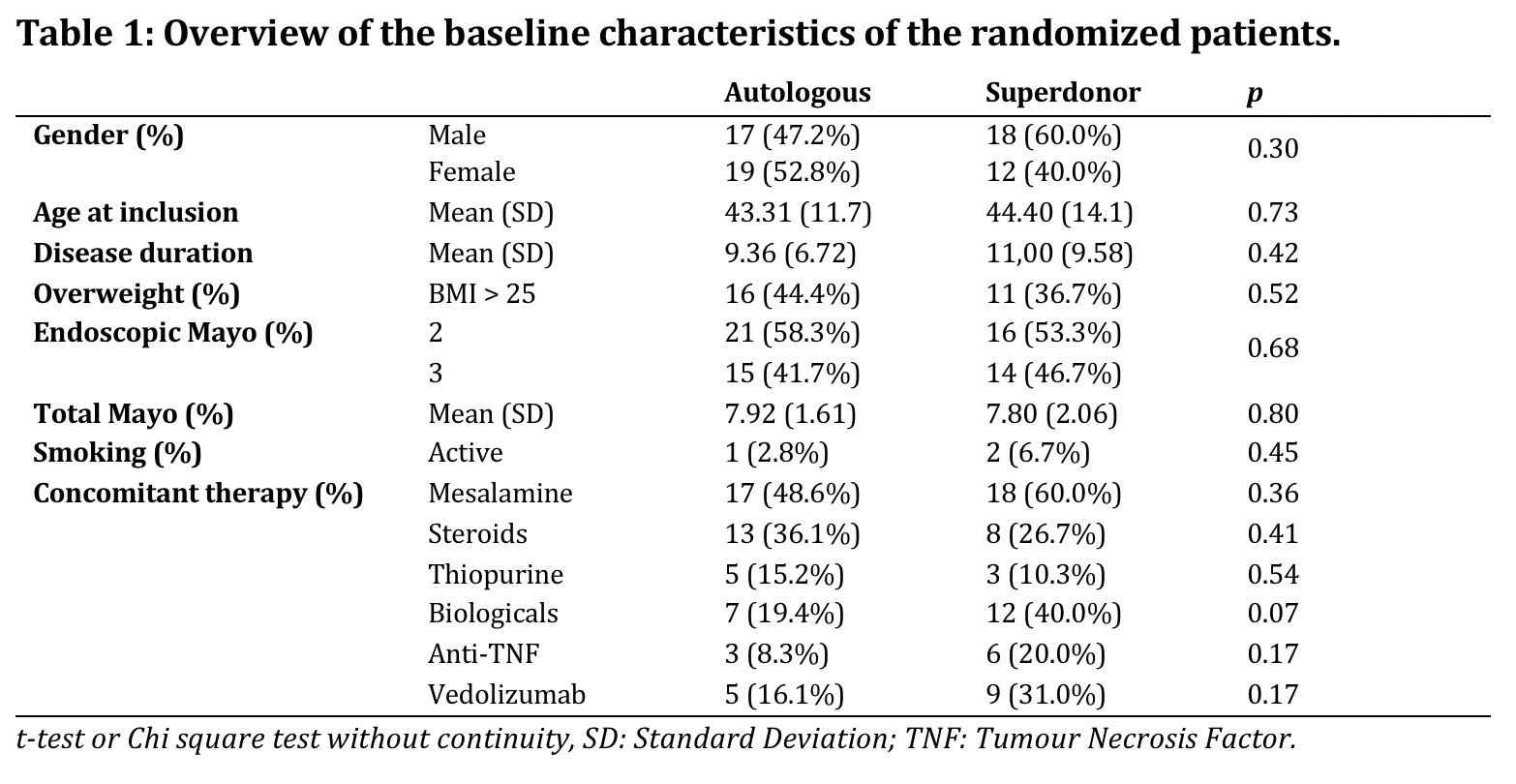 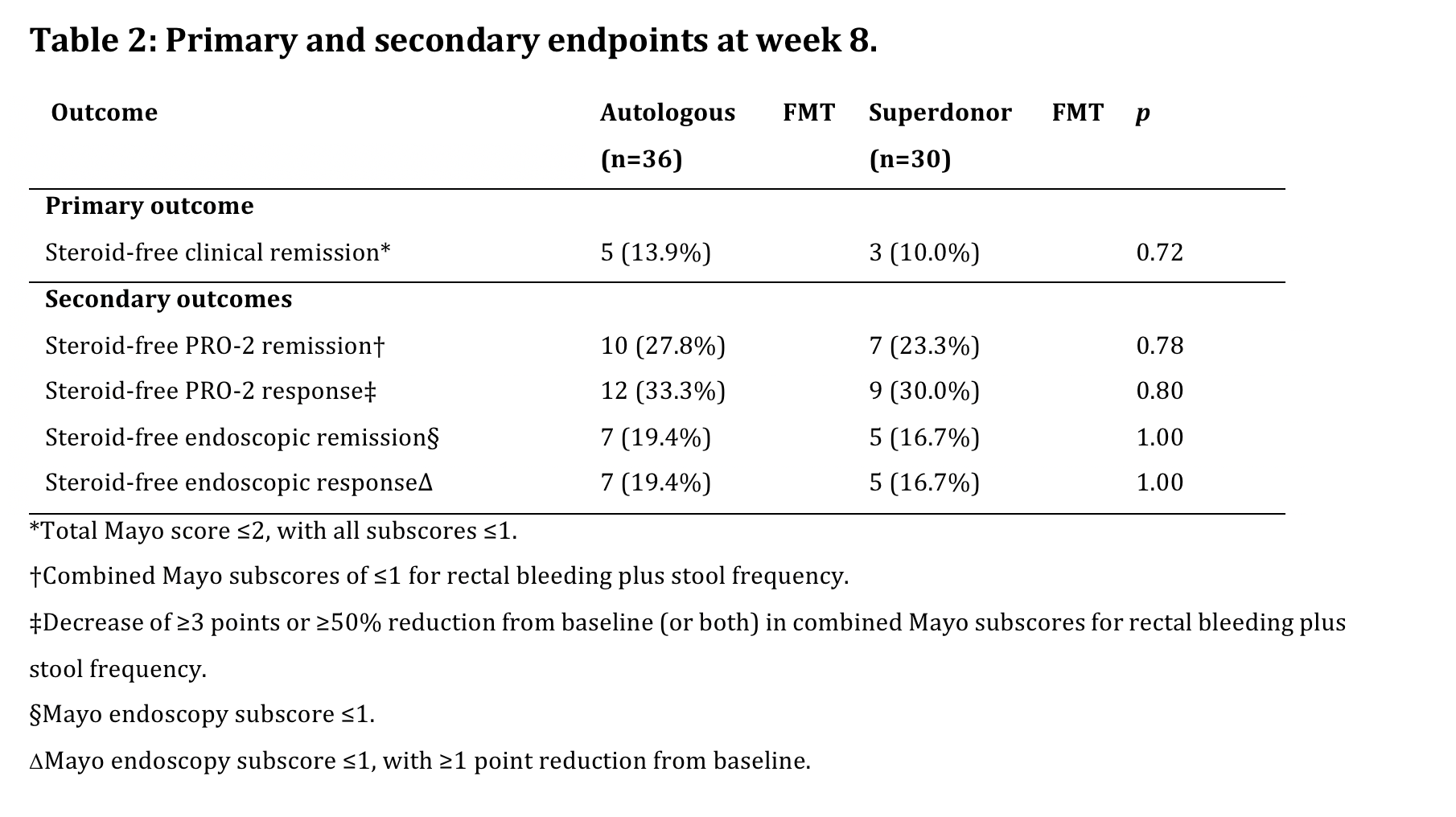 In this double-blind sham-controlled trial comparing repeated administrations of anaerobic-prepared S-FMT with A-FMT in patients with active UC, no significant difference in steroid-free remission rates at week 8 were observed. The FMT procedure was generally well tolerated, and no new safety signals were observed.