In this real-world-evidence (RWE) study we aimed to analyse the persistence of biologic therapy in biologic-naïve ulcerative colitis (UC) patients and to compare 1-year effectiveness of vedolizumab (VDZ) and anti-TNF.

Between 2017 and 2020, 1200 consecutively enrolled biologic-naïve and biologic- experienced patients with UC and Crohn´s disease (CD) were prospectively included in the VEDOIBD-Registry from 45 IBD-experienced centres across Germany. After exclusion of bio-experienced patients, CD and missing outcomes, the final sample consisted of 274 biologic-naïve UC-patients with 1-year follow-up data. Switchers of a drug were considered as treatment failure (modified intention-to-treat analysis; mITT) while switchers were excluded from per protocol analysis (PP). Clinical response modified (reduction of partial Mayo score (pMayo) from baseline to 1-year by >3 points or a reduction of at least 30% compared to baseline or reaching remission at 1-year) and (steroid-free) remission rates (pMayo ≤1 plus a bleeding subscore=0 (and no systemic use of steroids or budesonide at 1-year)) were predefined as outcomes. To reduce the effect of confounders, PS adjustment with inverse probability of treatment weighting (IPTW) was implemented. A weighted logistic regression was used, and the results were reported as odds ratio (OR) and 95% confidence interval (CI).

The 1-year maintenance findings suggested, in line with our previous induction phase data, only moderate long-term effectiveness in both groups. However, besides the significant response data, VDZ showed numerically higher remission rates compared to anti-TNF though only borderline significant. The higher treatment persistence of VDZ vs anti-TNF, along with the higher effectiveness, may suggest VDZ as a first-line biologic therapy option in UC patients. 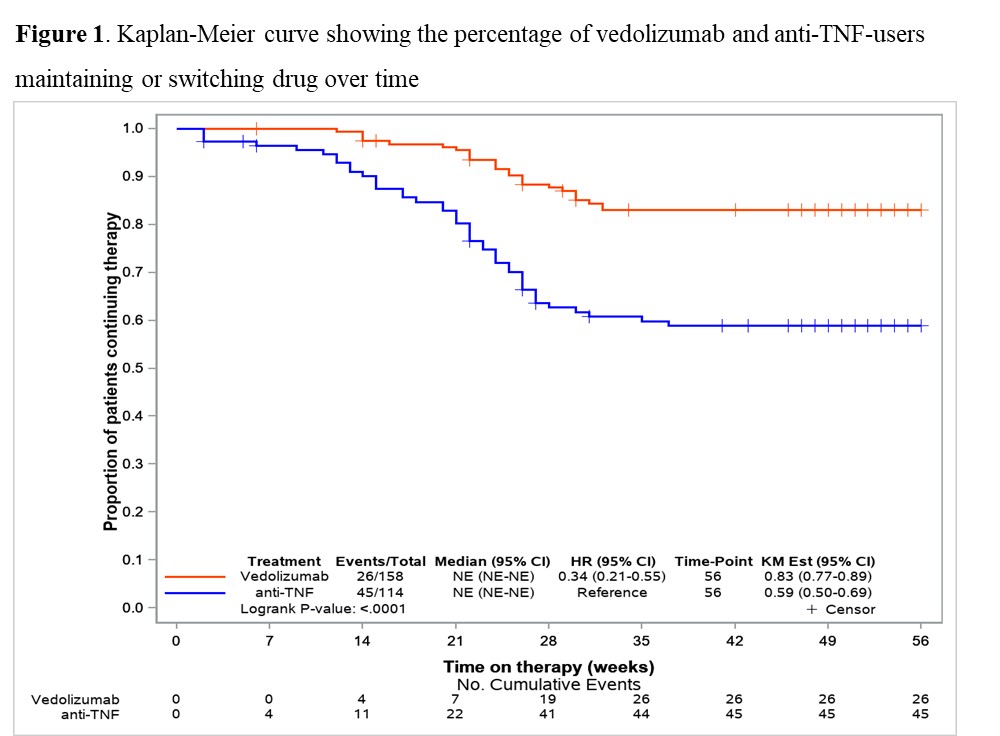