Scientific Session 10: Beyond the gut

OP36 Efficacy and safety of combination induction therapy with guselkumab and golimumab in participants with moderately-to-severely active Ulcerative Colitis: Results through week 12 of a phase 2a randomized, double-blind, active-controlled, parallel-grou

Preclinical data from a murine model of acute colitis suggest that dual blockade of interleukin(IL)-23 and TNFα more effectively prevented the development of colonic inflammation than each monotherapy. Guselkumab(GUS), an IL-23p19 subunit antagonist, is being studied in inflammatory bowel disease. Golimumab(GOL), a TNFα antagonist, is approved for ulcerative colitis(UC). The objective of this study was to evaluate the efficacy and safety of combination induction therapy with GUS+GOL vs GUS or GOL alone in adults with moderately-to-severely active UC.

214 patients(pts) naïve to TNFα antagonists and refractory or intolerant to conventional therapy(ie, immunomodulators and/or corticosteroids) were randomly assigned to receive GUS 200mg intravenous(IV) at weeks(wks) 0, 4, and 8(n=71); GOL 200mg subcutaneous(SC) at wk0 then 100mg SC at wks2, 6, and 10(n=72); or combination with GUS 200mg IV+GOL 200mg SC at wk0, GOL 100mg SC at wks2, 6, and 10, and GUS 200mg IV at wks4 and 8(n=71). The primary endpoint was clinical response at wk12; the major secondary endpoint was clinical remission at wk12. Other key endpoints were clinical remission based on the modified Mayo score (mMayo), symptomatic remission, endoscopic improvement, endoscopic normalization, histologic remission, composite histologic-endoscopic endpoints, and biomarker outcomes.

Baseline disease characteristics were similar among groups(Table 1), however a greater proportion of pts in both monotherapy groups had pancolitis vs the combination group. A greater proportion of pts who received combination therapy achieved clinical response at wk12(83.1%) vs GUS(74.6%) or GOL(61.1%)(Table 2). Similarly, the proportion of pts who achieved clinical remission in the combination group(36.6%) was greater than that of monotherapy groups(21.1% and 22.2%, respectively). Clinical remission by mMayo score, endoscopic improvement, histologic remission, both histologic remission and endoscopic improvement, and biomarker normalization (calprotectin, CRP) rates at wk12 were also greater in the combination group vs GUS or GOL. Percentages of pts with endoscopic normalization and both histologic remission and endoscopic normalization were nearly double with combination therapy vs either monotherapy. Adverse event(AE), serious AE, and infection rates were comparable among treatment groups. One pt receiving combination therapy experienced a serious infection of influenza and sepsis. No deaths, malignancies, or TB cases were reported through wk12. 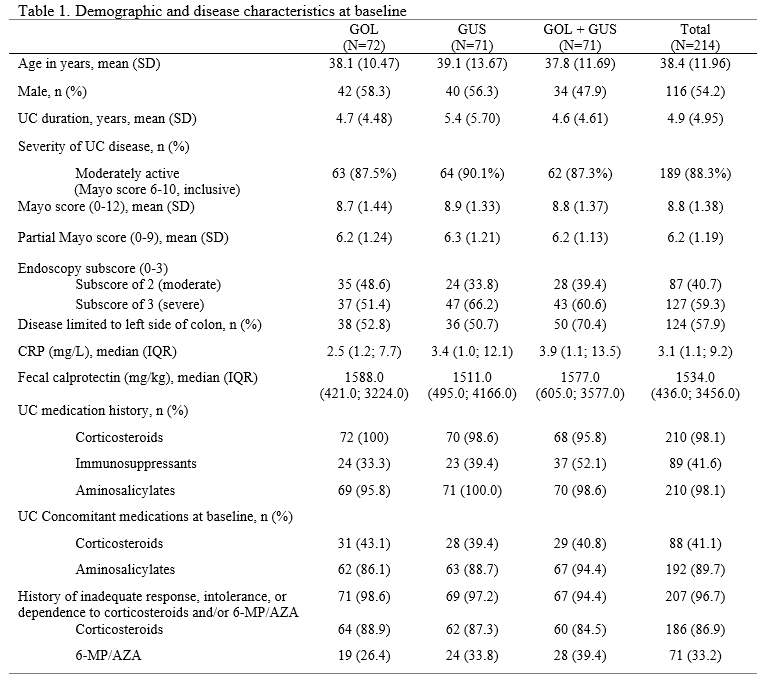 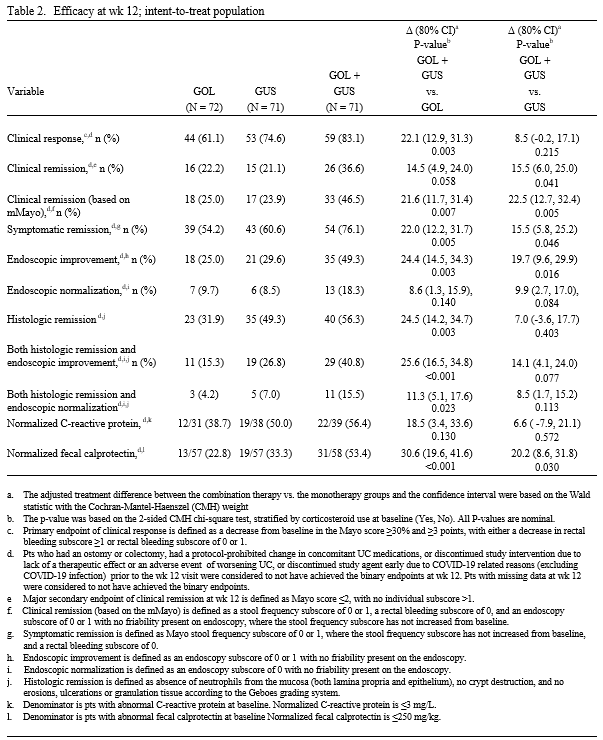