Crohn’s disease (CD) is characterized by persistent inflammation and ulcerations at the small or large bowel, provoking chronic low-grade systemic inflammation. Adipose tissue (AT) is believed to play an active role in the pathogenesis of CD, as the expansion of mesenteric fat attached to the inflamed segments of the intestine, also known as “creeping fat,” is a hallmark of the disease that seems to be directly related to disease activity. We demonstrated that adipose-stem cells (ASC) isolated from the creeping fat of CD patients showed a proinflammatory phenotype and increased the proliferation, migration, and phagocytic capacities of these cells. Taking into account the widely described effects of TNFalpha on the biology and functionality of adipocytes, we believe that biological therapies based on anti-TNF agents modify the inflammatory status of creeping fat. In this context, the effect of anti-TNF treatment on mesenteric fat is poorly studied, and the results are divergent.

Creeping fat biopsies were obtained from active CD patients that underwent surgery for symptomatic complications: 10 patients were on anti-TNF therapy (at least 6-months prior to surgery) and 10 patients never received any biological therapy. The groups were comparable in age, sex, and body mass index. We isolated from AT biopsies: AT explants, ASC, and adipose tissue macrophages (ATM). Adipose tissue was fixed in 10% phosphate-buffered formalin and embedded in paraffin for histological studies. The proliferation of ASC was performed using the CellTraceTM Violet Cell proliferation kit using flow cytometry and the cell migration of ASC was analyzed using a Tranwell system (8 mmpore polycarbonate membrane). 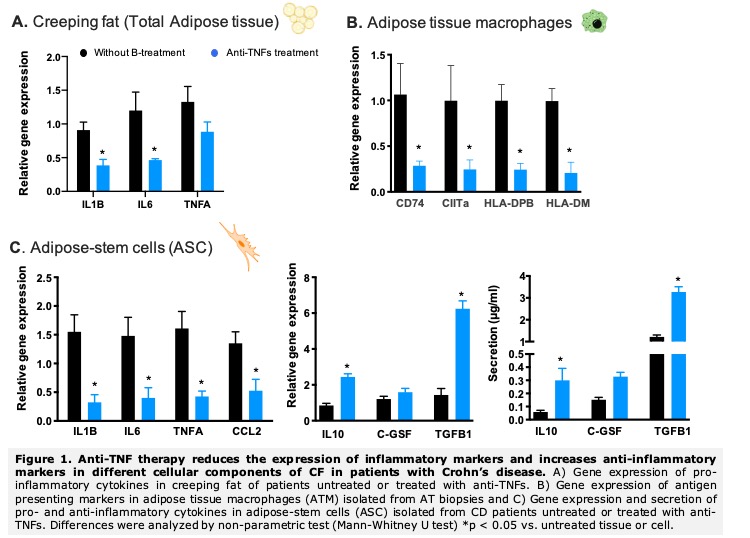 Anti-TNF therapies impact on the creeping fat of CD patients improving the phenotype of this tissue and this may cause a beneficial effect on CD.