Determining the best treatment path for Crohn’s Disease (CD) patients following loss of response (LoR) to a tumour necrosis factor inhibitor (TNFi) is challenging for clinicians. This study seeks to provide real-world evidence on treatment failure, treatment discontinuation and corticosteroid-free drug survival in CD patients with LoR to a first TNFi, switching to another TNFi compared to a non-TNFi biologic.

Adult CD-patients without biologics therapy in the last 6 months who started treatment with adalimumab or infliximab and switched due to LoR to another biologic between 01/10/2014-31/12/2018 were identified from German claims data (AOK PLUS). The identified patients were classified as either within-class switchers (WCS) (if they switched to adalimumab or infliximab) or outside-class switchers (OCS) (if they switched to vedolizumab or ustekinumab). The date of first treatment switch was set as the index date. Patients were followed for at least one year after treatment switch. To compare WCS and OCS, baseline covariate adjustment through inverse probability of treatment weighting (IPTW) of the propensity scores was conducted. Time-to-event analyses were performed using Cox Proportional Hazard regressions adjusted for an indicator of primary non-response and secondary LoR (if the first switch happened within or after 6 months from the initial TNFi).

112 patients (53 WCS and 59 OCS) were identified. Upon IPTW, 43 WCS and 54 OCS satisfying the common support assumption were included for comparative analyses with adjustment for primary non-response and secondary LoR.  WCS were significantly more likely to receive corticosteroid therapy, more likely to fail and to discontinue the treatment they had switched to; and more likely to switch again to another biologic compared to OCS (Figure 1). Having switched due to primary non-response or due to secondary LoR was not significantly associated with any outcome. 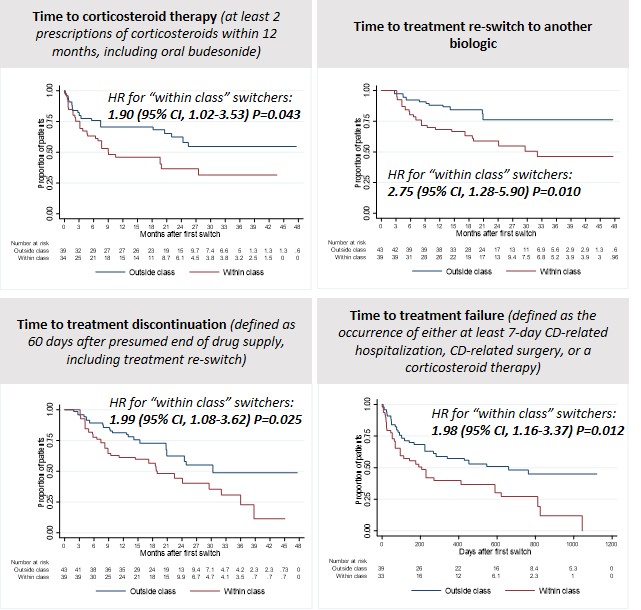 Whilst small sample size is a limitation, these results suggest that following loss of response to a TNFi, patients may benefit from switching to vedolizumab or ustekinumab rather than switching to a different TNFi.