The IBD Disability Index (IBD-DI) is a validated health care professional (HCP) administered tool that can assess the functional status of patients in trials. The IBD-Disk was adapted from the IBD-DI as a tool that patients can use to capture their functional status for HCPs to review. We report patient acceptability and use of the IBD-disk in the real-world setting.

The IBD-Disk was constructed by an expert steering committee of international gastroenterologists/nurses who ranked the IBD-DI items. A modified Delphi process was used to agree on 10 IBD-Disk items. It was administered in outpatient clinics to patients across NHS hospitals. Inclusion criteria comprised patients aged 18 and over, of all ethnicities, with a confirmed diagnosis of IBD. Exclusion criteria were lack of fluency in English, not agreeable to take part or participation was deemed inappropriate. Patients were asked to rate their level of agreement for each item on the IBD Disk on a visual analogue scale of 0–10 (0 = absolutely NO, 10 = definitely YES). We included a difficulty rating of 1–10 to assess ease of completion of the questionnaire (1 = very easy; 10 = very difficult) as well as qualitative feedback.

A total of 377 patients agreed to take part. The mean age of the cohort was 42 years. Two hundred and twenty-one were female (59 %). 287 were White. One hundred and ninety-nine patients had CD, 159 UC, the remaining unknown. Of the domains of the IBD Disk (see Figure), energy levels, sleep and joint pain scored highest (most impairing) with mean values of 5.68, 4.85 and 4.68, respectively, whereas interpersonal interactions and sexual functions were least affected, mean scores 2.51 and 2.81. The mean difficulty rating was 2.3 (SD = 2.29). Correlations were performed between abdominal pain and energy levels/sleep { = 0.6 and = 0.56)} and between joint pain and energy levels/sleep { = 0.57 and = 0.58). Clinicians highlighted that the IBD-disk opened up conversations beyond GI issues and gave a good overview of well-being. It facilitated discussion on sexual function and body image. Patients’ feedback highlighted that they were glad they were able to express their functional status and its severity. 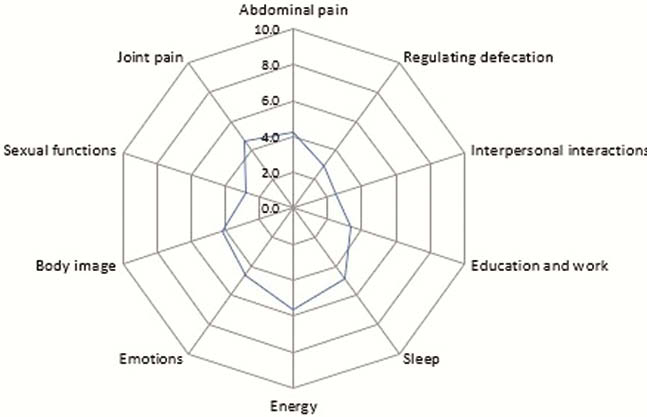 Energy levels, sleep and joint pain were the most disabling for this unselected IBD cohort. This may help to focus the discussion in the clinic setting. Our experience with the IBD-Disk proved very positive with high patient acceptability.