P136 Faecal calprotectin as therapeutic target in patients with Crohn’s disease treated with anti-TNF: a meta-analysis of individual data

Faecal calprotectin (Fcal) could be a non-invasive alternative to endoscopy to assess therapeutic efficacy in patients with Crohn’s disease (CD). We performed a systematic review and meta-analysis of individual data to assess the performances of FCal after anti-TNF induction therapy to predict mid-term steroids-free clinical remission (CFREM) in CD.

We included all the studies reporting patients with CD receiving anti-TNF agents with Fcal measurement before and after induction therapy (from 8 to 14 weeks) with follow-up > 6 months, no therapeutic intervention based on FCal during the follow-up and mid-term clinical evaluation between week 32 and week 54. CFREM was defined as CDAI < 150 and continuation of the same anti-TNF agent without steroids. 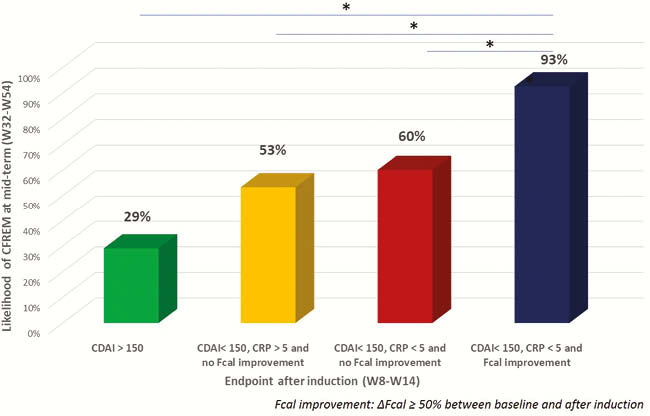 The improvement of Fcal after anti-TNF induction therapy is predictive of mid-term CFREM in patients with IBD. The combination of clinical remission, CRP normalisation and FCal improvement should be a therapeutic target in patients with CD. Our work highlighted the need of international standardisation of Fcal measurement.