We conducted a web-based, multicentre, discrete choice experiment among adult IBD patients with an indication for surveillance, treated in two academic and one general teaching hospital in The Netherlands. Individuals were repeatedly asked to choose between three hypothetical surveillance scenarios and indicate if they would prefer this option in real-life. The choice tasks were based on bowel preparation (0.3-4L), CRC risk reduction (8% to 1-6%), and interval (1-10 years). Attribute importance scores, trade-offs, and willingness to participate were calculated using a multinomial logit model. Latent class analysis was used to identify subgroups with similar preferences.

In total, 301 of 386 questionnaires sent out were completed and included in the study. The attributes and levels in the choice tasks significantly affected patients’ preferences. Bowel preparation was the most valued attribute (importance score 40.0%), followed by surveillance interval and CRC risk reduction (respectively 30.9% and 29.0%). Maximal CRC risk reduction, low-volume bowel preparation (0.3L laxative with 2L clear liquid) with two-yearly surveillance was the most preferred combination. Patients were willing to exchange a surveillance interval from three-yearly to annually for a CRC risk reduction of 2.9%. In latent class analysis, three subgroups were identified (figure 1). Willingness to participate in CRC surveillance was high, with only five patients (1.7%) always choosing ‘no surveillance’. Perceived high burden of bowel preparation and lower age were significantly associated with the ‘laxative avoidant’ group compared to the reference group ‘surveillance preferent’ (univariable odds ratio (OR) 2.92, 95% CI (confidence interval) 1.63-5.23 and OR 0.96, 95% CI 0.94-0.98, respectively). High level of education and age significantly differed in the ‘CRC risk avoidant’ group (univariable OR 3.77, 95% CI 2.11-6.75 and 0.94, 95% CI 0.92-0.96). 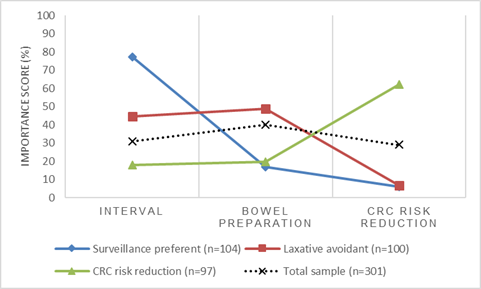 Bowel preparation is seen as the most important factor by patients in CRC surveillance in IBD. Heterogeneity in preferences can be explained by three latent subgroups. Surveillance adherence could benefit from these findings.