P163 Changes in diagnostic delay in inflammatory bowel diseases over the years: a retrospective single-centre analysis

Delayed diagnosis is common in inflammatory bowel diseases (IBD) and has been reported to be longer for patients with Crohn’s disease (CD) than for those with ulcerative colitis (UC). Aims of study were to assess the median time to diagnosis in IBD patients, to examine whether diagnostic delay (DD) has improved over the years and its impact on biological treatment and need for surgery.

A retrospective monocentric study including IBD patients living in the area of Verona (Italy), diagnosed up to 2019 and followed-up for at least 6 months at IRCCS Sacro Cuore—Don Calabria, Negrar, was carried out. DD was defined as the period (months) from symptoms onset to histological diagnosis of IBD and reported as <6 months, 6–12 months and >12 months. 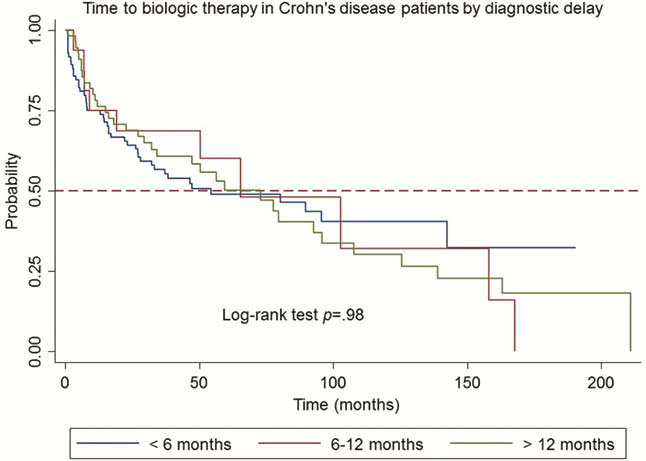 In our cohort, DD has significantly decreased over the last years, more for UC than CD patients. This is probably related to the increased awareness of patients on disease and of general practitioners in sending them to the specialist. Considering the published literature, UC and CD did not differ in DD; moreover age at diagnosis did not affect DD in our patients. DD did not influence the need for biological treatment or surgery rates in both diseases. These results are probably related to the difference in disease extension and severity among the patients enrolled. An analysis on targeted patients at higher risk for bowel damage is presently under way.