Inflammatory bowel disease (IBD) increases the risk of colorectal cancer proportionally to the extent and duration of the disease. Moreover, up to 5% of IBD patients have concomitant PSC, an additional risk factor, especially for right colon cancer. To mitigate this risk patients with PSC-IBD undergo stricter annual surveillance colonoscopy. We aimed to analyze differences in incidence, location and type of lesions detected during surveillance colonoscopies in PSC/IBD and only IBD. In addition, we assessed the impact of dye spray chromoendoscopy on detection rates.

In a retrospective single-center study, we collected all surveillance colonoscopies performed at Birmingham University Hospital between January 2014 and August 2019. The procedures were divided for patient diagnosis in PSC-IBD or IBD-only. Demographic, clinical, endoscopic and histologic data were retrieved from electronic medical records. Categorical variables are presented as absolute and relative frequencies and compared using chi-square test and Fisher’s exact test. Continuous variables are presented as mean and compared by Student t-test after testing for normality.

We retrieved 856 colonoscopies from 622 patients, of these 282 colonoscopies were performed in 147 patients with PSC, the remaining 574 in 475 patients with IBD-only. Demographic data are presented in (Table 1).
In 64 (22%) colonoscopies in PSC/IBD and 173 (30%) in PSC/IBD at least one lesion was found (p=0.02). The total number of lesions was 70 for PSC/IBD (0.248 lesions per procedure) and 226 for IBD-only (0.394 per procedure) (p=0.02). While these differences were statistically significant, PSC/IBD patients had 58% (1.2 vs 1.9) more colonoscopies, due to the stricter surveillance regimen, thus likely reducing the rate of lesions per procedure (Table 2 and 3).
There was no statistically significant difference in histologic type and localization of lesions between the two groups (Table 3).
Dye spray chromoendoscopy (DCE) was used in 52% of procedures in the IBD-only group, and 65% of the PSC-IBD. Colonoscopies with DCE were significantly more likely to detect lesions both in PSC-IBD and IBD-only cohorts (both p<0.05). Table 4. 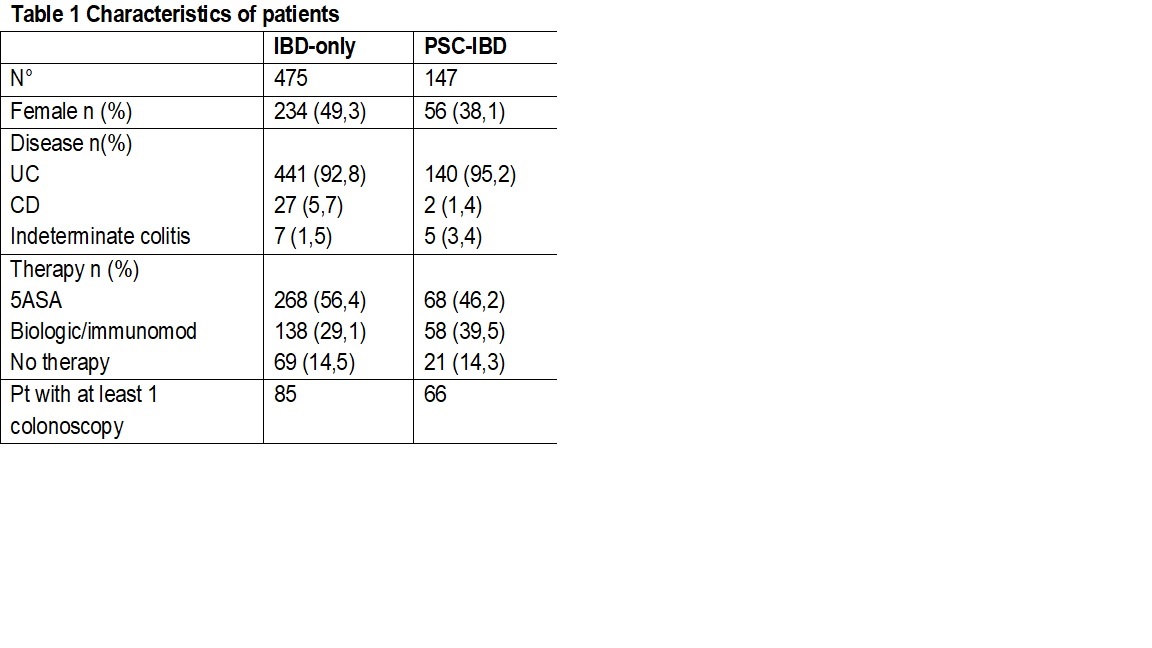 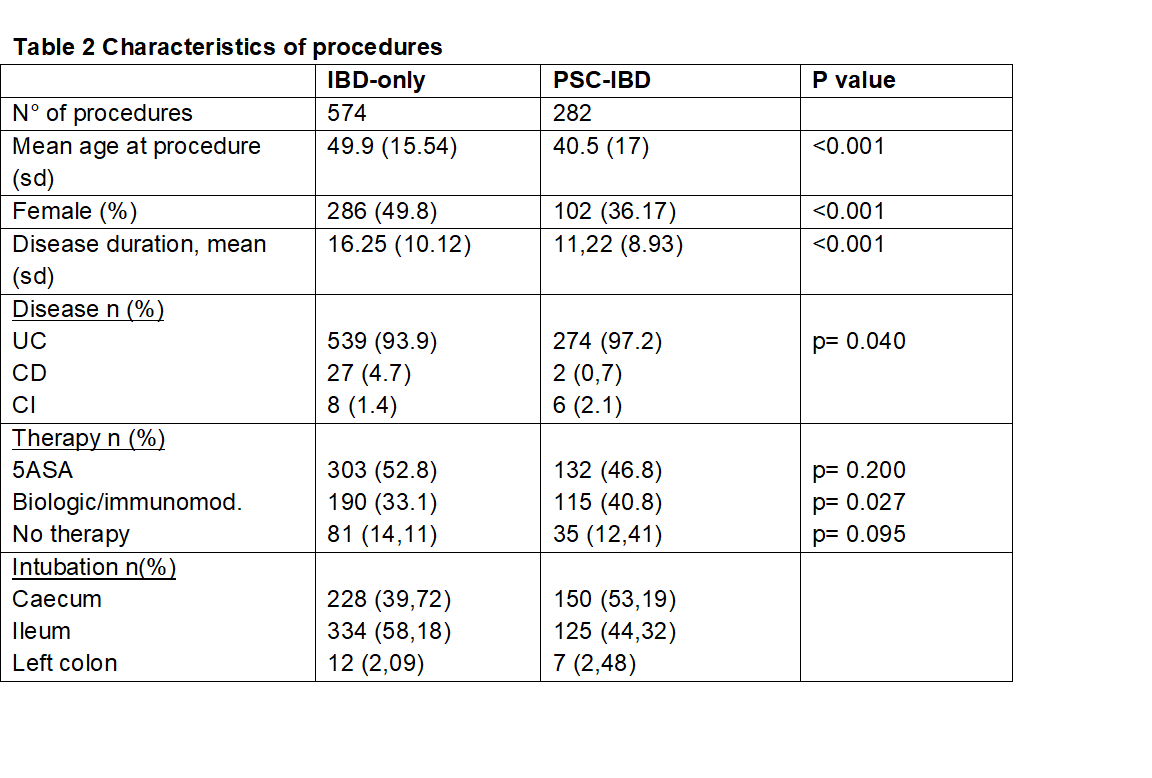 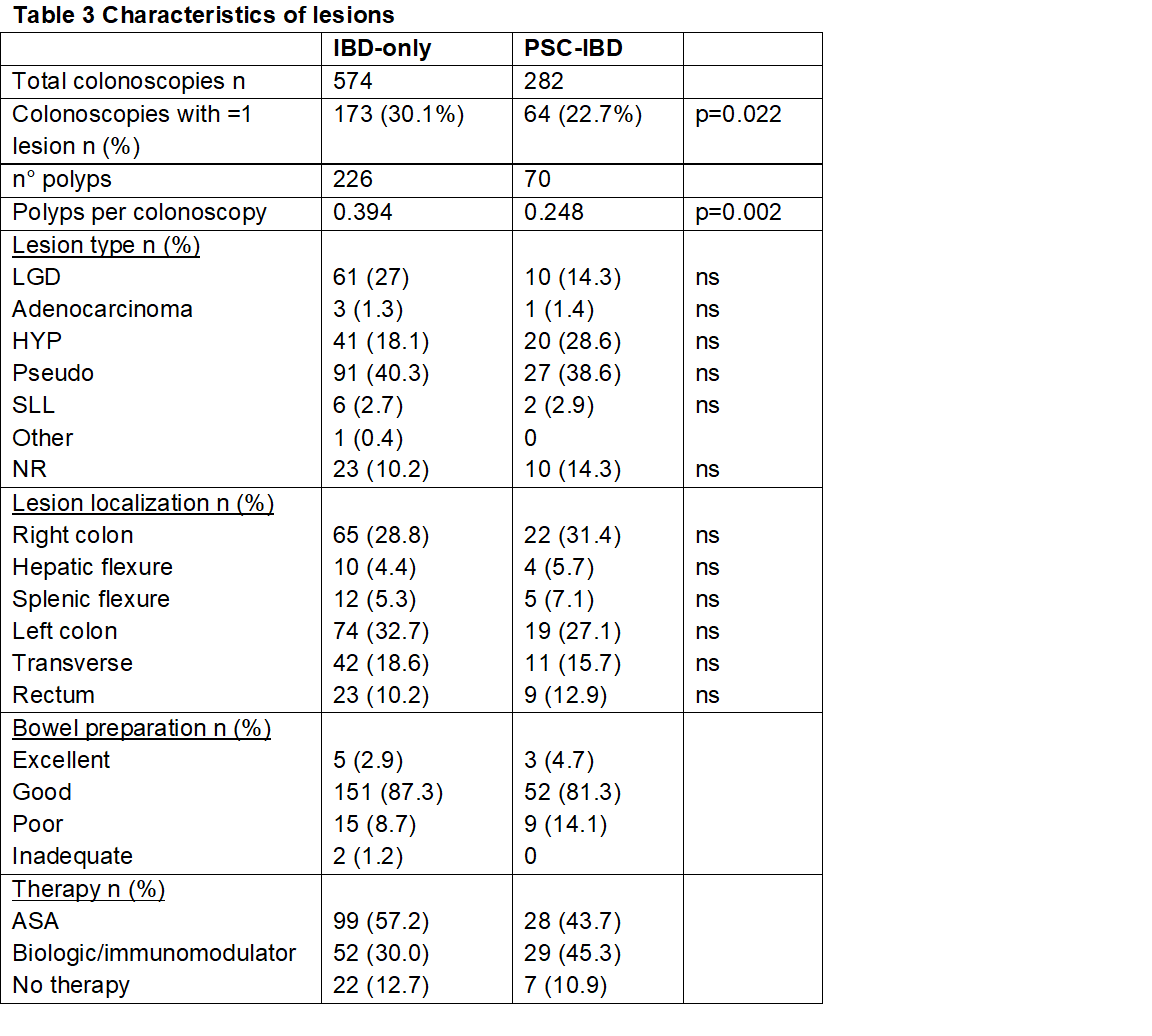 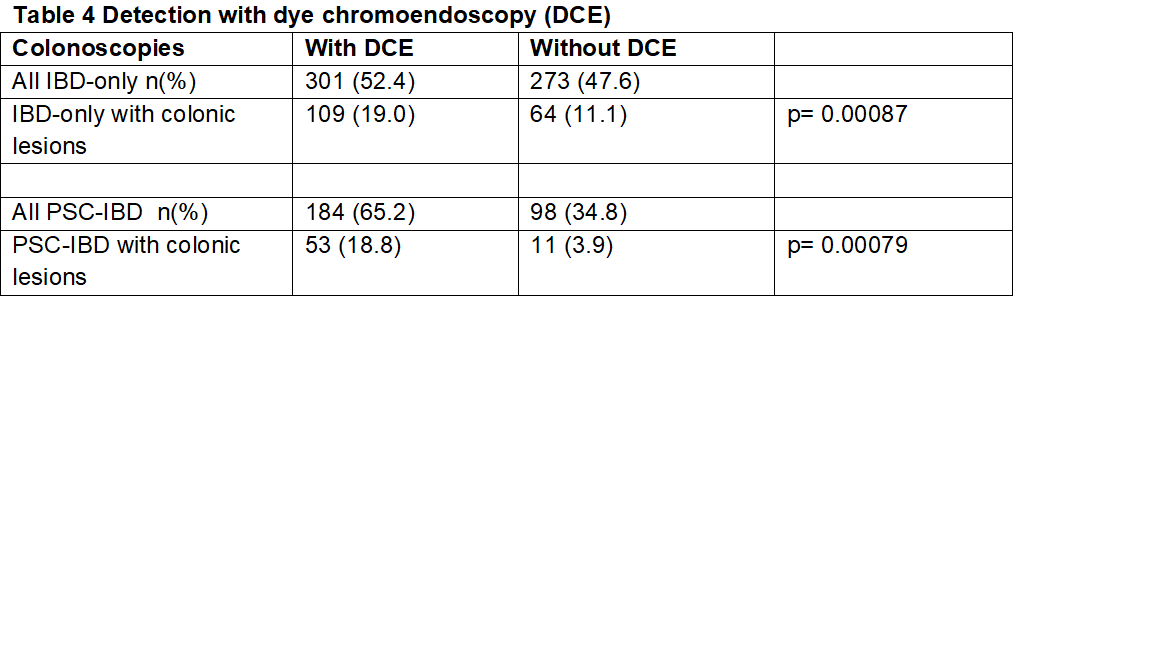 We found a higher detection rate of colonic lesions in colonoscopies of the general IBD population compared to those PSC-IBD patients, though this might be influenced by the frequency of surveillance. The location and type of polyps were similar between groups. DCE increased the rate of detection compared with no DCE regardless of disease phenotype.