In the treat-to-target era, frequent and objective monitoring of disease activity in IBD patients is emphasized [1]. Over the past years, intestinal ultrasound (IUS) has become a useful modality to monitor and assess disease activity and response to therapy. (Trans)mural response and healing examined by IUS have emerged as outcome measures of growing interest and potential therapeutic goals in the IBD community [2-4]. However, the predictive value of a composite clinical/IUS improvement for the long-term outcome remains elusive.

TRUST BEYOND is an ongoing, prospective, observational, multi-centre study in patients with active CD or UC initiating a biologic- or Januskinase-inhibitor (JAKi)-therapy at baseline. The aim of this study is to assess the predictive value of IUS parameters evaluated at week 12 for the long-term outcome after 52 weeks (assessed by clinical+ sonographic endpoints). For this interim analysis, 89 IBD patients (39 CD, 50 UC) with a documented visit at week 52 until September were included. The predictive value of (trans)mural response (TR; reduction of ≥ 25% in bowel wall thickness, BWT) and clinical remission at W12 was evaluated for the outcome at W52. 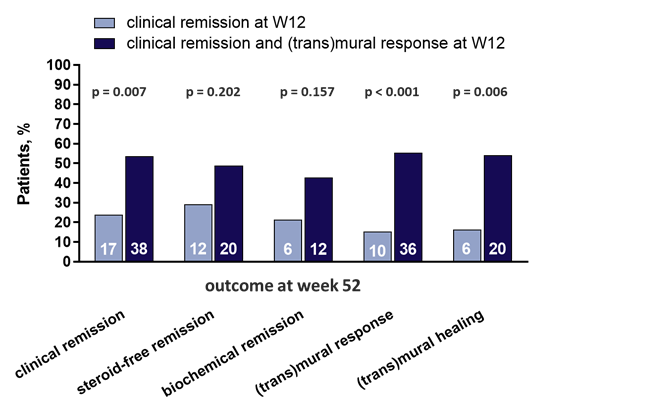