In clinical practice, patients with IBD have their biologic therapies withdrawn due to variety of reasons. The aim of the study was to report on predictors of prognosis in IBD patients after biologics have been discontinued, with a minimum follow-up of 24 months.

All IBD patients who discontinued their first-use biologic were identified between January 2013 and Dec 2016 from EMR at a tertiary referral centre, to ensure at least 24 months follow-up. Reasons for discontinuation and pre-defined adverse outcomes (steroid and other rescue therapies, hospitalisations, surgery including perianal) were recorded. The data were analysed using multivariable and univariable logistic regressions within a machine learning technique in order to predict adverse outcomes, within the stated timeframe. We tested the significance of the identified predictors and performed Kaplan–Meier survival analysis to compare patients with elective vs. non-elective discontinuation of biologics. 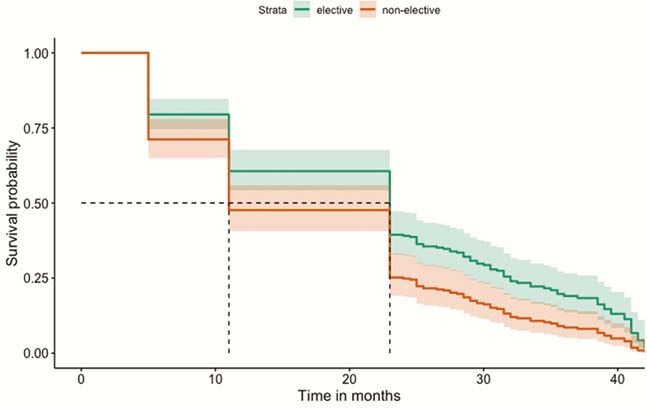 Using data from all 147 patients, multivariable logistic regression analysis was done to identify significant predictors of prognosis. These are represented in Table 1.

Overall, a significant number of patients ( 80, 54%) had AO within 6 months of discontinuation, and 96 (65%) patients needed biologics to be restarted by the end of the study follow-up period.

Among IBD patients who discontinued biologics, there were fewer AO when they were electively discontinued. However, majority of patients required restart of biologics to manage their disease during the follow-up period. Clinicians need to be cautious when considering biologic discontinuation given the high proportion of AO and re-escalation to biologics therapy.