P229 Capsule endoscopy is useful in the diagnosis and monitoring of postoperative recurrence in Crohn’s disease. Analysis from an 11-year cohort.

Small bowel capsule endoscopy (SBCE) has been proposed as a non-invasive method to detect endoscopic postoperative recurrence (POR). To date, few studies with small-sized cohorts have evaluated the role of SBCE in monitoring patients with CD in the postoperative setting, targeting the early POR (≤ 12 months). Our aim was to conduct a retrospective analysis of the performance of SBCE in assessing POR comparing three different situations encountered in clinical practice: detecting early POR, monitoring for late POR (≥ 12 months) and assessing response to treatment in patients with previous endoscopic-POR.

We included all patients with known CD with previous ileocolonic resection followed in the Inflammatory Bowel Disease Unit of Hospital Universitario de Navarra from 01/01/2008 to 31/12/2019 in which a SBCE was performed. Patients were divided in three groups (early POR, late POR and monitoring POR)

A total of 113 SBCE procedures were included after excluding 18 cases (13.7%) due to a negative SB patency test. Patients were divided in early-POR group (n= 34), late-POR group (n=44) and monitoring-POR group (n=35). A total of 105 procedures (92.9%) were complete and 97 SBCE (85.5%) were considered conclusive since they allowed a correct assessment of the neoterminal ileum.

Disease activity in the neoterminal ileum according to the Rutgeert’s score is shown in figure 1. SBCE assessment was feasible for early (85%) and late (89%) detection of POR but with significant differences in the results. While in the Early-POR most patients (85%) had disease activity in the neoterminal ileum, only 64% of patients assessing late-POR had mucosal lesions (p= 0.03). There was relevant POR (Rutgeert’s ≥i2) in 58.8% of the early-POR group compared to 27.3% in the late POR (p=0.02).

For patients with previous POR, assessment with SBCE is also feasible with conclusive results in 83% of the patients. The predominant score was i2 with 26% of the group with similar proportions in the remaining scores (figure 1). Within the Monitoring-POR group, for those with previously assessed POR by endoscopy (either ileocolonoscopy or SBCE), the Rutgeerts Score improved in 43.5% of patients, worsened in 26% and remained unchanged in 30.5%. Overall, 45.7% of patients had relevant POR with 60% classified as i2.

No adverse events occurred in our cohort. 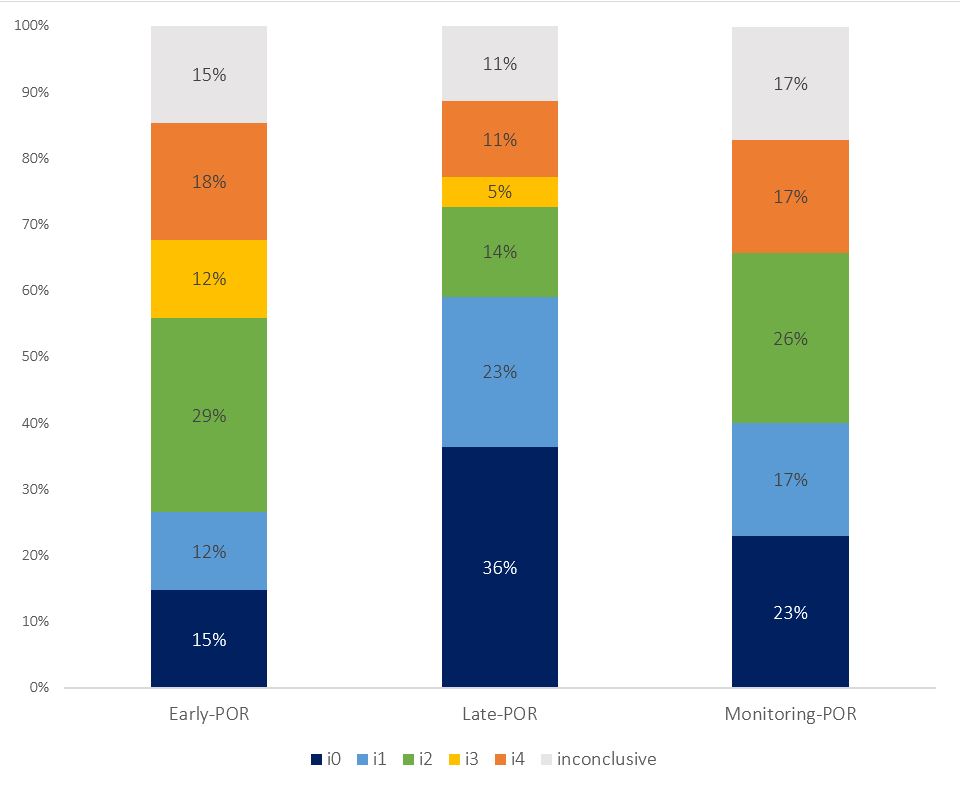