Calprotectin is a small calcium-binding protein that when measured in human stool has shown utility in assessing the degree of bowel inflammation in inflammatory bowel disease (IBD) and in distinguishing IBD from irritable bowel syndrome (IBS).  However, most fecal calprotectin (FCP) assays are slow and inconvenient. This study examined the analytical agreement and clinical utility of a point of care (POC) assay for FCP.

Clinical performance of the assay was assessed using stored frozen stool specimens from a nested cohort derived from a prospective study of chronic diarrhea patients.  Chronic diarrhea was defined as unexplained diarrhea of at least 4 weeks duration.  Study subjects were males and females of ages 2 – 70 with no chronic liver disease and were consecutively enrolled.  Diagnoses were made by attending physicians, and IBD patients did not necessarily have active disease beyond diarrhea at the time of specimen collection. Primary endpoint: Proportion of patients diagnosed with either IBS or IBD testing positive for FCP.

Statistical analysis:  Method comparison analysis was performed by Deming linear regression. A post hoc analysis of patients from the diarrhea study diagnosed with either IBS or IBD was performed. The significance of the proportion of patients diagnosed with either IBS or IBD testing positive for FCP was calculated using Fisher’s Exact Probability Test.  The assay was assessed at cut-offs of 50 µg/g and 120 µg/g. 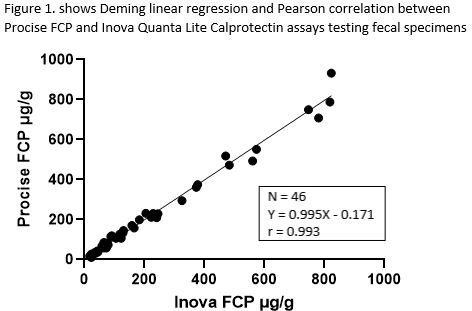 The Procise FCP assay shows excellent analytical agreement to another commercial FCP assay and can clinically significantly distinguish between IBD and IBS in chronic diarrhea patients. Thus, the assay can aid in the differentiation of IBD from IBS. Distinguishing IBS from IBD with a convenient POC format test enhances the clinical utility of FCP by enabling faster treatment response