Anaemia is one of the most common extraintestinal manifestations in patients with inflammatory bowel disease(IBD) at diagnosis. Studies have shown that anaemia was associated with low levels of quality of life, which improves with the correction of anaemia in adults. Recent data have shown an increase in the incidence and severity of paediatric IBD. We aim to investigate the trends in the prevalence of anaemia in children at diagnosis of IBD in the last decade. The secondary aim was to investigate the associations between haemoglobin (Hb) levels and disease characteristics.

Eligible patients (age ≤18 years, diagnosed with IBD from 2009 to 2018) were retrospectively identified through a prospective IBD database maintained at CHU Sainte-Justine, Montreal, Canada. Disease localisation and phenotype were defined according to the Paris Classification of IBD. Anaemia was defined by Hb levels according to WHO targets. The annual prevalence of anaemia was calculated according to subtype (inflammatory vs. iron deficiency). The Pediatric Crohn’s Disease Activity Index(PCDAI) and the Pediatric ulcerative colitis Activity(PUCAI) Index were used to assess the disease severity at diagnosis. 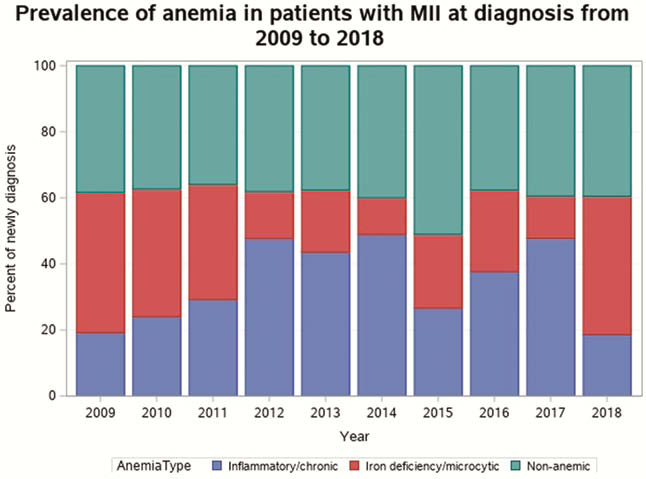 Anaemia remains a prevalent symptom in paediatric patients with IBD, and it is correlated with the extent of intestinal involvement and disease severity. The impact of anaemia at diagnosis and during follow-up on the levels of quality of life and physical activity is currently under investigation.