Management of dysplasia in IBD patients is largely based on outcomes reported by a small number of observational studies, most of which include data from the pre-videoendoscopic era (before 1990). The impact of recent advances in dysplasia detection e.g. high definition chromoendoscopy (HDCE) and endoscopic resection techniques on colorectal cancer (CRC) risk needs to be better understood to inform management decision-making. We conducted an updated review of dysplasia prognosis in the videoendoscopic (VE) era according to lesion morphology, grading and endoscopic resectability.

The search strategy is described in Figure 1. The inclusion criteria were studies of (1) IBD colitis patients with dysplasia, (2) who had a colectomy or at least one colonoscopy on follow-up, and (3) reported on the incidence of CRC, according to the endoscopic visibility, morphology and grade of the index dysplasia. The primary outcomes were: (a) the ‘ (incidental CRC found on colectomy undertaken within 6 months of a dysplasia diagnosis and may represent missed cancers on colonoscopy) and (b) the incidence of metachronous CRC found on follow-up of more than 6 months after a dysplasia diagnosis. Meta-analyses were performed to obtain pooled estimates of the outcomes as appropriate. Quality of the evidence was assessed using GRADE criteria. 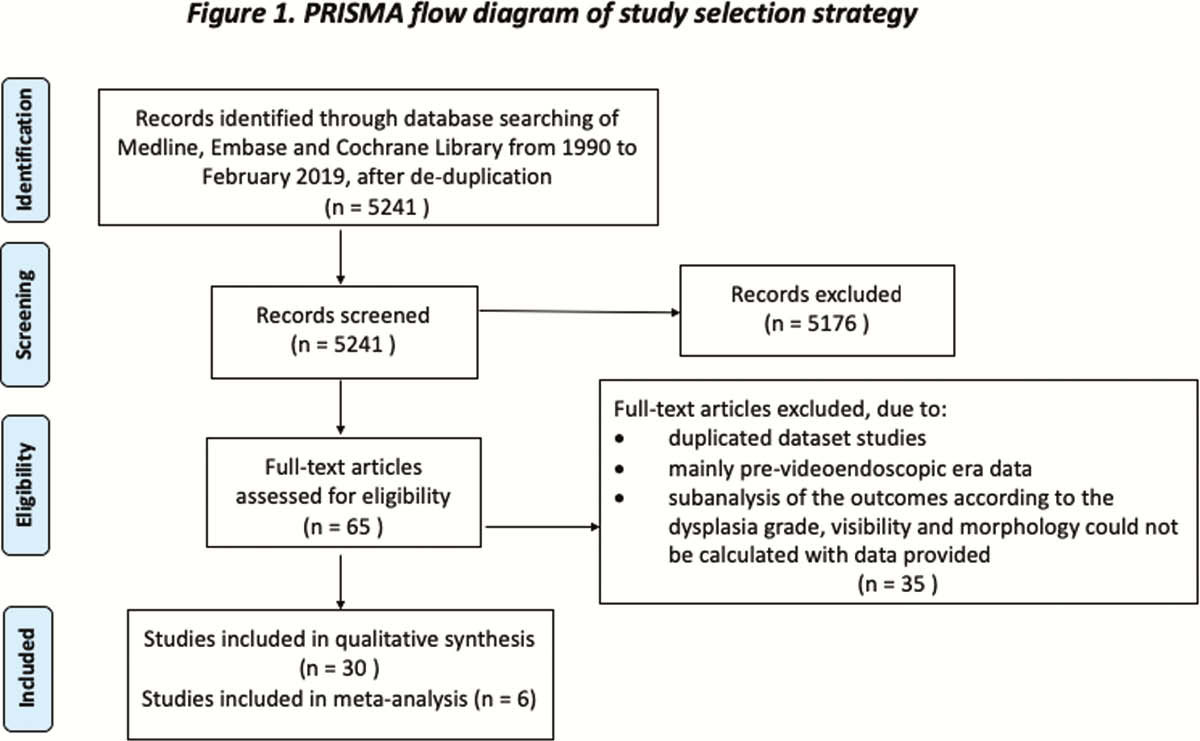 Thirty studies met criteria for inclusion. The pooled estimated prevalent cancer rate for visible and invisible high-grade dysplasia (HGD) patients were 14% (95% CI 0–54; I2=92) and 11% (95% CI 5–20) respectively; for visible and invisible low-grade dysplasia (LGD) patients it was 3% in both groups (95% CI 0–8; I2=19–45); and for indefinite dysplasia it was 1% (95% CI 0–7). Risk of metachronous CRC, 2 years after endoscopic resection of polypoid or non-polypoid LGD were 0–5% and 0–22%, respectively. Risk of metachronous CRC, 2 years after a diagnosis of invisible LGD or indefinite dysplasia were 0–28% and 0–1%, respectively. The lowest rates for both primary outcomes were noted for dysplasia detected during HDCE surveillance and resected with clear histological resection margins.GRADE assessment of the quality of evidence was low or very low due to the inclusion of mainly case series or small cohort studies with heterogeneous populations and limited follow-up.

The results from this review suggest that the recent advances in endoscopic techniques are reducing the rates of prevalent and metachronous CRC. However, the evidence-base informing dysplasia prognosis from the VE era remains of low quality. More long-term data on the risk of metachronous CRC, particularly after the resection of non-polypoid dysplasia, is required to inform decision making.