P295 VALIDation of the IBD-Disk instrument for assessing disability in inflammatory bowel diseases in a population-based cohort: The VALIDate study

Inflammatory bowel diseases (IBD) are disabling disorders. The IBD-Disability Index (IBD-DI) was developed for quantifying disability in IBD patients but is difficult to use. The IBD-Disk is a shortened and visual adaptation of the IBD-DI. It has not been validated yet. The main objectives were to validate the IBD-Disk in a large cohort of IBD patients and to assess its variability over time.

A total of 559 patients (73% Crohn’s disease, 27% ulcerative colitis) were included and 389 were followed up (Table 1). There was a good correlation between IBD-Disk and IBD-DI scores ( 0.75, < 0.001) (Figure 1). The IBD-Disk was significantly higher in patients with active disease according to Physician/Patient Global Assessment (Figure 2), clinical scores (Figure 3), and biomarkers levels, compared with patients with inactive disease. Reproducibility was excellent (intra-class correlation coefficient = 0.90), as well as internal consistency (Cronbach’s α = 0.89). The IBD-Disk score significantly decreased in patients becoming inactive over time.

Correlation between total scores of IBD-Disk and IBD-DI at baseline ( 418). 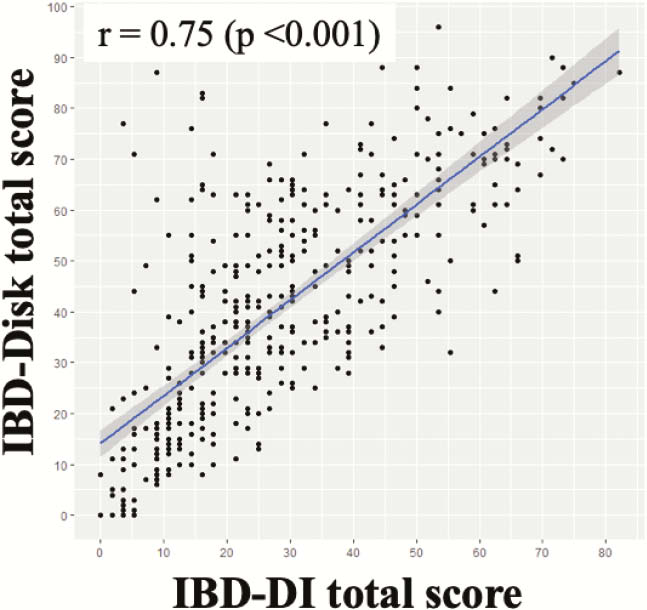 Distribution of IBD-Disk scores at baseline according to (A) HBI score (CD), (B) Mayo sub-score (UC).

This is the first study to validate the IBD-Disk in a large cohort of IBD patients, demonstrating that it is a valid and reliable tool for quantifying disability in clinical practice. Further studies are warranted to assess its correlation with endoscopic activity, to explore its responsiveness to change, and to evaluate the factors associated with disability.