Pediatric inflammatory bowel diseases (pIBD) have specific phenotypes compared to Inflammatory Bowel Diseases (IBD) in adults. The Very Early Onset-IBD (VEO-IBD) is considered a diagnosis of IBD in children before age 6 years old with 15% of prevalence.

The objective of this study was to compare the clinical and endoscopic features of VEO-IBD compared to pediatric IBD ( diagnosis > 6 years old) also in terms of natural history and response to treatment.
The VEO patients followed at the IBD-Centers of Messina and Gaslini were enrolled retrospectively. We compared the results of this population with what is reported in the literature in terms of therapeutic approach and surgery. Percentage comparison of data was performed.

74 VEO-IBD patients were enrolled. At the onset of the disease, during induction therapy, we found 15-21% of VEO-IBDs are corticoresistant, remission was with Infliximab (table 1). During disease follow-up of at least 5 years from onset: CD 47,4% and CU 61,1% of VEO-IBDs remain in therapeutic maintenance with 1st line drugs (Mesalazine and Azathioprine; table 2). This result highlights how the VEO-IBDs also maintain clinical, histological and endoscopic remission even with 1st line drugs, the only exception being the monogenic forms that may also require HSC transplantation.
The surgical approach, according to our data, is far superior to that reported in the literature, although there are several conflicting studies in this regard. Patients undergoing major surgery (colectomy, ileostomy, ileorectoanastomosis, J pouch) are CD 36.8% and CU 18.5%, if we also consider minor surgery (perianal surgery; CD 36.8%) the percentage of patients with Crohn's disease undergoing surgery increases to 52.6%. These numbers are far above what is reported in the literature: 14-15% after 5 years from diagnosis. It is likely that this result is due to the high numbers of procedures performed at Gaslini Institute, National Center for these diseases.
A monogenic form of VEO-IBD was found in 5.4% frequently linked to immunedeficiency, 2 cases (2,7%) required allogeneic HSC transplantation (XIAP, WAS) with complete recovery from disease. 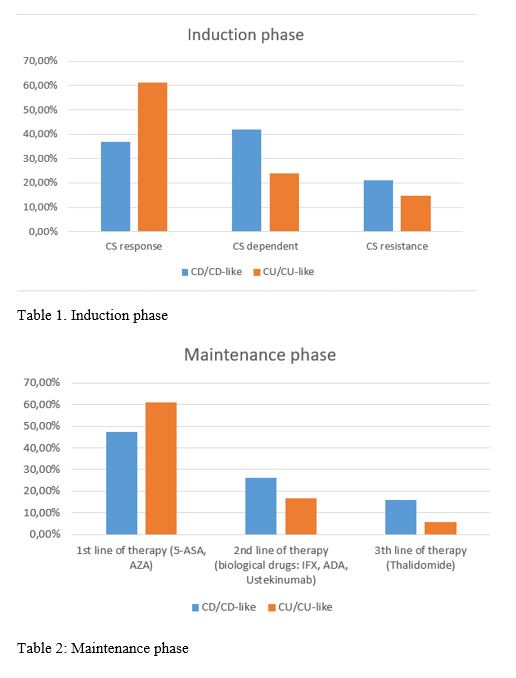 VEO-IBDs represent a challenge for the pediatric gastroenterologist. Therapy is no different in terms of response from pediatric inflammatory bowel diseases, with the exception of monogenic forms who may need HSC transplant. Many VEO IBDs maintain remission with 1st line drugs. Further studies will be needed to define the best therapeutic and diagnostic approach for these diseases.