Data from health records of patients at DoG OUH containing the term ‘PSC’ was screened for IBD and PSC diagnoses, disease activity and severity, as well as follow-up of PSC disease progression and surveillance of PSC-associated malignancies. All data was collected in the last quarter of 2020 and registered in the local IBD registry.

Clinical characteristics [Table 1] and surgical intervention for PSC-IBD [Table 2] are displayed below. In the last year, magnetic resonance cholangiopancreatography (MRCP) was performed in 16 patients (26%), while 47 (78%) had an abdominal ultrasound (US). Colonoscopy or other lower endoscopy was performed within the last year in a total of 42 patients (69%). In those who had not undergone colectomy, 33/40 (83%) underwent colonoscopy in the last year, while 31/40 (78%) had biopsies taken. 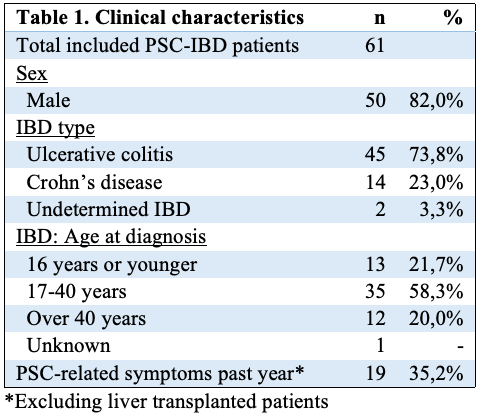 Abdominal US and colonoscopy with biopsies should be performed annually in all PSC-IBD patients1,2, meaning, on average, about one fifth of PSC-IBD patients at OUH may be at risk of unnecessary and preventable affliction. Also, there is a void of guidelines regarding CRC screening in colectomised patients. Evidence for screening for CCA with MRCP remains unclear3, but when performed may indicate severe economic impact on public health systems.