P305 A location-based prediction model in Crohn’s disease regarding a novel serological marker, anti-Chitinase 3-like 1 autoantibodies

A defective neutrophil regulation in IBD is thought to play an important role in the onset or manifestation of IBD, since it could lead to damage of the intestinal mucosal barrier by infiltration of neutrophils in the inflamed mucosa and the accumulation of pathogens. Like neutrophils in the context of innate immune responses, immunoglobulin A (IgA) as an acquired immune response partakes in the defence of the intestinal epithelium. Under normal conditions, IgA would contribute to the elimination of microbes, but in connection with the loss of tolerance to CHI3L1 in IBD, IgA could participate in the CHI3L1-mediated improved adhesion and invasion of potentially pathogenic microorganisms. The tolerance brake to CHI3L1 and the occurrence of IgA auto-Abs to this particular target, the exact role and underlying mechanisms of CHI3L1 in the pathogenesis of IBD are still unclear.

We aim to determine the predictive potential of immunoglobulin subtypes of a novel serological marker, anti-chitinase 3-like 1 autoantibodies (aCHI3L1) regarding determination of disease phenotype, therapeutic strategy and long-term disease course in a prospective referral adult IBD patient cohort. Immunoblotting of antineutrophil-cytoplasmic antibody-positive sera of IBD patients on neutrophil proteins and MALDI-TOF mass spectrometry were used to identify autoantigenic targets in IBD. Sera of 257 CD and 180 UC patients were assayed for IgG, IgA, and secretory IgA (sIgA) type aCHI3L1 by enzyme-linked immunosorbent assay using recombinant CHI3L1 along with 86 healthy controls (HCONT).

IgA type was more prevalent in CD than UC (29.2 vs. 11.1%) or HCONT (2.83%; 0.0001 for both). However, sIgA subtype aCHI3L1 positivity was higher in both CD and UC compared with HCONT (39.3 and 32.8 vs. 4.65%, respectively; 0.0001). The presence of both IgA and sIgA aCHI3L1 antibodies was associated with colonic involvement ( 0.0001 and 0.038, respectively) in CD. Complicated disease behaviour at sample procurement was associated with the presence of aCHI3L1 sIgA positivity (57.1% vs. 36.0%, 0.009). Whilst, IgA type aCH3L1 was more prevalent in patients with frequent relapse during the disease course in CD (46.9% vs. 25.7%, 0.005). In a group of patients with concomitant presence of pure inflammatory luminal disease and colon involvement at the time of the diagnosis, positivity for IgA or sIgA type aCH3L1 predicted a faster progression towards complicated disease course in time-dependent models. This association disappeared after merging subgroups of different disease locations. 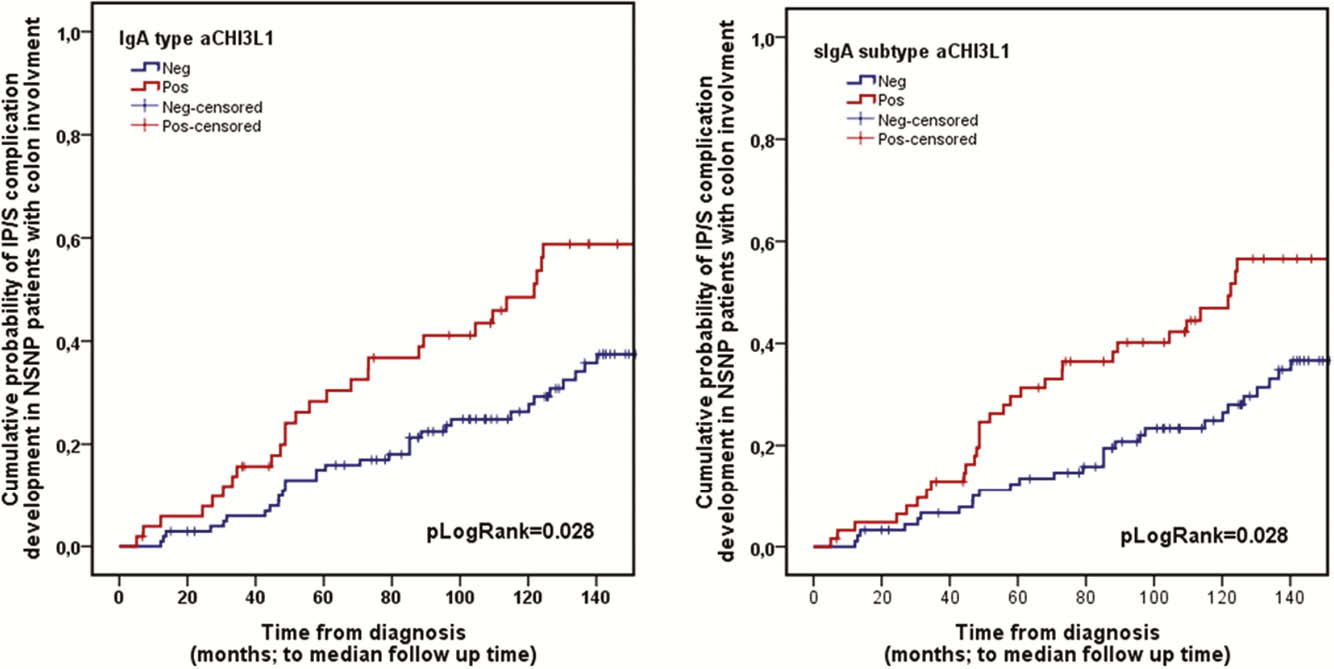 CHI3L1 is a novel neutrophil autoantigenic target in IBD. Consideration of antibody classes along with location-based prediction can revolutionise the future of serology in IBD.