P325 Performance of new MRI scores: the modified Van Assche Index and the MAGNIFI-CD in the evaluation of the response to anti-TNFα in anoperineal fistulas in Crohn's disease

Despite considerable therapeutic advances over the last two decades in the management of Crohn's disease(CD), complex anoperineal fistulas(APF) still constitute a real therapeutic challenge for the practitioner. Treatment is mainly medico-surgical, combining seton drainage and biotherapy. The ultimate goal is to obtain a deep remission, which combines clinical remission and a normal perineal MRI. Thus, several MRI scores have been proposed to assess the therapeutic response of APF to biotherapy.

The aim of this study was to investigate the reliability of the new MRI scores: the modified Van Assche Index(mVAI) and the MAGNIFI-CD in the evaluation of the response of APF to anti-TNFα, by comparing them to the old version of the Van Assche Index(VAI).

We conducted a retrospective study, including all patients followed up for CD with APF treated with anti-TNFα over a 10-year period [2010-2020]. Clinical, biological, morphological and evolutionary data were collected. VAI, mVAI and MAGNIFI-CD scores were calculated from data provided by perineal MRI: number, locations, extensions and lengths of fistulous tracts, characteristics of collections. Clinical response to anti-TNFα was assessed by proctological examination, at the end of which the patients were classified into two groups:

A statistical study was carried out to compare the performance of the different scores in assessing the response to treatment by calculating the area under the ROC curve with a 95% confidence interval.

A total of 38 patients were included. The mean age was 42 years [26-73] and the sex-ratio M/F was 0,4. All patients had received anti-TNFα after disappearance of perineal collections if initially present (Infliximab in 35 cases(92,1%) and Adalimumab in 3 cases(7,9%)) combined with thiopurines in 97,4%. The average duration of anti-TNFα therapy was 46 months [5-180]

The means of the different scores were calculated in responders and non-responders before and after anti-TNFα treatment respectively:

A decrease in all three scores was observed after anti-TNFα treatment in the responders, in contrast to the non-responders, thus confirming therapeutic failure.

Furthermore, the AUROC of the VAI, mVAI and MAGNIFI-CD scores in the assessment of response to anti-TNFα in APF were 0,925, 0,908 and 0,869 respectively. 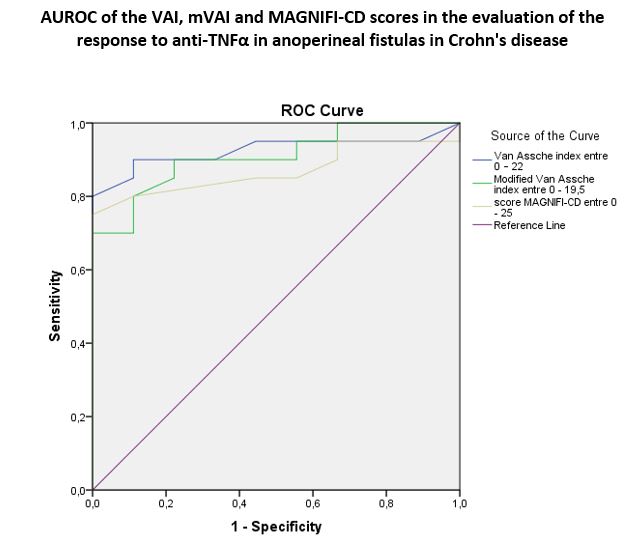 Our results suggest that the old version of the VAI, as well as the mVAI and MAGNIFI-CD, are reliable scores with comparable performance in the assessment of response to treatment in APF in CD.