The therapeutic landscape for inflammatory bowel disease (IBD) has expanded in recent years. The anti-TNF drug adalimumab remains one of the most commonly prescribed treatments. However, rates of loss of response to adalimumab are significant. Therapeutic Drug Monitoring (TDM) has emerged as a tool to prevent loss of response to treatment but there is no consensus on the optimum TDM testing strategy. 2 testing strategies are commonly used - proactive TDM (pTDM), performed during sustained clinical response and reactive TDM (rTDM), performed following loss of response. The aim of this work was to compare adalimumab drug levels (DL) and drug survival (DS) for patients exposed to pTDM compared to rTDM testing strategies.

Data for patients with IBD, treated with adalimumab, and exposed to TDM, was extracted from the Scottish Biologic TDM database. Patients were assigned to pTDM or rTDM groups based on the indication of their first TDM test. Prescribing information was extracted from the NHS Scotland Safe Haven homecare prescribing database. Homecare delivery dates were used to infer start and end dates of adalimumab treatment. Where adalimumab start date was before 2017, a start date of 1/1/2017 was used to coincide with the introduction of the Scottish TDM service. The study period was 1/1/2017 to 1/3/2020 giving a maximum duration of drug exposure of 38 months. The most recent drug level was used for each patient to reflect the impact of the TDM strategy employed. SPSS was used to perform statistical analysis. 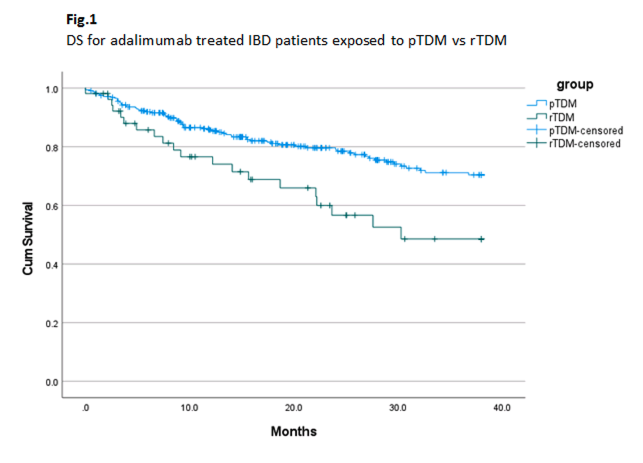 pTDM has been clearly favoured by clinicians from the outset of the TDM service. Whilst our data shows that DLs do not vary significantly between TDM groups, importantly, the DS with adalimumab is longer with pTDM as part of routine clinical care, when compared to rTDM. Further evaluation of clinical outcomes including steroid prescription, hospital admissions and surgery rates in the context of pTDM and rTDM strategies is therefore warranted, and in progress.