During restorative (completion) proctectomy and Ileal pouch-anal anastomosis (IPAA), rectal dissection can be performed in either the total meso-rectal excision (TME) plane with anterolateral exception, or as a full close rectal dissection (CRD). CRD showed lower postoperative morbidity and better short-term quality of life (QOL) when compared to TME. We aimed to compare the incidence of chronic pouch failure (PF) in patients undergoing TME or CRD during proctectomy followed by IPAA for inflammatory bowel diseases (IBD).

This mono-centre retrospective cohort study included consecutive patients who underwent IPAA surgery for UC from January 2002 to October 2017 in a tertiary IBD referral centre. Outcomes of this study were chronic pouch failure (PF) rates and PF-free survival between patients who underwent CRD and TME. Chronic PF was defined as a pouch-related complication occurring < 3 months after IPAA surgery requiring pouch-redo surgery, -excision or definitive ileostomy without excision. PF-free survival was defined as months between date of functional pouch and date of surgical PF. Multivariable cox- regression was used to determine whether CRD as dissection type had impact on PF-free survival, when compared to TME. (Chronic) anastomotic ileal pouch-anal leakage and fistula were also included in analyses as confounding factors, which is in line with available literature1. 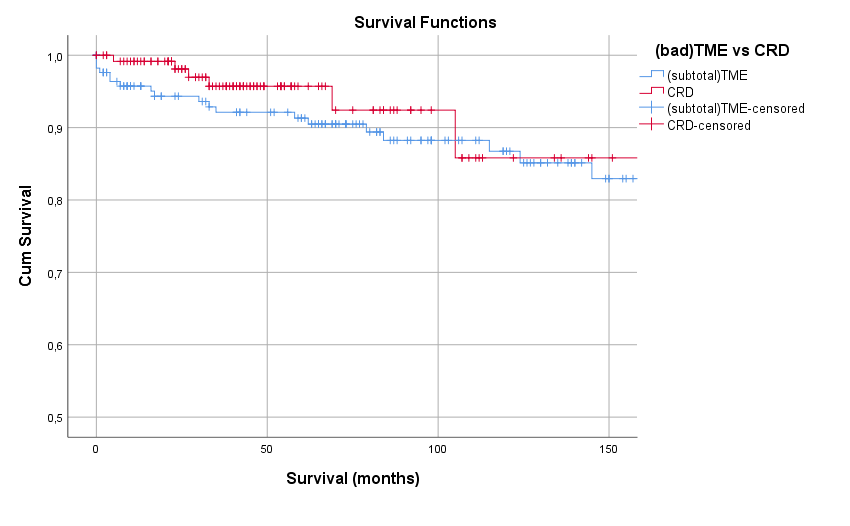 In the current study, we did not observe a significant difference in chronic PF after either CRD or TME. Although data on long-term functional outcomes and QOL are necessary to draw final conclusions, results of this study suggest that long-term outcomes of CRD were comparable to outcomes after TME. As an earlier study concluded CRD is beneficial when it comes to postoperative morbidity and short-term QOL, surgeons should consider performing close rectal dissection during IPAA surgery for IBD.