In the UNIFI clinical study of ustekinumab (UST) in ulcerative colitis (UC), an endoscopic subscore (ES) was assigned by a local endoscopist, and the video was reviewed by central readers who provided an independent ES. Here, we determined ES agreement between local and central readers.

At I-0, 98.2% of 1051 endoscopies with FES 2/3 were also scored 2/3 by local ES, while for the 104 with FES 0/1, 49% had a local ES 2/3. At I-8 and M-44 (primary endpoint timepoints), the local ES and FES agreed 87% (785/899) and 80% (497/625), respectively. The proportions of subjects with clinical remission and endoscopic improvement were slightly higher when using the local ES compared to the FES (Figure 2), whereas clinical response rates when using the local ES were similar to FES. Despite these findings, treatment differences between UST and placebo were generally similar when local ES and FES were used to calculate clinical remission at I-8 and M-88.

Approximately 90% of endoscopies had an image quality considered “optimal” or “readable with certainty but with minor technical difficulties” by central readers. Overall, image adequacy did not impact agreement between readers.

Even though agreement between local and central readers was fair and less than that between the central reader and adjudicator, the overall impact on primary and secondary study endpoints was minimal. Overall, the use of both local and central ES to determine the FES yielded a robust and reliable measure for study endpoint determination, however, efforts facilitating reproducible endoscopic assessments in UC are warranted. 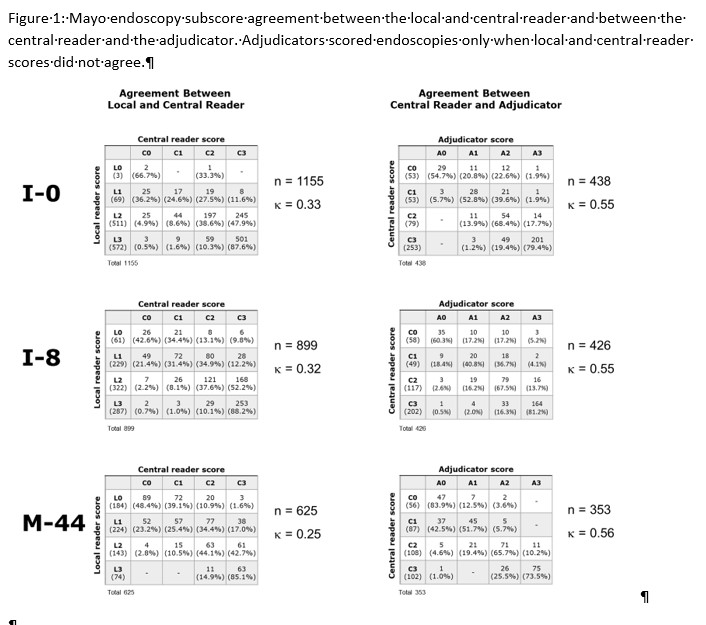 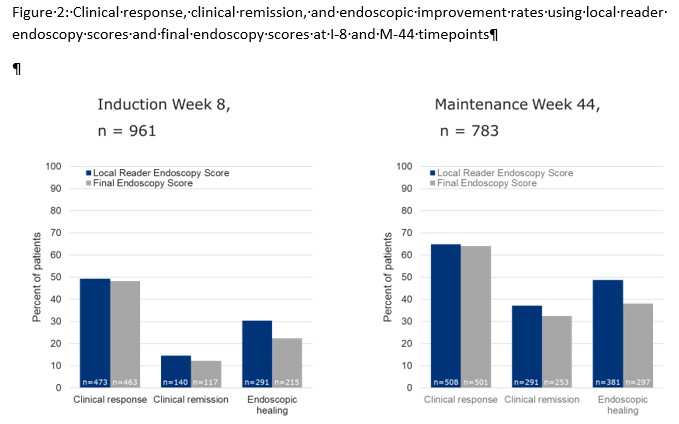