P396 Acceptance of switch, patient satisfaction and adverse events after switch from adalimumab originator to biosimilar SB5 in patients with Inflammatory Bowel Disease in a real-life setting

SB5 is approved as a biosimilar of the adalimumab originator. However, data on patient acceptance of switch from originator to biosimilar, patient satisfaction, adverse events and nocebo effects are lacking, especially in the inflammatory bowel disease (IBD) population. We sought to elucidate these issues in a real-life switch IBD population.

IBD patients, in clinical remission or stable response, treated with adalimumab originator in 2 Belgian centers were offered to participate in this phase IV, interventional trial. Switch was voluntary and was offered after being informed about biosimilars. Satisfaction with the switch and local discomfort after injection (within and after 30 minutes) was semi-quantitatively (visual analogue scales (VAS)) assessed at baseline and 8 weeks, 6 months and 12 months after switch. Reasons for non-switch, discontinuation and adverse events were documented.

An acceptance of switch rate of 79.3% was observed. Fifteen patients reported 22 reasons for refusal; the most common were fear for a flare (n = 8), ease to stay on the originator (n = 4) and absence of trust in biosimilars (n = 3). No patient-related demographic factors associated with refusal of switch could be defined. By month 12, 28 patients discontinued SB5 for several reasons; the most frequent being high anti-adalimumab antibodies at baseline (n = 5), secondary loss of response (n = 3), injection site pain (ISP) (n = 8) and other adverse events (n = 10) not causally related to SB5. At month 12 after switch, 74.5% of the study population was still treated with SB5 (table 1). The median VAS for local discomfort up to 30 minutes after injection of the originator was 1/10 and increased significantly to values between 2 and 3/10 at the different time points on SB5 (p < 0.001 for all) (table 2). However, the median VAS for local discomfort after 30 minutes was between 0 and 1/10 at all time points, which was not significantly different compared to the originator. Nevertheless, satisfaction with the decision to switch was high and remained stable over the different time points with a median VAS between 7 and 8/10, which was not significantly different compared to baseline. 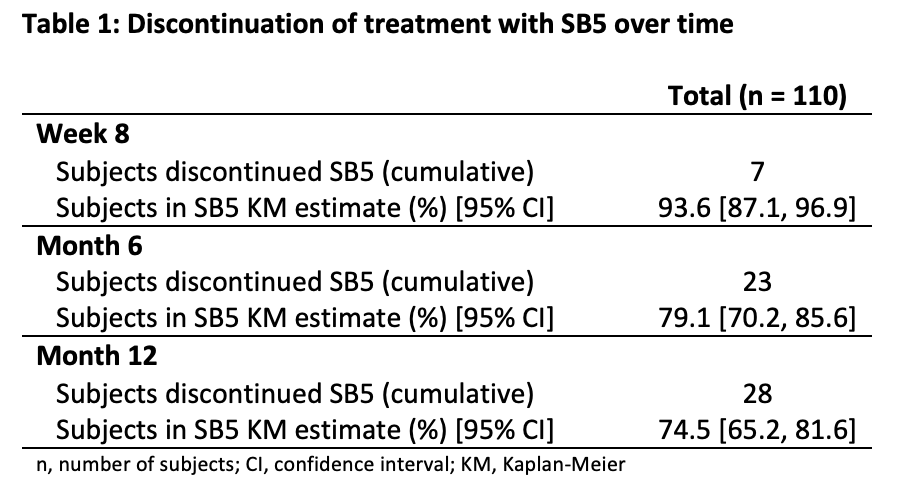 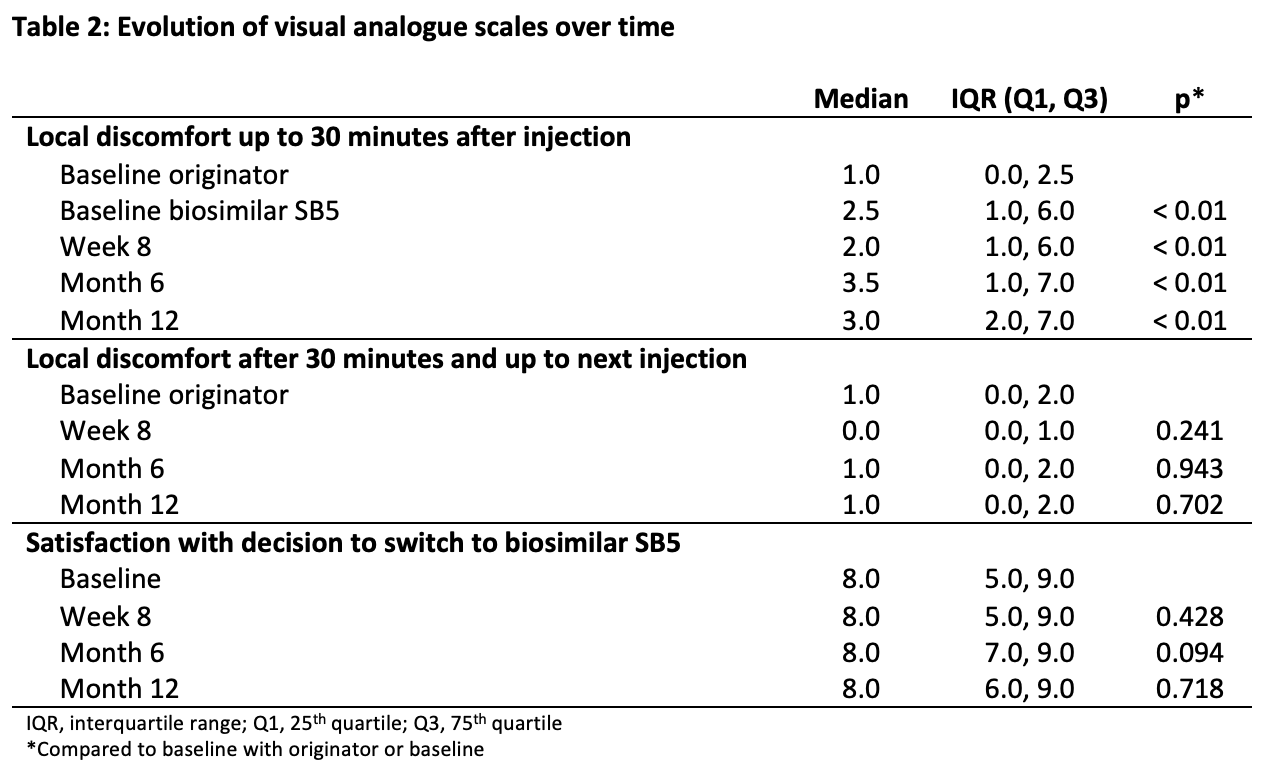 After being well informed, the great majority of patients treated with adalimumab originator is willing to switch to biosimilar SB5. The rate of satisfaction under treatment with SB5 is high and remains stable over time. The most important reasons for discontinuation were adverse events, which could be mostly attributed to the nocebo effect and to ISP. Of note, patients in general report a higher, temporary, local discomfort within 30 minutes after injection with SB5.