Small molecules are being added to the treatment armamentarium of ulcerative colitis (UC). In contrast to monoclonal antibodies, very little is known about their pharmacokinetic-pharmacodynamic profile. We therefore assessed pharmacokinetic-pharmacodynamic changes in Tofacitinib (TFC) treated UC patients, with a focus on STAT3 phosphorylation, as it has been proposed as a marker of efficacy.

Thirty UC patients initiating TFC therapy 10mg BID were prospectively monitored (Table 1). At week 8, patients could de-escalate to 5mg BID or maintain 10mg BID depending on their response. Endoscopic assessment and sampling (colonic tissue and serum) was performed at baseline and 8-16 weeks after TFC initiation. Endoscopic improvement was defined as Mayo endoscopic subscore 0-1. TFC was extracted from tissue using acetonitrile, dried down and quantitated using mass spectrometry. Both total as well as phosphorylated STAT3 were measured in lysed tissue using specific antibodies with an ultrasensitive luminescent oxygen channelling assay. 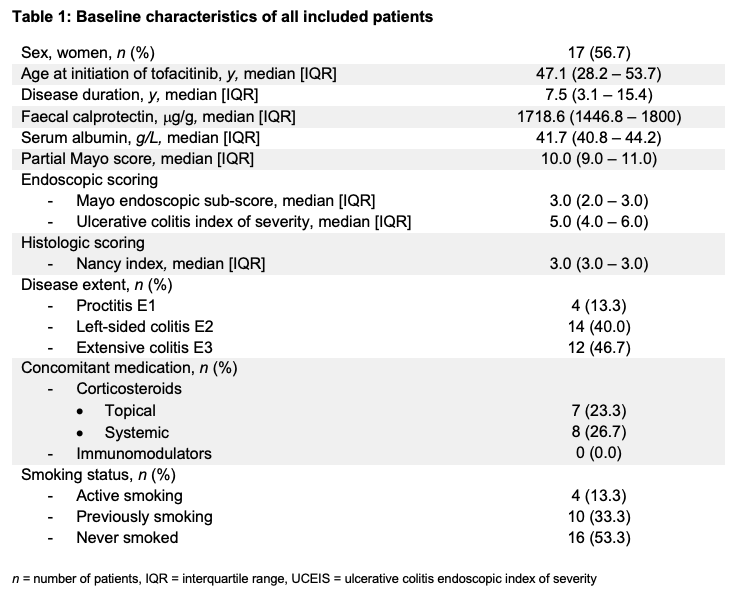 Tofacitinib tissue (A) and serum (B) exposure at the end of high dose induction in relation to the achievement of endoscopic improvement at week 16, defined by a Mayo endoscopic sub-score of 0-1.

We could demonstrate for the first time a mucosal exposure-response relationship with TFC in UC patients. Additionally, pSTAT3/STAT3 ratio was identified as potential molecular marker to track response directly linked to the mode-of-action of TFC. Whether an increased local dose of TFC could result in better efficacy without compromising safety should be further explored.