P407 Thiopurines: use them or lose them? Results of an international survey

With the development of new drugs for inflammatory bowel disease (IBD), the role of thiopurines in the therapeutic algorithm of Crohn’s disease (CD) and Ulcerative Colitis (UC) is questioned. We aimed to investigate the current practice and future perspective of IBD physicians regarding the efficacy, safety, and role of precision medicine of thiopurines in IBD.

A 29-question web-based survey was developed and distributed to IBD physicians internationally, via national IBD associations and word of mouth. The final survey form was reviewed and approved by the clinical committee of ECCO. In the absence of a universal definition of an “IBD expert”, we defined them as senior physicians observing more than 20 patients per week.

Complete answers from 408 physicians from 50 countries were obtained, the majority from European countries. Participants were mainly experienced physicians in IBD, with 26.0% meeting our definition of “IBD expert”. Only four physicians reported not using thiopurines in clinical practice. Azathioprine was the most used drug (97.1% of participants), while 61.3% of physicians reported using mercaptopurine; only 6.6% of participants used thioguanine. Most respondents used thiopurines in both monotherapy and in combination therapy, for both CD and UC, and consider them as effective treatments (Figures 1 and 2). Respondents tended to consider thiopurines as drugs with a good safety profile, with the agreement of 61.5% of the overall cohort; this was true especially in patients aged between 30 and 50 years old, with the agreement of 80.2% of the overall cohort (Figure 3). Access to TPMT activity assessment and metabolites measurement varied regionally. Physicians considered access to metabolites measurement as an important tool to improve thiopurines' efficacy and safety, and to increase confidence when prescribing these drugs (Figure 4). Only a minority of the physicians (~6%) considered that thiopurines will not be used in the future in IBD, while 57.8% believed they will still be used both in mono and combination therapy in CD and UC. 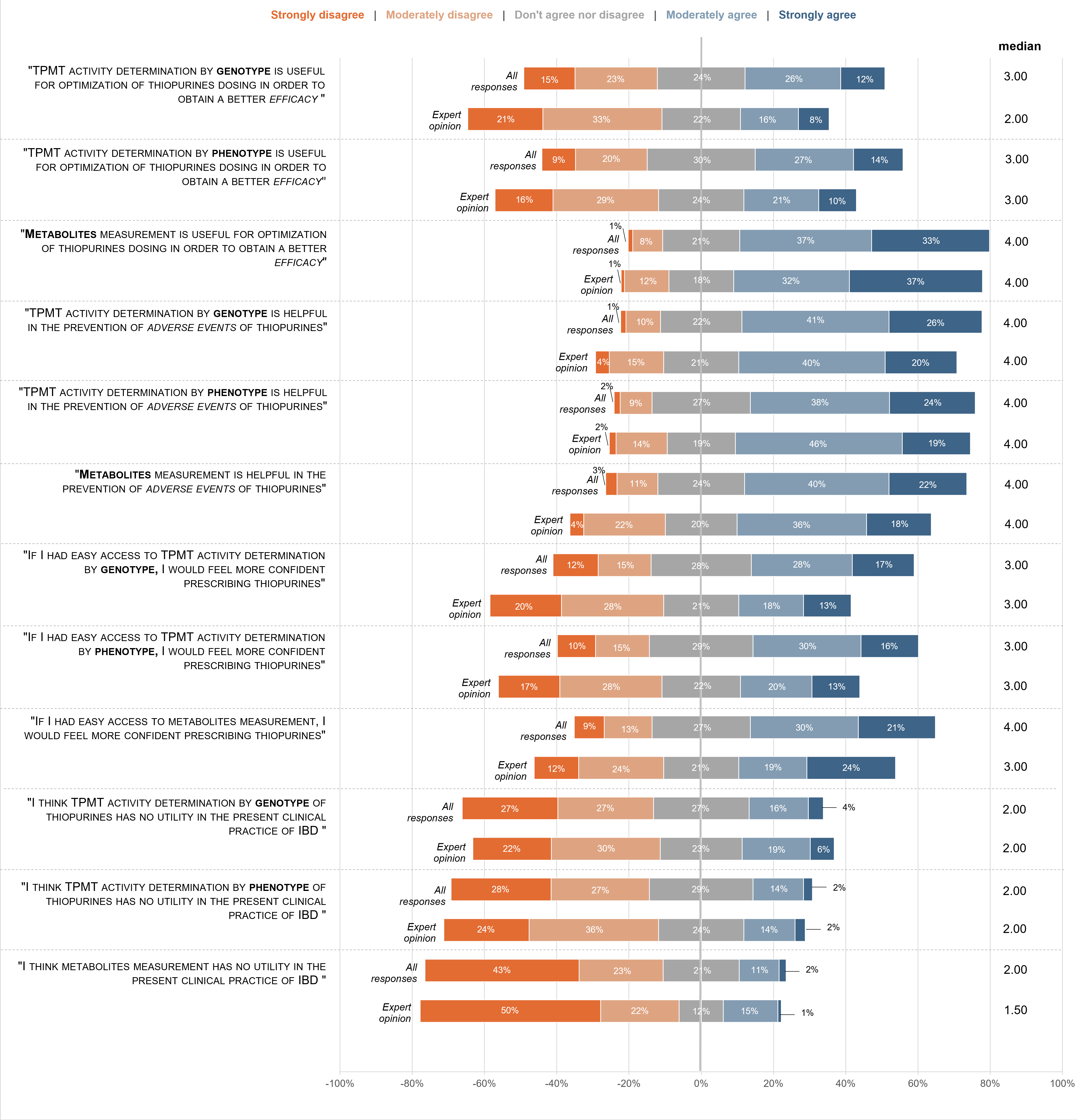 Despite the many emerging treatments in IBD, thiopurines will still be part of the treatment algorithm of both CD and UC in the future. Access to tools for precision medicine varies around the globe, and wider implementation of these instruments, especially metabolite measurement, may improve confidence in thiopurines prescription, improving safety and efficacy.