P429 Mesalazine has no place in the treatment of Crohn's disease. Really?

According to international guidelines mesalazine may have no place in the treatment of Crohn’s disease (CD). However, real-world studies have shown a defined 5-ASA-dependent group of patients with CD whereas a large proportion of CD patients in the community is still being treated with mesalazine. We aimed at studying the clinical, biomarker and endoscopic characteristics and the course of disease in a selective group of patients on maintenance treatment with mesalazine since the diagnosis of CD.

This is a prospective, single-center study. Patients followed in IBD clinic were included in a 15-yearlong observational study starting in the 1st year after confirmed diagnosis of CD provided that they were in deep remission defined as clinical remission (Harvey-Bradshaw Index, HBI, <5, with normal biomarkers [C-reacting protein (CRP) <0.6 mg/dl and/or Faecal Calprotectin (FC) <150 μg/g faecal tissue] and complete or near complete mucosal healing (<10 or <5 focal micro-aphthous or aphthous ulcers, respectively) assessed by ileocolonoscopy and/or capsule endoscopy. Patients with normal HBI but persistent elevations of CRP and/or FC at baseline were excluded. Patients were followed prospectively every 3-6 months with HBI score, FBC, LFTs, CRP and/or FC; ileocolonoscopy or CE were performed every 2-3 years unless they had a flare of CD. Patients who during follow up developed a flare (HBI>4) associated with persistently abnormal CRP and FC and deterioration of the endoscopic findings vs baseline were considered as treatment failures.

Patient demographic, clinical, biomarker and endoscopic data at baseline and during the course of CD is shown in Table 1. Ileocolonoscopy findings remained persistently unchanged in all but 2 patients who developed a flare and needed escalation of treatment after 2 and 3 years, respectively. CE was performed at two different times during follow up in 8 patients with L1 phenotype and did not show any change in the number of detected lesions. Overall, 35 of 55 patients had a voluntary drug holiday for 4-6 months resulting in a rise of HBI to 6-8 and mild elevations of FC (200-300 μg/g) but not of CRP; however, clinical symptoms were relieved and HBI and FC returned to normal following re-initiation of mesalazine indicating 5-ASA dependence. None of the patients reported disease complications or treatment-related adverse events 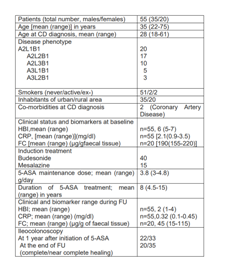 There is a distinct group of non-smoking patients with mild CD (on clinical, biomarker, and endoscopy grounds) at diagnosis who are in deep remission at the end of the 1st year following treatment with mesalazine. These patients maintain a 5-ASA-dependent deep remission as long as they are compliant with treatment.