Inflammatory bowel disease (IBD) is a chronic, debilitating disease with suboptimal success rates after conventional treatments. A potential new, additional approach is hyperbaric oxygen therapy (HBOT). We aimed to evaluate the efficacy and safety of HBOT in patients with IBD.

A systematic review of the published literature regarding HBOT as treatment for IBD was conducted according to the PRISMA guidelines. MEDLINE, Web of Science, EMBASE and the Cochrane Library were systematically searched. Search terms included ‘Hyperbaric Oxygenation’, ‘Inflammatory Bowel Diseases’, ‘Crohn’ and ‘Colitis’. All human studies with ≥5 patients and animal studies evaluating HBOT for IBD were included. Primary outcome was clinical response rate to HBOT. Secondary outcomes were radiological and endoscopic response rate, laboratory findings, adverse events and quality of life (QoL).

The literature search resulted in 948 publications of which 26 were included (Figure 1); 11 human studies (778 patients) and 15 animal studies (554-558 animals). Seventeen were randomised controlled trials, 8 prospective cohort studies and 1 was a retrospective cohort study. The overall clinical response rate after 5-86 HBOT sessions was 82.1% (88.1% for ulcerative colitis and 78.7% for Crohn’s disease (CD)). Perineal CD was described in 56 patients, with a clinical response rate of 75%. The endoscopic response rate ranged from 50-100% in 4 studies and the radiological response in 1 study was 100%. Only one study described quality of life (QoL) and showed no significant differences in QoL between the HBOT and control group.  Adverse events were described in 6 studies and occurred in 9 out of 75 patients (0.12%).

Animal studies reported less weight loss after HBOT and a significantly decreased Disease Activity Index compared to controls. Furthermore, histopathological features and laboratory values including inflammatory markers (such as TNF-α and IL-1) and oxidative stress markers (such as myeloperoxidase and malondialdehyde) improved after HBOT. 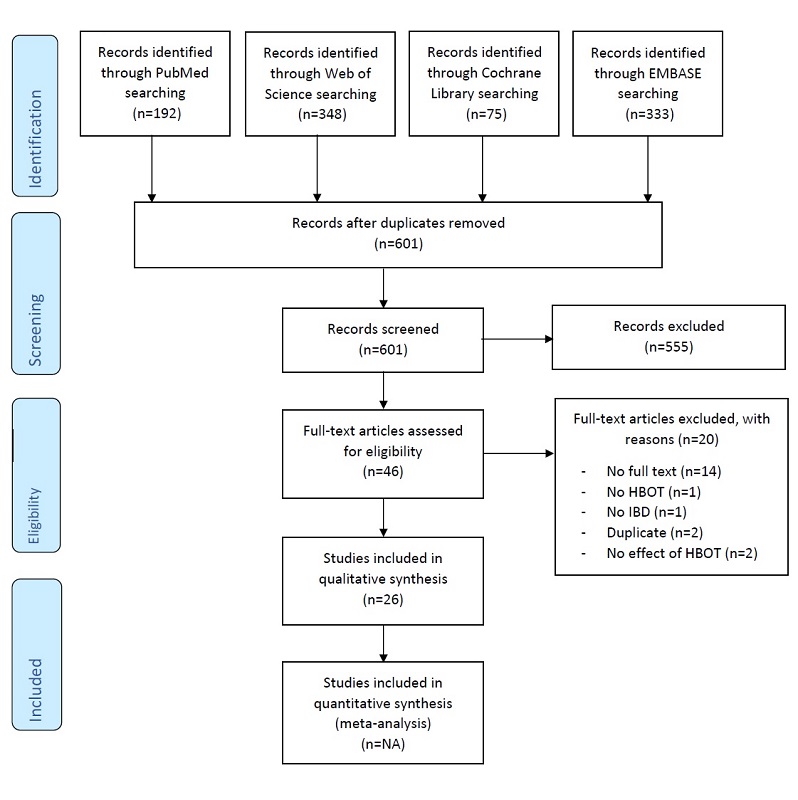 HBOT is a promising IBD treatment with high clinical-, radiological- and endoscopic response rates and few adverse events. Animal studies support these findings. The challenge now is to identify the appropriate amount of HBOT sessions and timing in the IBD treatment process and to identify which IBD patients can benefit most from HBOT.