The IBD-Disability Index (IBD-DI) is a quantitative measure of disease impact on physical activity and social participation, with higher sores indicating greater disability. Prior studies have been cross-sectional, but few studies have longitudinally measured disability with IBD treatment.

111 patients (65 males and 46 females) completed survey 1, 79 completed survey 2, and 63 completed survey 3. There were no significant differences in baseline demographic, disease activity, or psychosocial scores between participants who completed only survey 1, and those who completed all 3 surveys. The median age was 31 years, 58% had CD, 42% had UC, and 32% were non-white (Table 1). At induction, the median IBD-DI score was 34.0 out of 100. IBD-DI scores did not correlate with age, race, sex, comorbidities, IBD-type, or surgery, but there was a weak correlation with prior biologic use, specifically anti-TNF therapy (Table 1). There was a moderate correlation between clinical disease activity scales and the IBD-DI [HBI, pMayo, and SCCAI (r=0.63, r= 0.56, r=0.55; p <0.001)] (Table 2). Endoscopic scores and biomarkers did not correlate with the IBD-DI. Psychosocial scales correlated strongly with the IBD-DI: SIBDQ, PHQ-9, and the wellbeing and emotional domains of the BIPQ (r=-0.83, r=0.78, r= 0.60, p <0.0001, respectively). Among therapy responders, there was a significant improvement in IBD-DI scores from survey 1 to 3 [median 32 (IQR, 20-43) to 24 (IQR, 14-38), p =0.04] (Table 3). This difference was not observed in treatment non-responders. 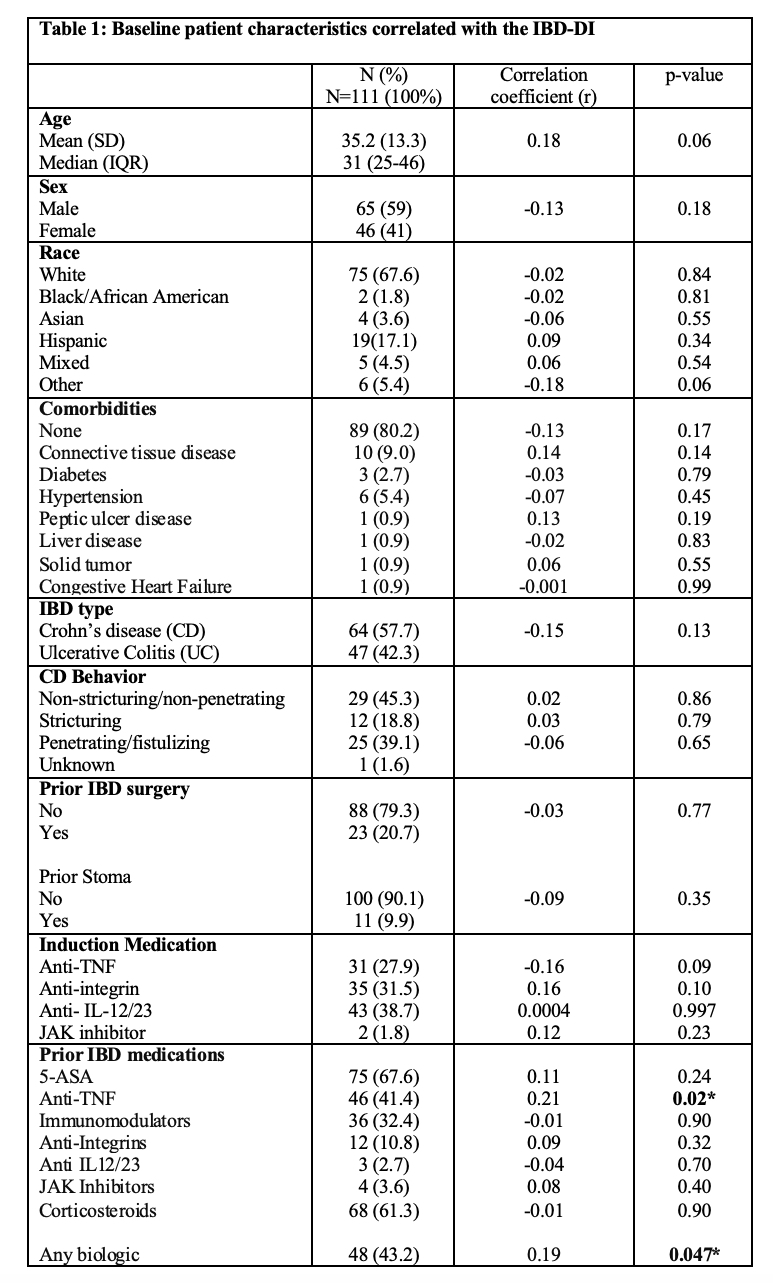 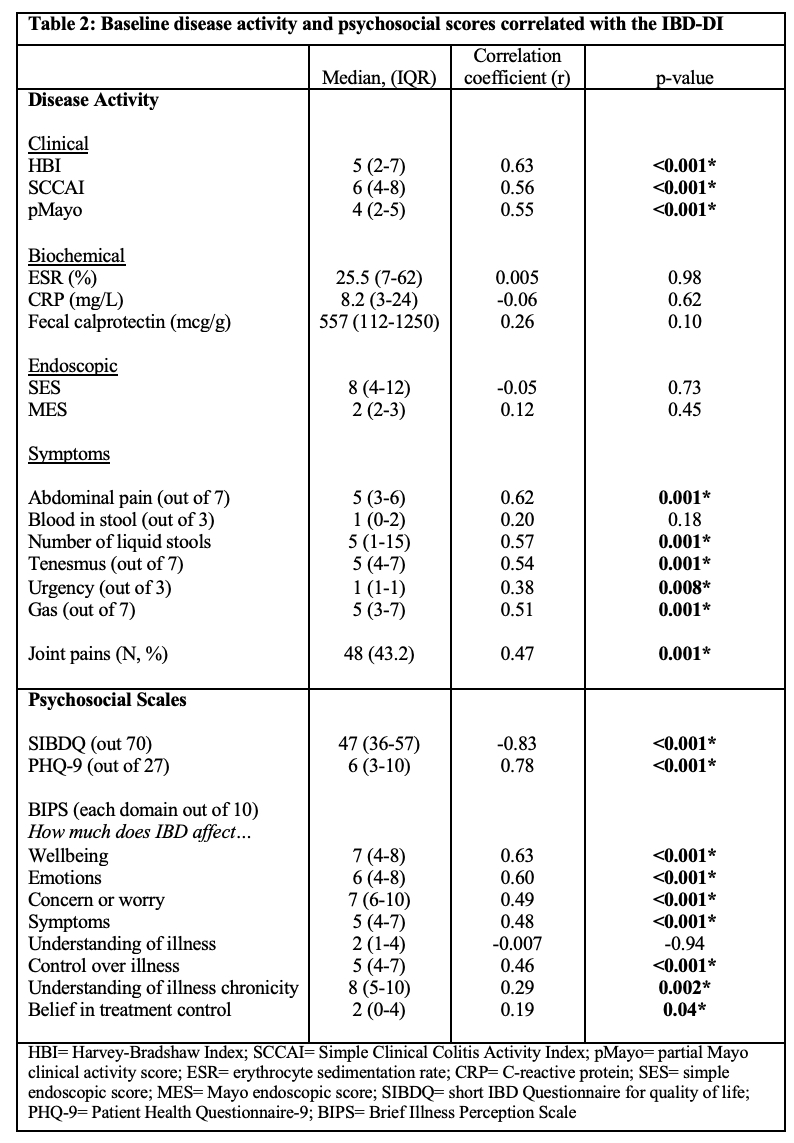 Disability is not commonly measured in clinical studies, but it plays a large role in patients’ overall wellbeing. In this longitudinal cohort, there was a strong correlation between IBD-DI, clinical disease activity, depression, and quality of life indices. Among therapy responders, there was a significant improvement in IBD-DI from a moderate to mild degree of disability. These findings further clarify the relationship between disability, disease activity, and therapeutic response in IBD. 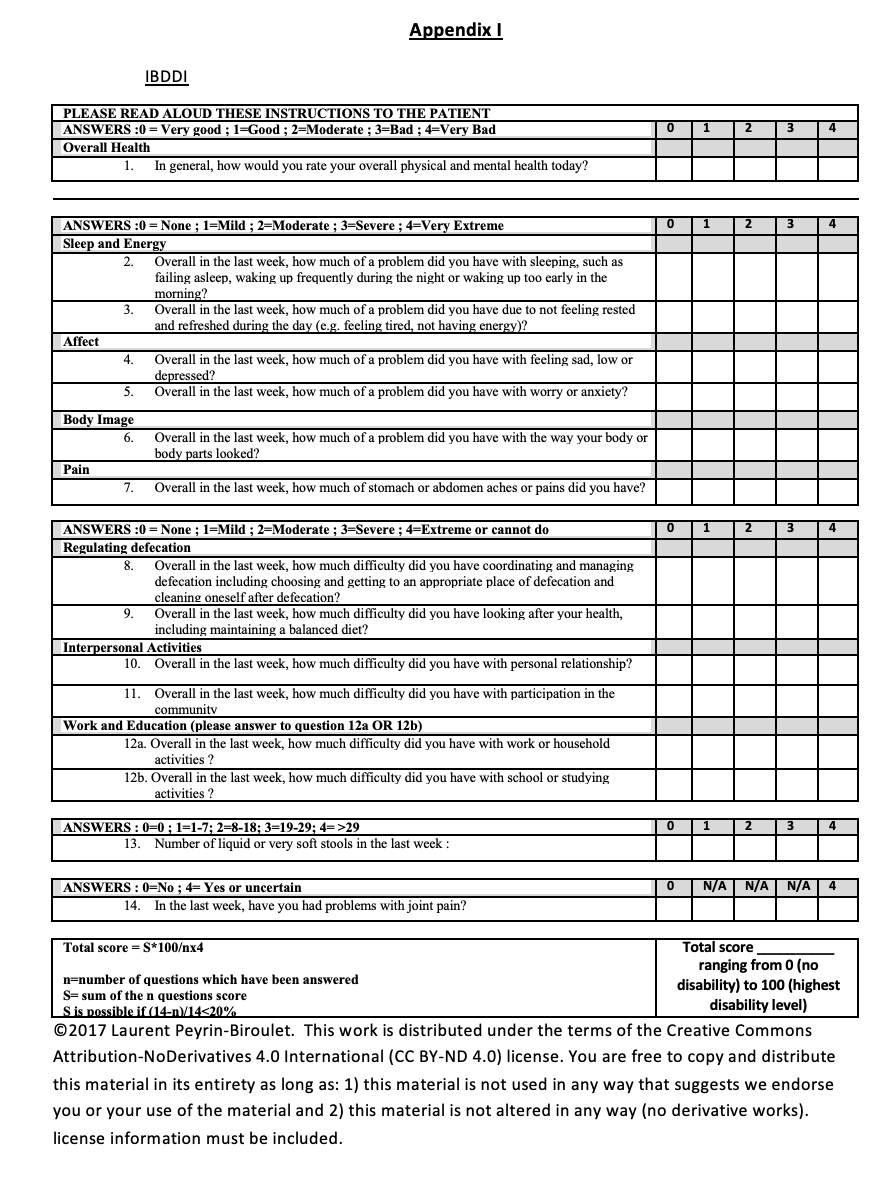