Ustekinumab (UST) is an approved biologic for the treatment of adults with inflammatory bowel disease (IBD: Crohn’s disease [CD] and ulcerative colitis [UC]). Previously, an integrated analysis of safety data through up to 5 years (yrs) showed a favourable safety profile for UST that was generally similar to placebo (PBO) in patients (pts) with IBD, and to the well-established safety profile across other approved indications. Several treatment options exist for newly diagnosed pts with moderate to severe IBD; therefore, long-term safety data from bionaive pts are important to help inform treatment selection in this population. Here, we present an integrated analysis incorporating UST Phase 2/3 long-term safety data from IBD studies through up to 5 yrs in CD and 2 yrs in UC for bionaive pts.

Data from 4 Phase 2/3 UST IBD studies were pooled. In Phase 3, pts received a single IV PBO or UST (130mg or ~6mg/kg) induction dose followed by SC maintenance doses of PBO or UST (90mg q8w or q12w). Patients identified as bionaive (never treated with a biologic) were included in the analysis of data through up to 5 yrs in CD and up to 2 yrs in UC. Concomitant immunomodulators and corticosteroids were permitted. All pts who received ≥1 UST dose were included. Safety outcomes are presented as event rates per 100 patient yrs (PY) of follow-up and 95% confidence interval (CIs). Bionaive UST data from the SEAVUE study (N=191) adjusted for exposure with events per 100 PY, will be shown for comparison. 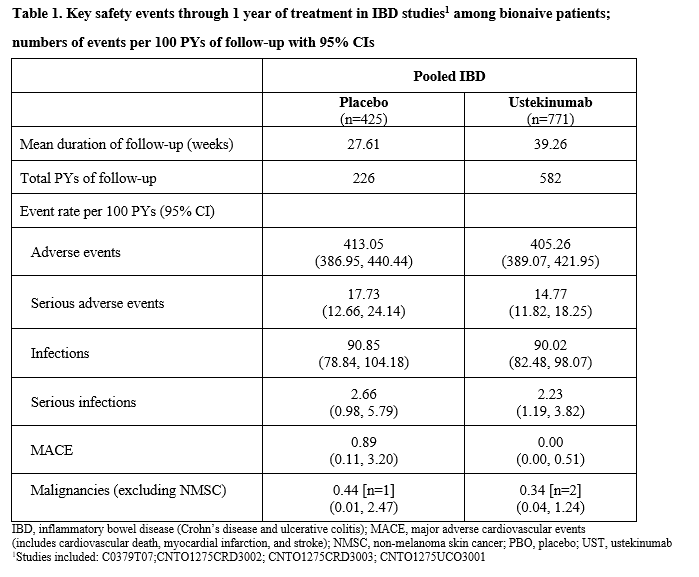 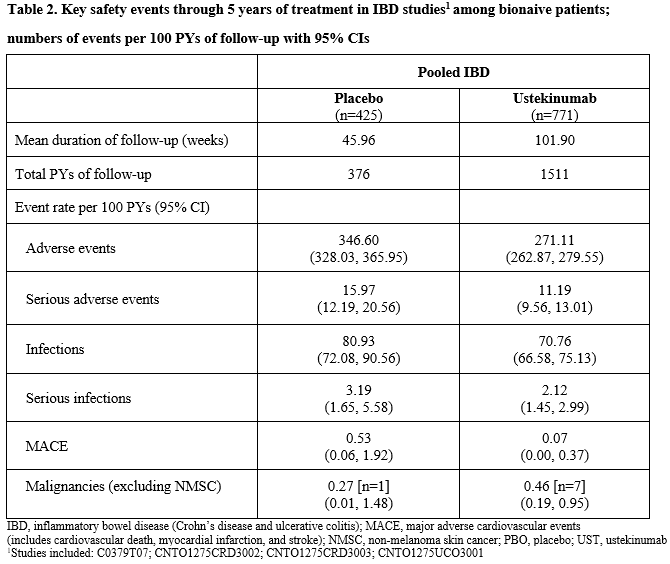 The safety profile of UST in the long-term IBD pooled safety dataset was favourable among bionaive pts and consistent with the well-established safety profile across approved indications.