Although colorectal cancer (CRC) surveillance is embedded in IBD practice, a subset of patients still develops advanced neoplasia (AN; high-grade dysplasia (HGD) and/or CRC). We aimed to determine the most plausible explanations for AN in IBD patients through assessment of inadequate surveillance.

A search of the nationwide histopathology registry of the Netherlands (PALGA) was used to identify IBD patients with AN in seven hospitals. Patients with ulcerative colitis (UC), Crohn’s disease (CD), or IBD-unclassified (IBD-U) from 1 January 1991 until 1 October 2020 were eligible for inclusion. Exclusion criteria comprised familial CRC or AN prior to IBD diagnosis. A root-cause analysis based on the World Endoscopy Organizations’ recommendations was performed to determine inadequate surveillance prior to the first AN, including lack of cecal intubation, insufficient bowel preparation (BBPS<6 or according to colonoscopy report) and active endoscopic inflammation. Interval inadequacy was assessed according to most recent BSG guideline including a six month margin. Associations were assessed with a binary regression model. 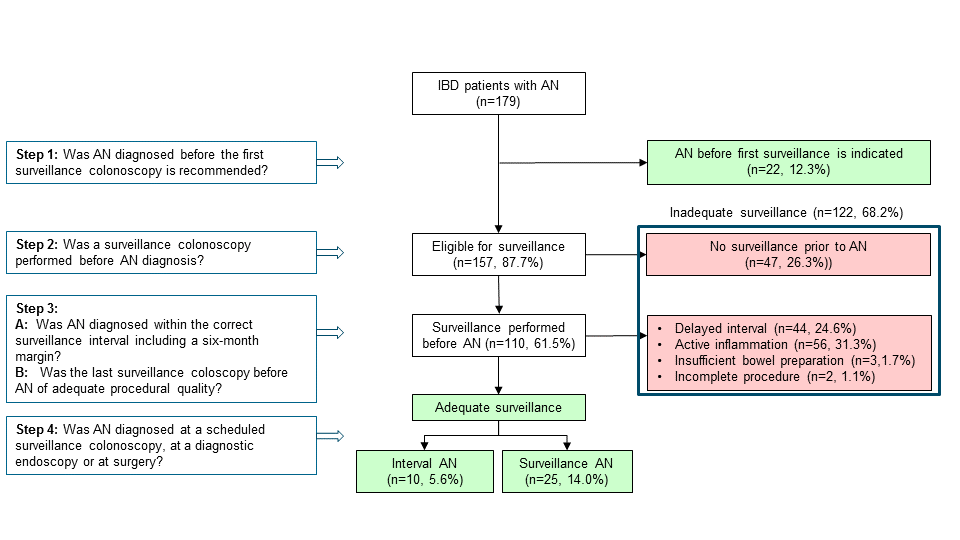