Despite numerous advances in the medical management of IBD, it is estimated that 70-90% of patients with Crohn’s disease require surgical intervention with a significant proportion requiring repeat surgery. There is evidence to suggest that biologic agents may reduce the incidence of disease recurrence and may delay progression to further surgery. We aim to compare disease progression in biologic-naïve patients with patients on established biologic therapy

A retrospective single-centre UK study including patients who underwent primary Ileo-caecal resections for Crohn’s disease between 01/01/2014 to 31/12/2019. Patients were classified according to the Montreal classification. Electronic case records used to obtain patient data. Disease recurrence was defined as active disease on radiological imaging or endoscopic visualisation up until 01/11/2021. Prophylactic treatment included medical therapy initiated postoperatively prior to disease recurrence.

In total, 88 patients, with a median follow-up of 54 months (IQR: 1-104 months), were included (Table 1). Of these, 69 patients had been started on medical therapy prior to surgery and 21 had Biologic treatment. Nearly half of the patients (36/88) underwent emergency resections (Table 2).
Postoperative prophylaxis was given to 28 patients (31.8%), of which 8 were given Biologics. Patients who were smokers were more likely to be offered post-operative prophylaxis (55.56% vs 22.9%). 58 patients (65.9%) developed disease recurrence and 9 patients (15.5%) required further resections. Use of biologic therapy preoperatively was associated with an increased risk of requiring further resections (20.8% vs 6.8% with alternative agents; OR: 3.684, p-value: 0.030). Biologics were continued postoperatively in 5/21 patients and none of these required further resections. Discontinuation of biologics postoperatively was associated with a higher risk of recurrence (68.75%) and further bowel resection (25%). Prophylactic use of biologics had an overall net preventive effect on disease recurrence compared to alternative agents (62.5% vs 89%; OR: 0.417). 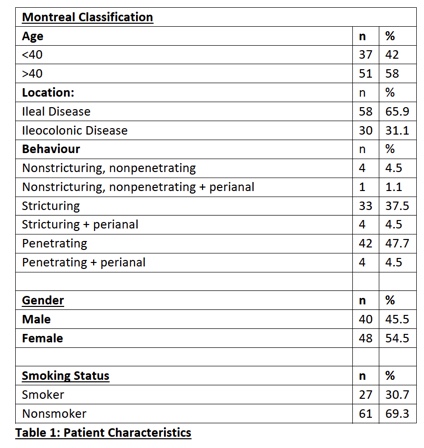 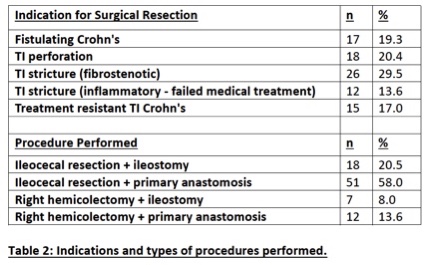 Preoperative biologic therapy can be a marker of more severe disease at presentation and may indicate need for repeat resection. In addition, patients on biologic therapy preoperatively have significantly worse outcomes if this is discontinued in the postoperative period.