Data on the outcomes of surgery due to IBD in pregnant patients is scarce, and primarily dates back more than 3 decades ago. Primary aim: to evaluate the evolution of pregnancies and offspring after surgery due to IBD. Secondary aims: to describe the indications for surgery, the surgical techniques used, and the frequency of caesarean section concomitant to surgery for IBD 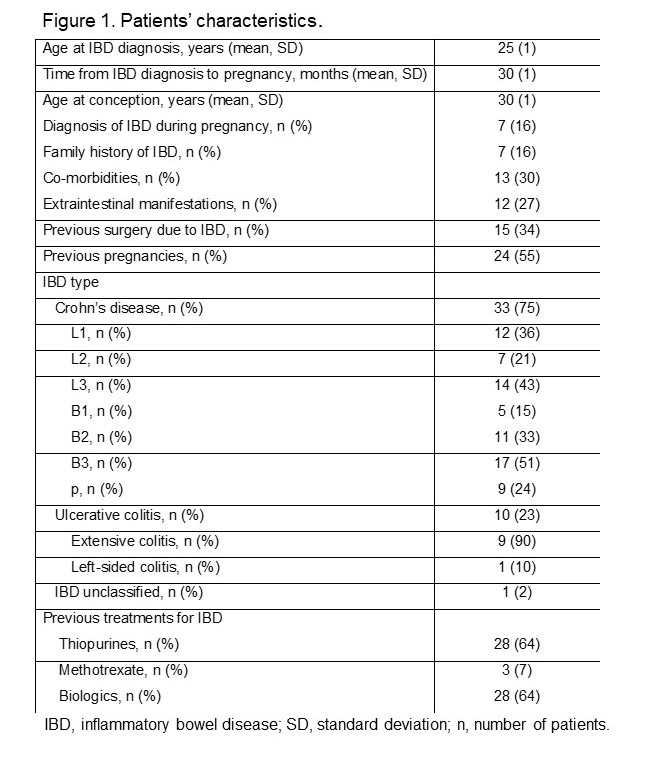 all singleton pregnancies. Seven patients (16%) were diagnosed with IBD during pregnancy, 75% had Crohn’s disease (51% fistulizing behavior), and 23% had ulcerative colitis. 34% had previously undergone surgery due to IBD. Several complementary examinations were performed during pregnancy without complications (figure 2) 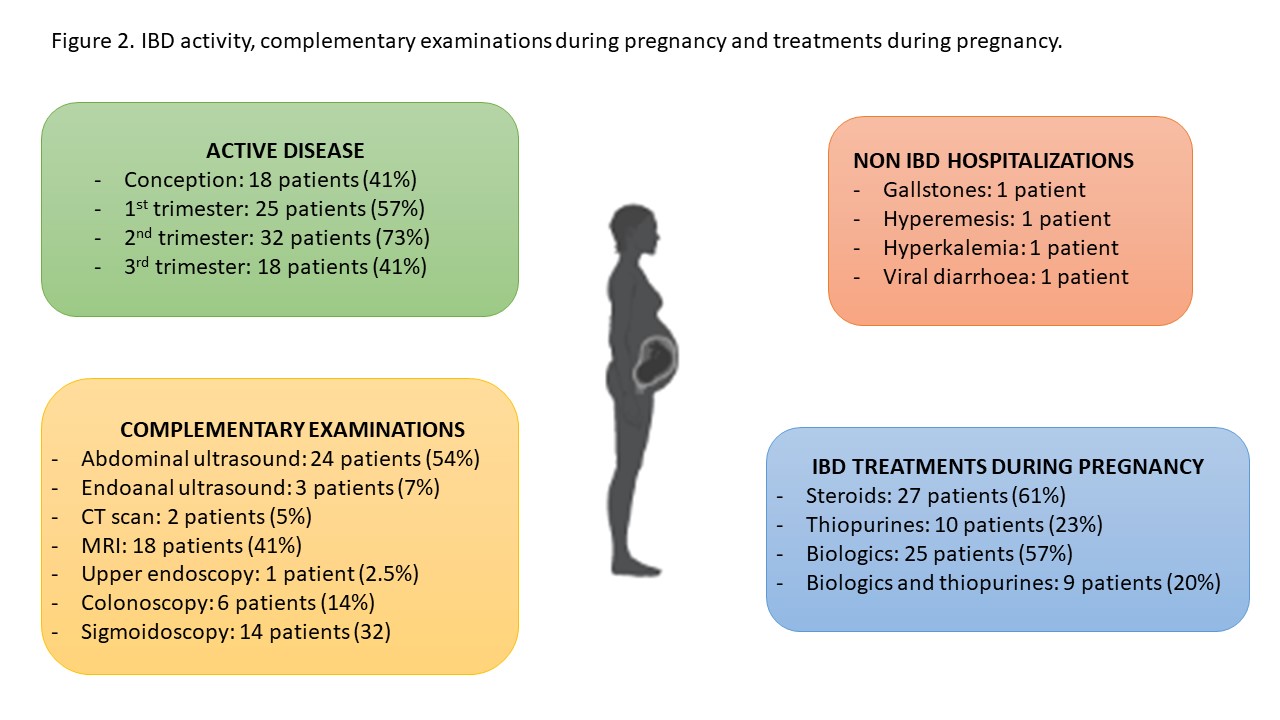 Patients were being administered the following medications: corticosteroids (61%), biologicals (57%), thiopurines (23%) with 20% being on biologics and thiopurines. 93% of surgeries were performed in University hospitals, (2nd Trimester: 55%; 3rd trimester: 27%) with 77% of them being urgent surgeries (figure 3) 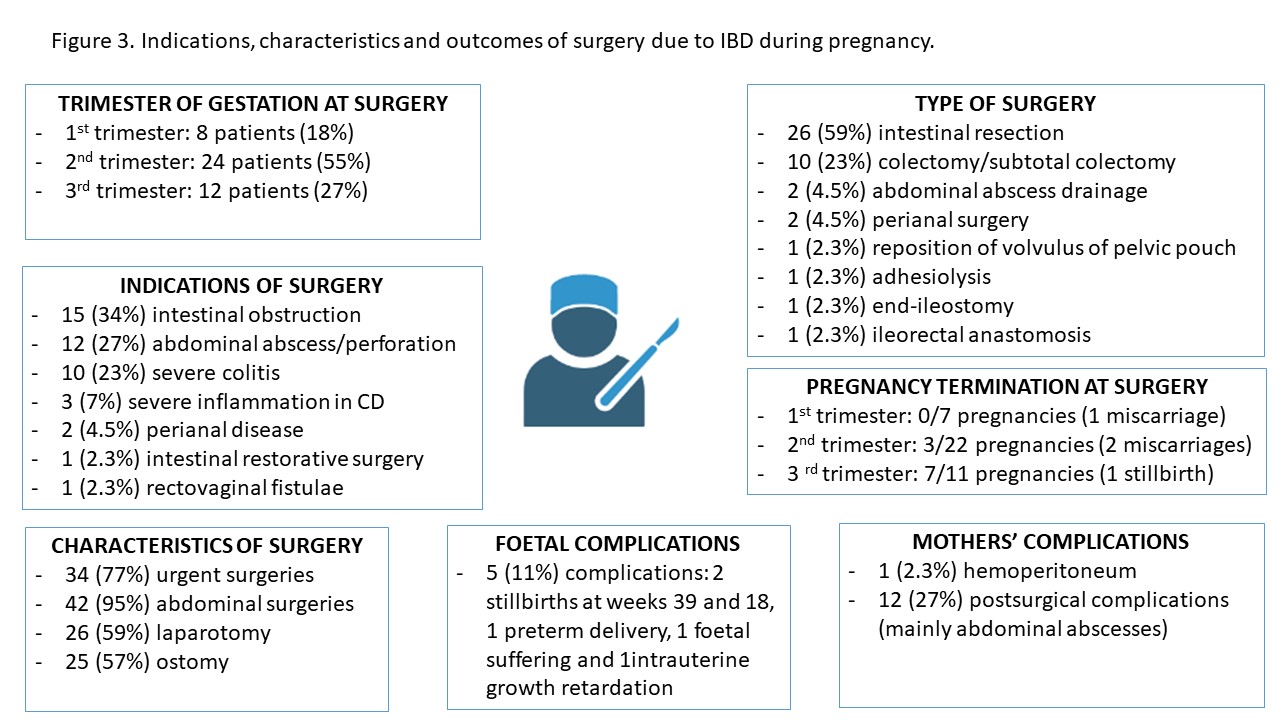 One patient had hemoperitoneum during surgery, and 27% had postsurgical complications. No woman died. 62.5% of deliveries were induced (figure 4), 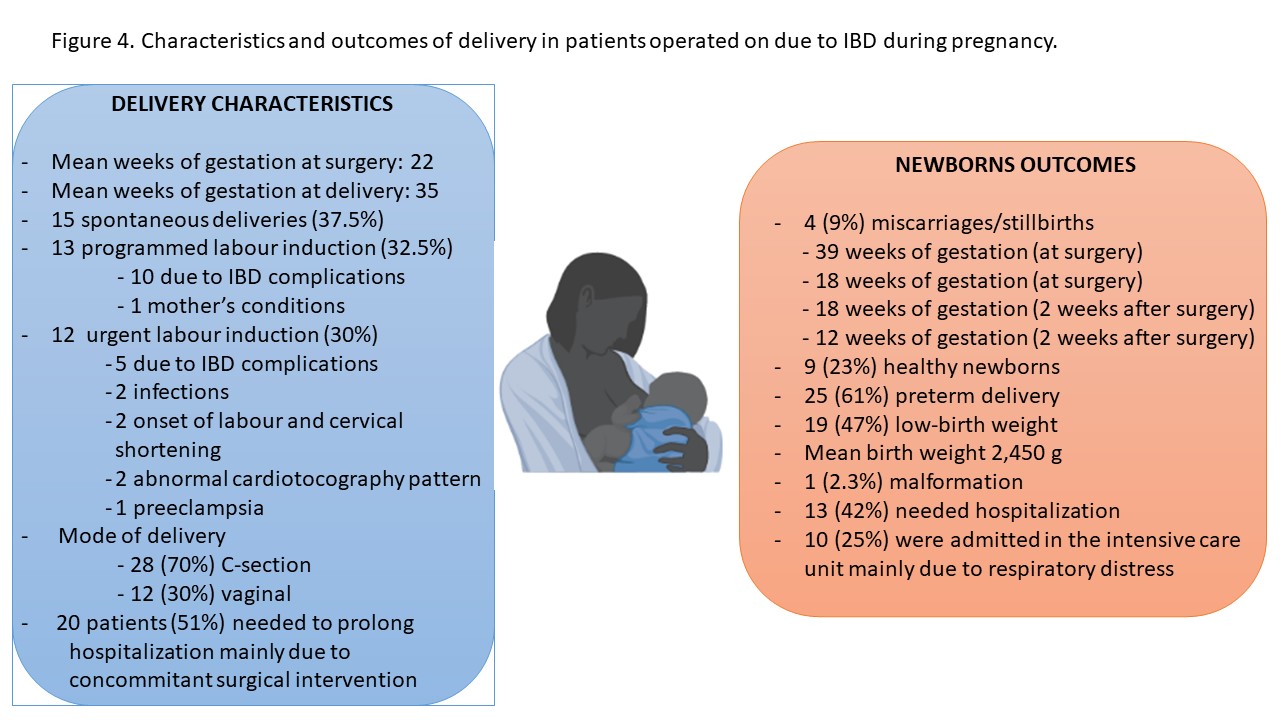 70% of them by C-section, with 51% of mothers having a prolonged hospitalization. There were 40 newborns alive and 4 miscarriages/stillbirths (1 in the 1st, 2 in the 2nd, and 1 in the 3rd trimester): 2 occurred during surgery and 2 occurred 2 weeks after surgery. 14% of the surgeries during the 2nd trimester and 64% of those in the 3rd trimester ended up with a simultaneous C-section or delivery.  Of the 40 newborns alive, there were 9 healthy (24%), 61% premature, and 47% with low birth weight. A total of 42% of newborns needed hospitalization (25% in the intensive care unit, mainly due to respiratory distress)

The need for surgery for IBD during pregnancy remains an extremely serious situation. Maternal and foetal mortality are lower than previously described, most likely due to better supporting care. However, even in the current years, 30% of the mothers and 80% of newborns have complications, and 25% of the offspring need admission to the intensive care unit. Therefore, surgical management should be performed by a multidisciplinary team, involving gastroenterologists, colorectal surgeons, obstetricians and neonatal specialists.