As part of the IBD-DICE (Determinants, Incidence and Consequences of CS Excess) collaborative research programme, this study examined rates of CS use and excess use in patients with IBD over time and after initial diagnosis.

Using IBM® MarketScan®, a representative claims database including details of >200 million individuals annually in the United States (US), we conducted a retrospective analysis of CS use from 2007 to 2018 in adult patients with IBD. Patients with conditions commonly associated with high levels of CS use (other than IBD) were excluded. CS use and excess were examined over calendar time in all patients (prevalent cohort), and in relation to the time of first IBD diagnosis in a newly diagnosed subset (incident cohort). Both a restrictive and a broader definition of CS use were examined. The restrictive definition only included claims for oral budesonide or prednisolone/prednisone with a pre-defined minimum daily equivalent dose of ≥17.5 mg, based on a typical tapering CS prescription for IBD. Under the broader definition, CS use was considered as any claim for oral prednisolone, prednisone, budesonide or methylprednisolone. Excess CS use was defined as either ≥2 CS courses in a 12-month period or ≥3 months of continuous CS use. 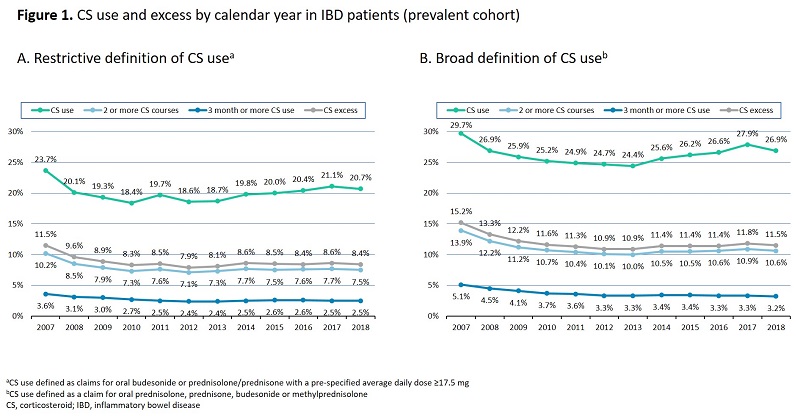 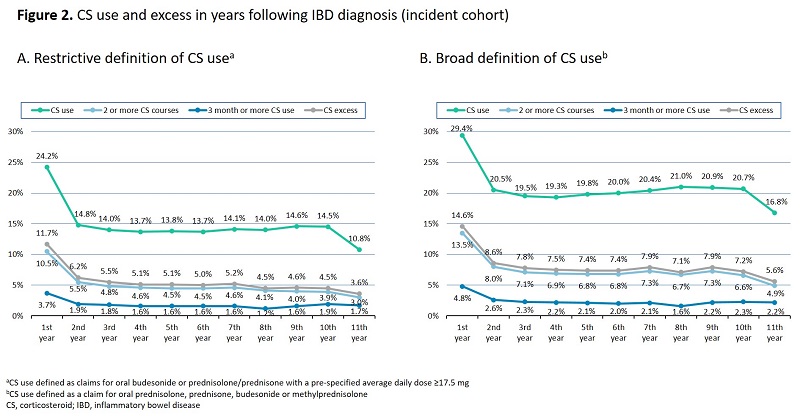 Despite advances in IBD treatment over the past decade and the adverse effects associated with CS, use of CS has not decreased substantially in the US in recent years. Levels of CS excess remain a concern, and may represent an opportunity for more optimised treatment and education, especially for newly diagnosed patients.