Perianal fistulas are common and cause significant quality of life impairment in patients (pts) with Crohn’s disease (CD). In previous phase 2/3 studies, ustekinumab (UST) showed some evidence of efficacy on fistula resolution, with no clear dose-response relationship. Additional studies are needed to evaluate the role of UST in perianal fistula treatment. Here, we report fistula data from two recent studies of UST in CD, SEAVUE and STARDUST.

In SEAVUE, biologic-naïve pts with moderate-to-severe CD were randomized to receive blinded UST (⁓6mg/kg IV at baseline then 90mg SC q8w) or adalimumab (ADA; 160/80mg SC at baseline/W2, then 40mg SC q2w). In STARDUST, biologic-naïve and biologic-failure pts with moderate-to-severe CD received open-label UST ⁓6mg/kg IV at baseline and UST 90mg SC at W8. At W16, pts were randomized to maintenance treatment under standard of care (90mg SC q12w or q8w) or treat-to-target (90mg SC q12w or q8w with potential adjustment to q4w) regimens. In both trials, the number of open and draining perianal fistulas was evaluated at baseline and the end of maintenance (SEAVUE W52, STARDUST W48). Fistula resolution was defined as closure of all fistulas. Pts with missing data at W52/W48 were considered to not have been in fistula resolution. In SEAVUE, pts who had a prohibited CD-related surgery, discontinued for lack of efficacy or an adverse event of worsening CD, or had prohibited concomitant medication changes before W52 were considered not to be in fistula resolution. 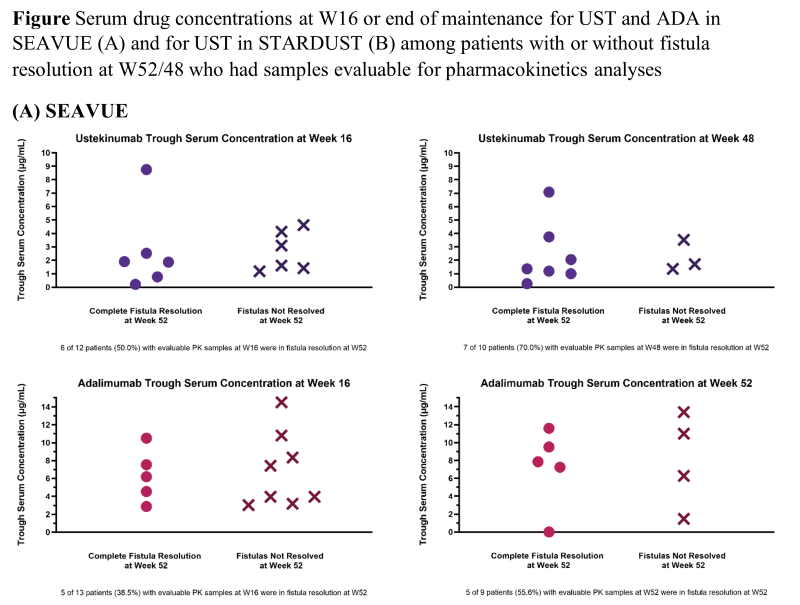 Of pts with perianal fistulas at baseline in SEAVUE and STARDUST who received UST (32 pts in total), half were in fistula resolution after ~1 year of maintenance treatment. No relationship was observed between fistula resolution and serum drug concentrations, but no definite conclusions can be drawn given the relatively small sample size.