We analysed the occurrence of infections with individuals treated with either budenoside (locally acting) or systemically available glucocorticoids (GC); prednisolone, prednisone and methylprednisolone. The risk of infection was divided according to the origin; viruses, bacteria, fungi and parasites and we assessed which virus and bacterium caused the most side-effects between locally and systemically acting GC.

In this analysis, infection reported outcomes with GC drugs reported to FAERS (USA) were extracted and compared to approximately 25’000 drugs in the database. Odds ratio (OR) and 95% confidence interval (CI) for the association of infections between budesonide and systemic GC. The data were classified into virus, bacteria, fungi, parasites and non-defined infections. The number of reported side-effects were ranked from highest to lowest, the 20 most reported viral and bacterial infection were assessed, respectively. All related terms for one species were combined e.g. “SARS-CoV-2” and “Coronavirus”.

The database contained 20’363 reports for budesonide, 35’452 for methylprednisolone, 60’516 for prednisolone and 102’982 for prednisone. Of these, a total of 4’465 concerned infection related AEs associated with the budesonide and 93’020 for systemic steroids. Bacteria and virus associated side-effects seemed to be more pronounced with the use of systemic GCs, while for fungal infections the risk was less prominent. Interestingly, budesonide users reported  less parasite infections compared to systemically GC treated patients (Fig. 1). The highest number of infections of viruses and bacteria were analysed (generic terms such as “Viral infection” were excluded).The most frequent reported viral infections were Herpes Viruses followed by Influenza, Hepatitis B Virus and SARS-CoV-2. Budesonide treated individuals have a lower risk for virus infections, except for influenza, Adenovirus and Respiratory Synctial Virus (Fig. 2); there was a reduced risk for all bacterial infections in budesonide treated patients, compared to systemic GC. The most reported bacterial infections were Mycobacterium Tuberculosis, Escheria Coli and Clostridium Difficile (Fig. 3). 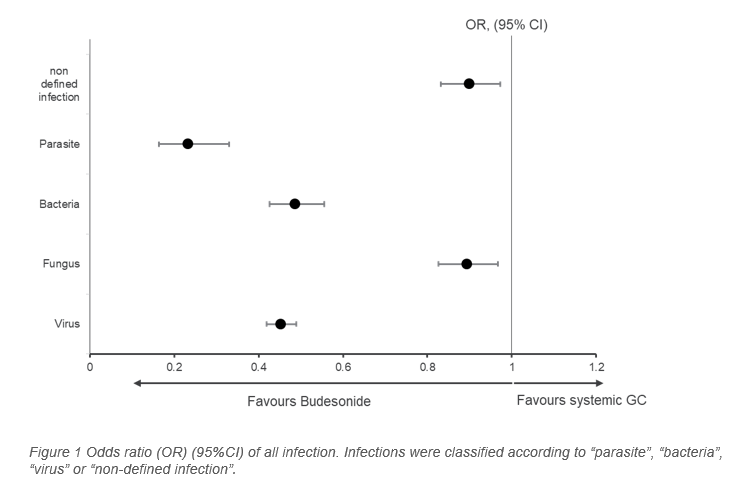 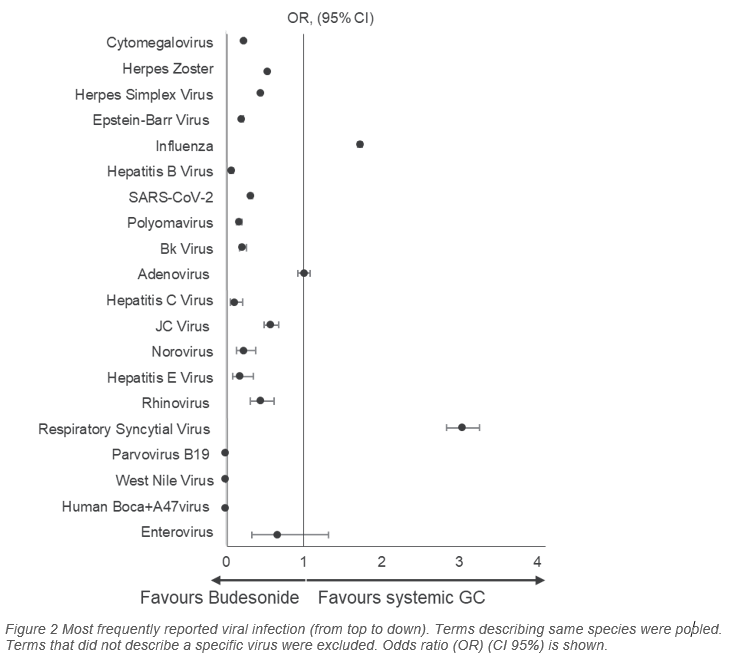 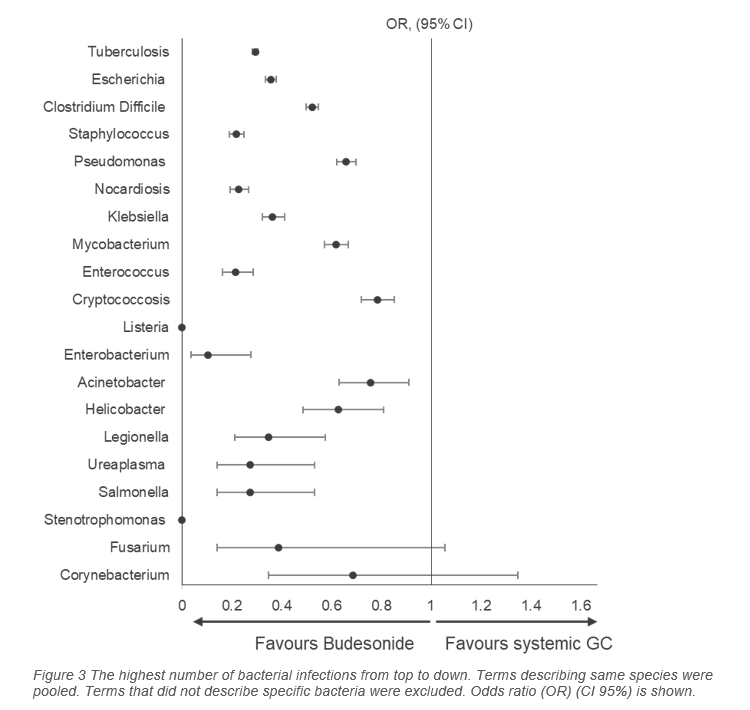 This unbiased analysis revealed that the use of budesonide was associated with a lower risk of infections of viruses, bacteria and parasites compared to systemic GC. In order to reduce the risk of infections, especially during the COVID-19 pandemic, inflammatory bowel disease patients should, where possible, switch from systemic GC to budesonide.