Early initiation of TNF-antagonist (aTNF) therapy for Crohn’s disease (CD) is associated with greater clinical and endoscopic improvement but trialing an immunomodulator (IM) first remains common in paediatrics. This study aimed to determine if early aTNF is superior to IM maintenance therapy in paediatric luminal CD.

Children 2-17 years old with newly diagnosed CD were enrolled prospectively at one of 12 sites of the Canadian Children IBD Network. Patients with luminal inflammatory disease receiving IM or aTNF-based first maintenance therapy, following induction with steroids, exclusive enteral nutrition (EEN), or aTNF, were included. Those with perianal disease as the sole indication for aTNF were excluded. The primary outcome was sustained steroid-free clinical remission, defined by the short Pediatric CD Activity Index, at 6, 12, and 18 months, while continuing initial maintenance. A secondary outcome was combined sustained steroid-free clinical and endoscopic remission by 18 months, defined as the absence of ulcers at follow-up colonoscopy when ulcers were present at baseline. Multivariable logistic regression modeled the propensity of receiving aTNF maintenance therapy and 1:1 Greedy matching, without replacement, was used to match each of the participants who received aTNF with a participant who received an IM. The primary outcome was analyzed in the whole cohort, and in the subgroup receiving steroids or EEN as induction, using a Chi-square test, as well as in the matched group with a McNemar’s test, generalized estimating equation (GEE), and with a mixed model to account for clustering by centre. Sensitivity analyses with inverse probability treatment weights using GEE were performed.

Among children with CD enrolled in the inception cohort study between 01/2014 and 12/2018, 464 met inclusion criteria and received IM (n=284) or aTNF (n=180 of whom 88 received steroids or EEN induction) as first maintenance therapy (Table 1). 162 patients were included in the matched cohort. In every analysis, more of the aTNF group achieved sustained 18-month steroid-free clinical remission, despite more severe baseline disease (Figure 1). The result remained significant in sensitivity analyses (Table 2). In patients with ulcers at baseline, 57.1% of the aTNF group versus 4.6% of the IM group achieved sustained steroid-free clinical remission and endoscopic remission by 18 months (p<0.001). 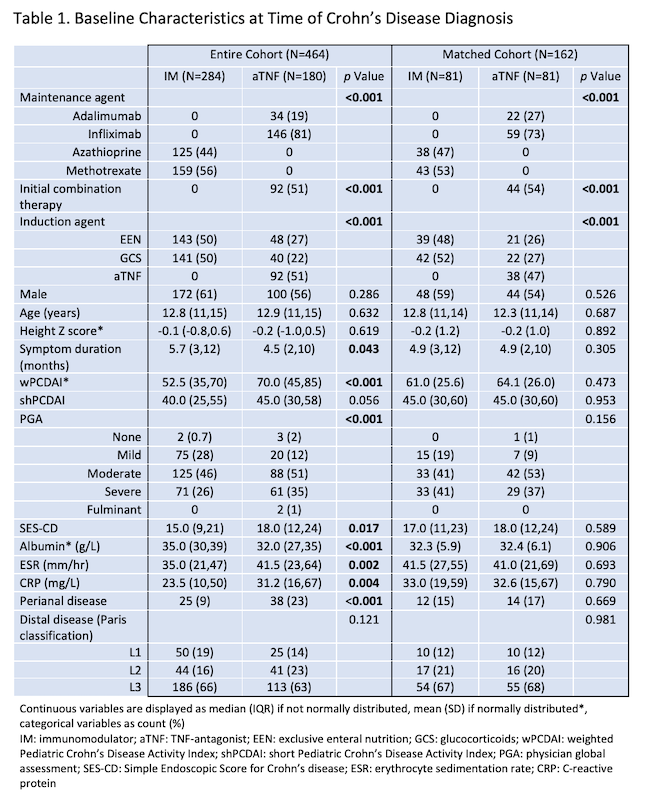 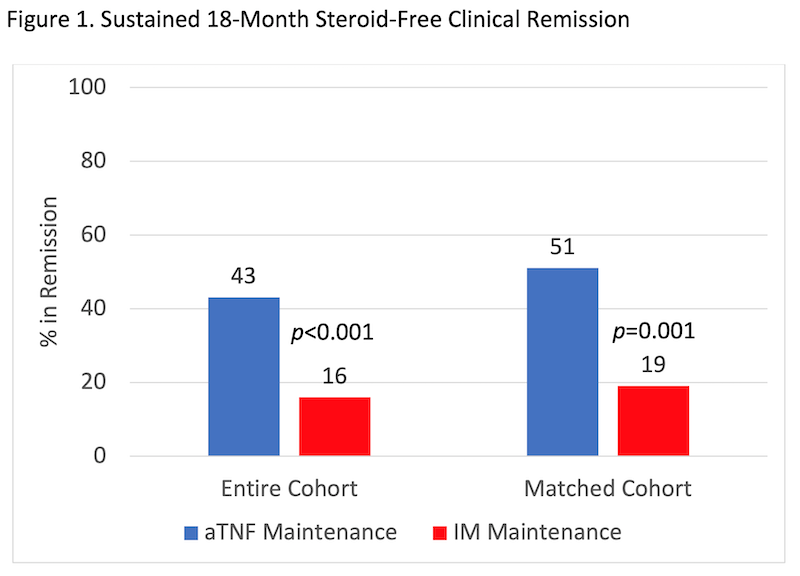 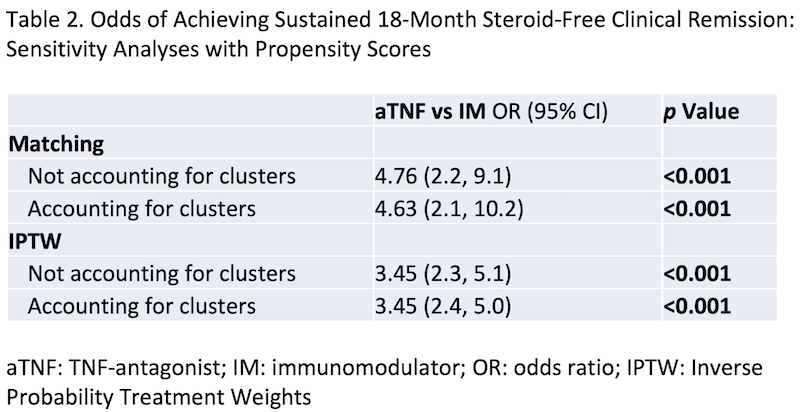 In this paediatric cohort, aTNF was superior to IM as first maintenance therapy. These results may help advocate for better access and funding for early aTNF therapy in paediatric CD.