Although transmural healing (TH) has not yet been considered a formal target in CD, it is considered a desired goal, as it seems to be associated with better outcomes. Early biologic treatment has been shown to lead to higher clinical remission and increased endoscopic healing. However, to date, there is no information on the impact of disease duration on TH. We aimed to assess the efficacy of early biologic treatment on the achievement of TH.

Unicentre retrospective cohort study comparing patients who started early and late biologic therapy (defined as ≤ 12 months vs > 12 months from diagnosis). We included patients with CD who were receiving biologic therapy, and had a baseline computed tomography enterography (CTE) or magnetic resonance enterography (MRE) before the initiation of a biologic (median 2.5, IQR 0-50 months), and a follow-up CTE/MRE performed 12 ± 6 months after therapy initiation. Endoscopic healing was defined as a SES-CD score <3. Three experienced radiologists blinded to the therapeutic group reviewed every CTE and MRE and assessed several pre-defined parameters of cross-sectional inflammation. TH was defined as the absence of active inflammation, extra-enteric signs, and CD-related complications (strictures, fistulas or abscesses). The effect of early biologic treatment on transmural healing was analysed using logistic regression.

60 patients were included (51.7% males), with a median age at diagnosis of 24.5 years old (IQR 17.5-32.5). Most patients had ileocolonic disease (58.3%) and non-stricturing non-penetrating phenotype (60%). Twenty-eight patients (46.7%) started biologic therapy within the first 12 months of diagnosis. There were no significant differences in baseline clinical features or baseline radiologic assessment between the groups, except for the extension of the most affected segment, which was higher in the group of late biologic therapy (197 vs 129.5mm, p=0.05) (Table 1). Patients on early biologic treatment achieved endoscopic healing more frequently than those on late biologic treatment (65.4% vs 23.3%, p=0.002). Early biologic treatment was also associated with increased transmural healing (OR 4.1, 95% CI 1.2-13.6, p=0.02). In a multivariate model including baseline characteristics of the disease, only the use of biologics within the first 12 months and the absence of ileocolonic disease were significant predictors of the achievement of transmural healing (Figure 1). 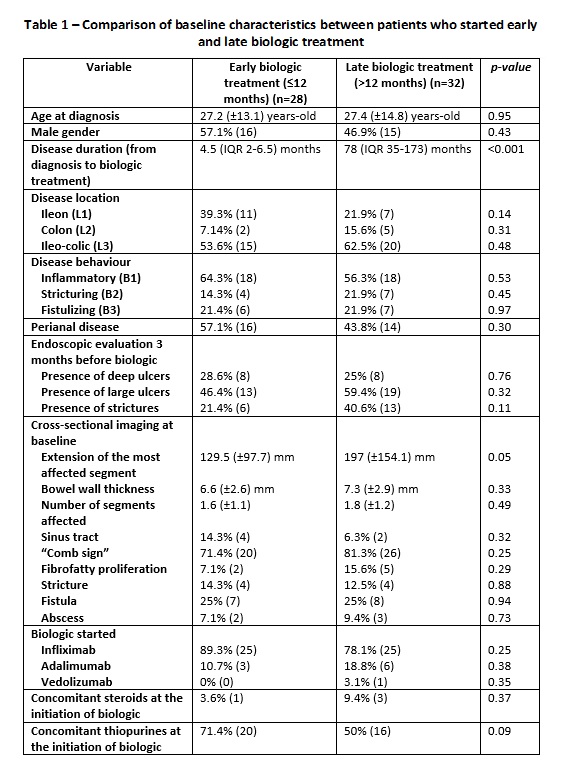 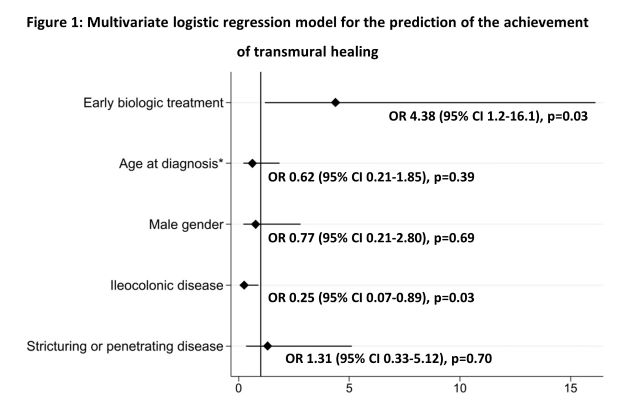 Early biologic treatment seems to be independently associated with higher transmural healing rates, further adding to the relevance of early intervention in CD. Our findings are limited by the small sample size and short follow-up.