Telemedicine is one of the major changes that clinicians have encountered over the past decade; in particular during the COVID-19 pandemic, televisits were rapidly implemented to guarantee patients’ assistance, with the intention of Health Care Providers (HCPs) to continue to use them beyond the pandemic.
The aim of our national survey was to evaluate the current usage of telemedicine for IBD patients from their perspective, investigating patients’ impressions about telemedicine and factors affecting them through a Machine Learning (ML) analysis.

In March 2021, the Italian IBD patients’ association (AMICI Onlus) distributed to their members - through its mailing list and on social media platforms - an anonymous online questionnaire investigating the use of telemedicine.
Socio-demographic and IBD characteristics were collected; the usage, patients’ satisfaction and trust of telemedicine were assessed through Likert scales.
ML tools - Decision Trees (DT) and Random Forest (RF) - were applied to identify the determinants of patient's perceptions about telemedicine; the produced RF ranking displays two indicators: %IncMSE and IncNodePurity.

Nine hundred and seventy-eight IBD patients (women 58.9%) from every Italian region completed the questionnaire.
Among the respondents, 87 (8.9%) personally had a telemedicine experience; 153 reported that their Centre performed a telemedicine service during the COVID-19 pandemic (24.2% televisits, 39.2% e-mails, 24.8% phone-calls, 3.9 % dedicated website, 7.9% others).
Overall, 707 (72.3%) would trust a telemedicine service, 760 (77.7%) would like to have it also with another HCP (e.g., nutritionist, psychologist) and 778/961 (81%) would like to use telemedicine in the future (17 did not answer to this specific question); 792 (81%) stated they thought useful to have the possibility to use telemedicine and 847 (86.6%) would like their Centre to offer them this facility.
Considering this last question as the output at the DT, the variable which have been found to influence the most this patients' willingness is patient’s perception of the usefulness of telemedicine in treating their disease, since it represented the root of the tree explaining the results. The RF rankings confirmed that this variable influenced the most patients’ perception with the highest levels of %IncMSE and IncNodePurity(Figure 1). 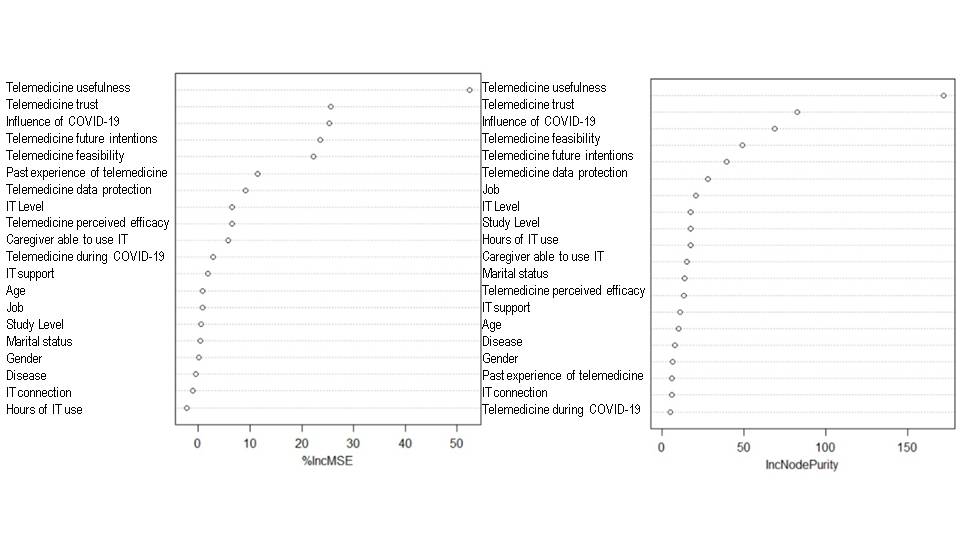 The practice of telemedicine in the management of IBD patients has not been very relevant throughout Italy so far (less than 10%), but more than four every five respondents would like to use telemedicine.
Machine learning analysis shows that the perceived usefulness of telemedicine service is the key point for patients who would like it was a part of usual clinical practice.